Soaring arias and human aspirations in ‘A Comedy of Tenors’ | Lifestyle.INQ ❮ ❯ 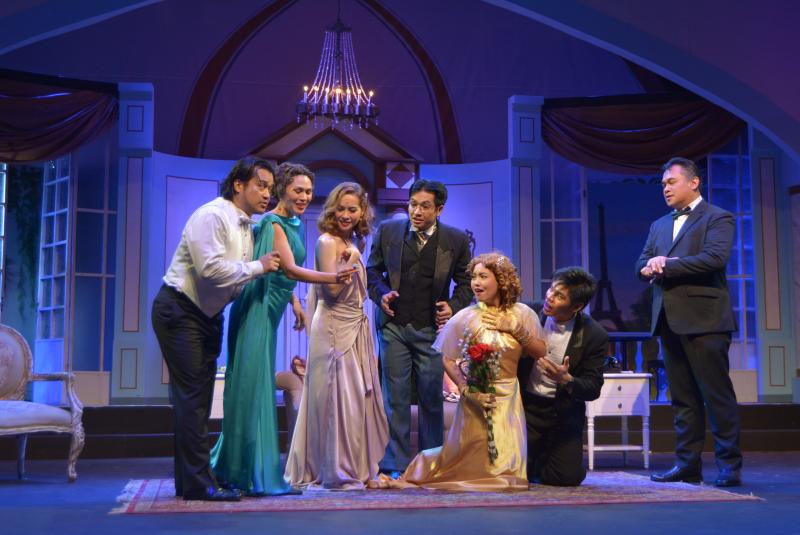 Soaring arias and human aspirations in ‘A Comedy of Tenors’

There’s no business like show business, and in the case of Repertory Philippines’ “A Comedy of Tenors,” the show must go on even when operatic tensions run high.

The production, directed by Miguel Faustmann, is a sequel to veteran playwright Ken Ludwig’s Tony-nominated work, “Lend Me A Tenor,” although for the uninitiated, the material easily stands on its own.

Henry Saunders (Jeremy Domingo) is a sort of 1930s Paris Cameron Mackintosh, the impresario behind the upcoming concert of Italian phenomenon Tito Merelli (Lorenz Martinez). Merelli is fast losing his luminary status to the rising sensation Carlo Nucci (Arman Ferrer). Unbeknownst to Tito, Nucci is also the red-blooded beau of his only daughter Mimi (Mica Pineda), with the duo’s clandestine relationship literally uncovered in a well-timed twist of fate.

Due to a series of sartorial blunders, Tito mistakenly assumes that his wife Maria (Issa Litton) is having an affair and disappears in a furious huff, leaving Saunders on a suicidal tightrope with his singing assistant, Max (Noel Rayos). Things complicate further with the inopportune arrival of Tito’s former flame, the alluring Russian diva Tatiana Racon (Shiela Valderrama-Martinez).

Lorenz Martinez is once again in stellar form, his Tito possessing both the hilarity and wistfulness of a male Norma Desmond. Ferrer’s crisp tenor, on the other hand, slices through “La Traviata’s” “Brindisi” in the rehearsal scene, while Litton’s Maria spews animated lines off “Tosca,” “La Boheme” and “Madama Butterfly.”

For his part, Domingo brings out a bossy, boisterous edge to Saunders, but he occasionally falls flat in comedic timing (especially in the initial scenes involving tongue and scattered bits of underwear). Domingo redeems himself in the second act with his evolution from impassioned impresario to affectionate grandfather.

The play’s direction feels rushed at times, with the result that a few precious puns are lost on the audience. The set is a decent attempt to recreate the ritzy interiors of a Parisian luxury suite, boasting tamed pastel hues, gilded furniture and even a sparkly Art Deco chandelier.

Sticking out like a sore thumb is the lackluster depiction of the ubiquitous Eiffel Tower panorama, which appears hewn off a regular gallery exhibit.

Beneath the gaffes and multi-octave guffaws, “A Comedy of Tenors” reaches out and tugs at our hearts’ deep desires. We identify ourselves with Mimi, a young actress who is only too ecstatic to portray a humble peasant begging from Marie Antoinette in the upcoming titular film. With Saunders, we retrace our bucolic journeys from a remote Ohio town with only one piano, subsequently vowing to become a world-class producer in due time.

And by highlighting the tender moment of Max on the phone, his wife wracked with labor pains in another continent, the play spotlights the sad plight of many performers who often have to be separated from their families and loved ones during special occasions.

In a fitting culmination marked by bright lights and rousing applause, the characters manage to reconcile their differences and deliver the “O Sole Mio” performance of a lifetime. In a separate corner, a lone spotlight casts a soft glow on Max, savoring the quiet bliss of his new role as a father.

When all else is said and done, these two contrasting worlds make us see the play for what it truly is—a comedy of arias and aspirations, fortissimos and forgiveness.