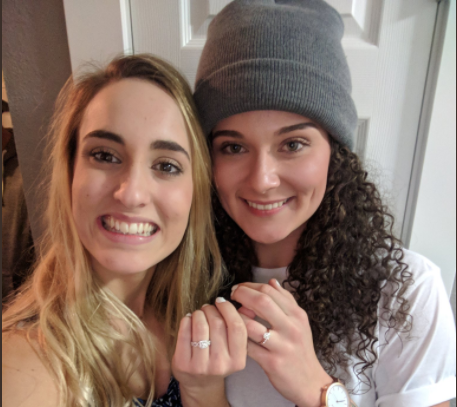 Lesbian couple surprisingly propose to each other at the same time

It usually only happens in the movies, but things turned out for the best for lesbian couple Tori Monaco and Berkley Cade when they serendipitously proposed to each other at the same time through a game of Pictionary.

The perfect moment was captured on video and uploaded on Twitter by the couple’s friend, Sydney (@33_Syd) last Feb.10. “Double proposal playing Pictionary,” wrote Sydney. “So amazing & I’m so happy for you 2. This was so perfect.”

In the video, Monaco can be seen trying to guess Cade’s drawing on the board when she suddenly went down on her knee to present Cade a ring. Cade, in disbelief, also pulled out a box of ring from her bag, and got down on her knee, too, to face Monaco.

Double proposal playing Pictionary 😭 so amazing & I’m so happy for you 2💖 this was so perfect 😭😍 @BerkleyCade @Toorriiiiiiiiii pic.twitter.com/uG7R5UIQNm

It seems like a double yes came out of the double proposal as Monaco tweeted a picture of them wearing the engagement rings in Feb. 10, officially making them each other’s fiancees.

“I PLANNED A PROPOSAL FOR MONTHS,” wrote Monaco. “Little did I know she planned one too! #doubleproposal #lgbt.”

Cade shared on Twitter last Feb. 11 that it took her around four months to keep her proposal a secret. “After 4 LONG months of keeping this secret.. turns out Tori McKynzi Marie Monaco was keeping one too,” gushed Cade. “I cannot wait to marry the woman of my dreams. I love you forever baby.”

The two are obviously still over the moon about their serendipitous double proposal as they try to address all their well wishers who were just as floored and ecstatic about the surreal turn of events. Talk about being the ultimate kindred spirits. Congratulations to the newly engaged! JB