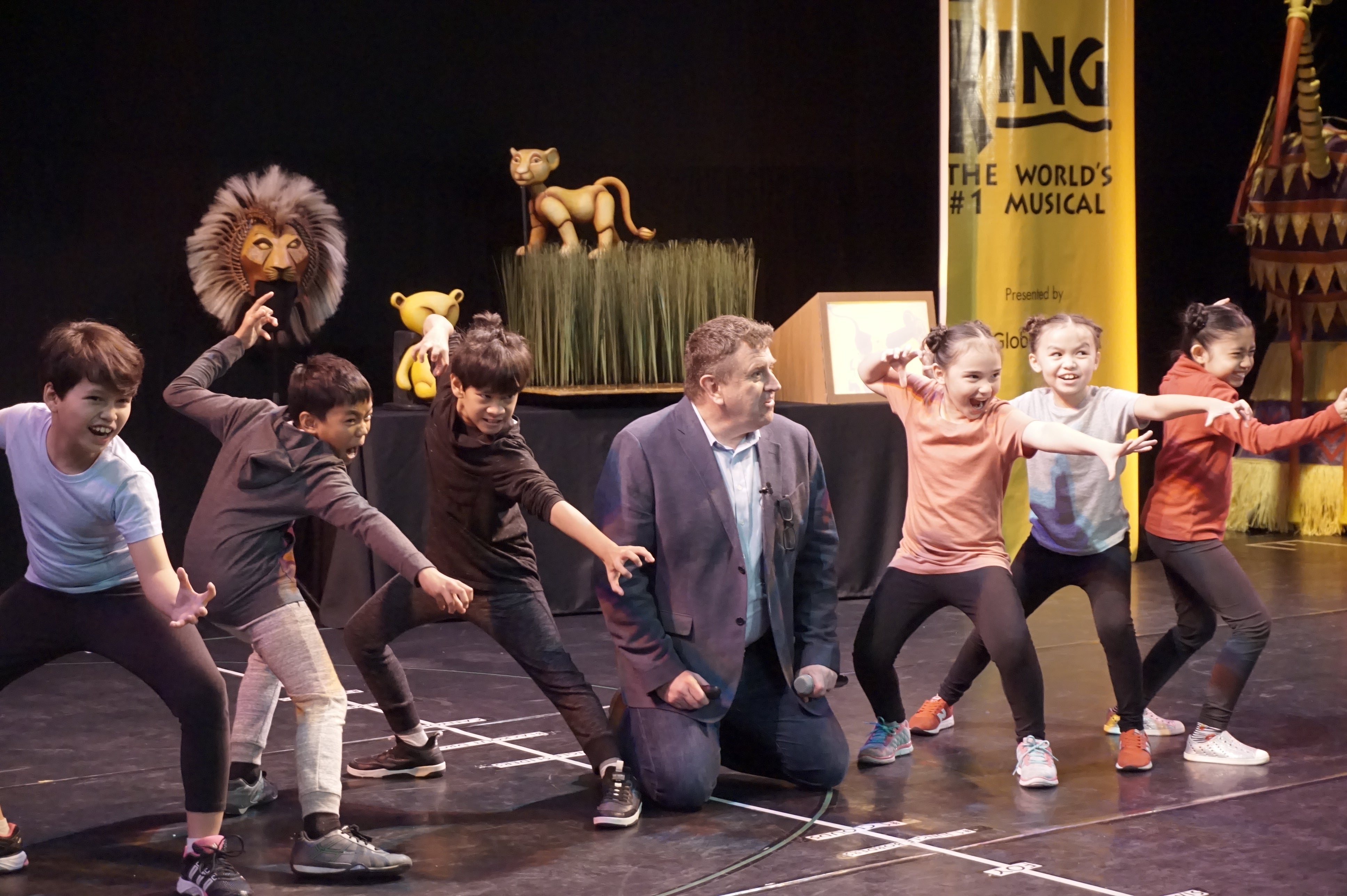 WATCH: The international touring company of The Lion King – Musical performs “Circle of Life” during the open rehearsal at Star Theater in Pasay City. Ntsepa Pitjeng (Rafiki) leads the 51-cast ensemble. The show runs from March 18 to May 6 at The Theatre at Solaire. Video by Nikka G. Valenzuela

The powerful chant in the beginning of “The Circle of Life” is so enduring that it is easily recognizable from the first note. The Zulu intro to Disney’s “The Lion King”—which translates to “Here comes a lion”—ushers an image of the sun rising over the savanna and animals gathering before Pride Rock.

Over 90 million people have seen the theatrical production of “The Lion King.” After two decades, the blockbuster has earned $8 billion and over 70 awards. Now, “The Lion King” is finally playing in Manila—the first leg of its first-ever international tour. The musical runs March 18-May 6 at The Theatre at Solaire.

Don’t think for a second that because you’ve seen the movie, you’ve seen it all. Julie Taymor’s adaptation of the Disney classic makes “The Lion King” musical a different experience altogether.

Associate director Anthony Lyn, who has been at the helm of the production since 1999, dished out details about the musical during a recent open rehearsal at Star Theater.

1) Who hasn’t seen the film “The Lion King?” Julie Taymor, apparently. The Tony Award-winning director had not seen the 1994 hit movie until she was tasked to recreate the musical on stage.

“When she watched it, the thing that struck her over and over again was the humanity of the story,” Lyn told the media.

2) But how do you represent animals on stage?

“Julie’s concept was surprisingly revolutionary, but it comes from a very ancient tradition, most of which is from this part of the world. It was what we call a double event,” Lyn said.

A double event is having an animal representation while the actor remains visible to the audience. The idea was to show the animalistic nature as well as the human emotions of the character at the same time.

Taymor knew how to pull this off. She had gone to Japan to study puppetry and theater, and also in Indonesia where she became a theater director.

“You can see the dancer standing inside the cheetah’s legs, while attached to her head are wires and cables that go to the head of the cheetah,” explained Lyn. “She’s also controlling the front legs with poles. So the movement, the sensuality, the animalistic qualities of the dancer is dictated through the puppet, and the puppet is dictated to by the quality of the dancer.”

3) Not to be outdone are the lions. Mufasa’s mask is perfect and symmetrical, symbolic of the circle of life, while Scar’s mask is distorted. When these masks are lowered, the mighty beasts shift to warrior mode.

“When Scar sometimes wishes to hide his very human emotions, the mask comes down. It’s a very clever device that can go back up so they can go back to being human,” Lyn said.

4) “The Lion King” is also no stranger to puppet malfunction.

There’s also a spare puppet ready to replace anything broken. Grimm said his biggest nightmare is when the show stops because of a malfunction—something that has never happened.

An entire department is devoted to the care and maintenance of the 200 animal puppets.

These puppets represent 25 animals—a herd of gazelles, giraffes (the actors are on stilts), the “Hakuna Matata” duo Timon and Pumbaa, and the red-billed hornbill Zazu who looks like an English butler.

The puppets arrived from Canada and Shanghai in container vans.

5) Members of the 51-cast ensemble also came from different parts of the world, including the Philippines.

Felicity Napuli, 11, Uma Martin, 8, and Sheena Bentoy, 8, alternate as Young Nala. The girls have starred in “Matilda The Musical.”

Meanwhile, British actor Antony Lawrence (Scar) said he kind of empathizes with the manipulative animal he plays, being the youngest in his family.

South African Khanyile is a big fan of Rafiki in the movie.

“First time I saw the film, I was in primary school and I really connected with the Rafiki character because I was a bit of a clown myself,” he said. I remember they were singing in Zulu and I was like, wait a minute, I know what they’re saying.”

Perhaps one of the biggest departures from the movie is the wise old baboon Rafiki.

Taymor turned Rafiki into a woman shaman, true to many African cultures where the religious leader is a woman. Ntsepa Pitjeng is soft spoken, but at the rehearsal she belted out a goose bumps-inducing performance of “The Circle of Life.”