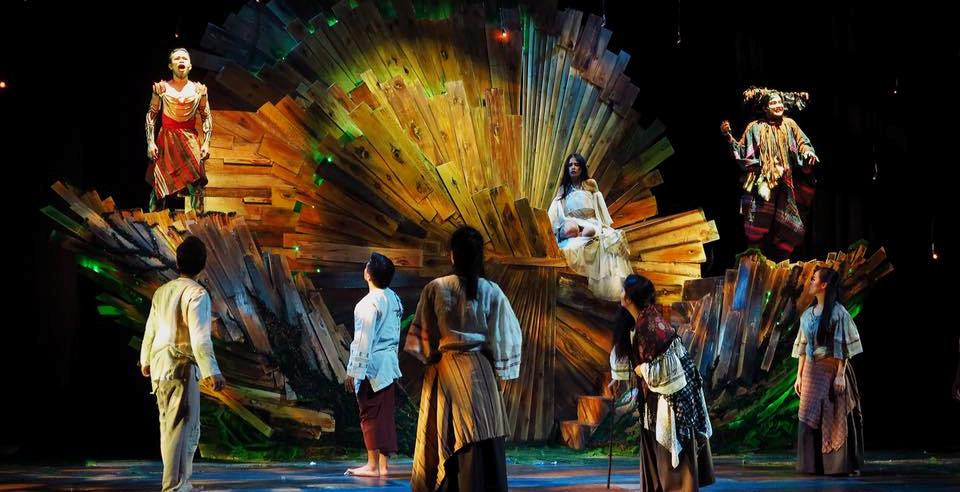 In Tanghalang Pilipino’s “Nang Dalawin ng Pag-ibig si Juan Tamad,” adapted by Rody Vera from the Nick Joaquin children’s story, the titular character does not even figure prominently until halfway into this musical.

Most of the stage time is devoted to a low-stakes game high up in the clouds, between Mt. Banahaw and Mt. Makiling, anthropomorphized from the pages of Filipino lore like high school kids unversed in the naughty, nasty business of romance.

The temperamental Banahaw, feeling spurned by Makiling, attempts to put her under a love potion’s spell that would make her fall for the ugliest person in the world. Thus ensues the hilarity of Makiling doting on the clueless Juan, set intermittently to TJ Ramos’ original compositions.

If the story sounds simple enough, it really is—which means that what immediately strikes the viewer by curtain call is the unnecessary length of this work. For a musical that runs only close to 90 minutes, the telling sure takes a long time.

The narrative is unable to disguise its thinness, even with all the gimmickry and fluff, and Ramos’ songs never feel integral or propulsive. (Absent the song-and-dance numbers, this “musical” might in fact benefit from the newfound brevity.)

Still, what unfolds on the Tanghalang Aurelio Tolentino stage is not without cause for some cheer.

In his directorial debut, Jonathan Tadioan manages an oftentimes able, occasionally beguiling mix of lofty myth and earthly rusticity, allowing an undercurrent of surprise to shape the otherwise insipid story.

And Marco Viaña, in his first foray into set design, has come up with an impressive centerpiece that looks like the love child of a scallop shell and anahaw (footstool palm leaf), instantly clueing the audience in on the local folkloric setting.

On this visually textured set, Ybes Bagadiong (as Juan) and Manok Nellas (as Makiling) take center stage for the first time, the latter running away with an impressive performance that at once screams fierce goddess and shy school girl, and holding its own against Aldo Vencilao’s brash, brutish Banahaw.

Where this production really wins, however, is in its brand of comedy, and the way it unfailingly connects with its audience. The afternoon we watched, the mostly student viewers reveled in the writing’s self-aware humor, with its broken fourth walls and gags drawn from noon-time variety shows and pop culture (for instance, Antonette Go, brief but hysterical as a Kris Aquino-esque lawyer).

The fun is ultimately infectious. When the abrupt ending comes, the faults beneath this production’s surface are difficult to ignore. Everything starts to feel rudimentary, but also strangely satisfying, like the intoxicating free fall of first love. —CONTRIBUTED