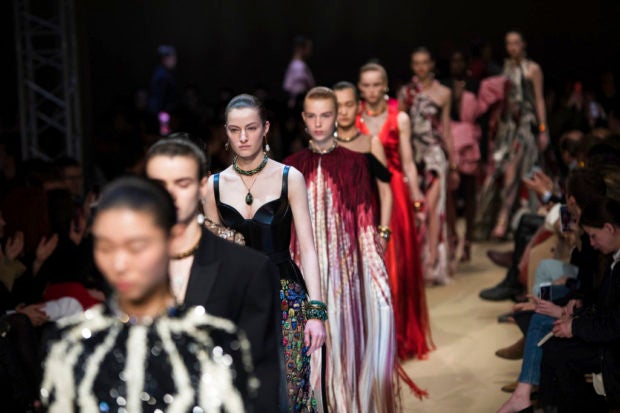 PARIS  — In a fall-winter season that’s featured a fair share of fur on the runway in spite of growing resistance, Stella McCartney’s show was the ecological antidote at Paris Fashion Week.

Guests including actresses Kristin Scott Thomas and Isabelle Huppert were served up green juices with spirulina before the McCartney’s beautifully uplifting leather-and-fur-free collection inside the ornate Paris Opera.

Here are some highlights of Monday’s shows, including Giambattista Valli and Alexander McQueen.

There’s so much to feel good about in a Stella McCartney show. Monday’s ever-imaginative styles used artful deconstruction to produce a fresh fusion of menswear and womenswear styles.

A man’s suit was turned inside out and turned into a fluid dress with bare seams. Suit pants were cut at the knee as if they’d been guillotined. And a minimalist gray waistcoat featured a chic couture-like peplum silhouette.

Statement knitwear was a key theme. Traditional Aran sweaters — in big cable knit — hit a surreal note in multicolor with huge sleeves that made the arms completely disappear.

McCartney, a famed vegan, thus proved you don’t need fur to be glamorous and stay warm in winter.

The 46 styles were served up with an uplifting, foot-tapping soundtrack that provoked a moment of humor.
“Where the hell’s my phone?” it boomed out. “You’re holding it.”

iPhone-addicted influencers smiled in a moment of self-reflection.

Stella McCartney joined the legion of fashion houses — such as Givenchy and Saint Laurent — which are now showcasing designs for men during the womenswear week.

The merging styles maximize the commercial impact for each season, but they also serve to blur gender lines and encourage the world to not see gender (and dressing) as so binary.

Monday’s show marked the official launch of the British-American designer’s menswear capsule with eight looks modeled on men. They styles — like a big blown-up check coat and an oversize cable knit sweater — mirrored many of the women’s styles.

Long, flowing and graceful were the silhouettes of the season for Giambattista Valli — who attracted socialite Olivia Palermo to his front row in the concrete labyrinth basement of Paris’ Palais de Tokyo.

The venue lent itself more to chaos than grace — and many guests were given erroneous seats or otherwise got lost.
Yet when the beautifully-executed collection began, it was all about patterns — more than making up for the earlier confusion. Checks, “GBV” monograms, florals, dots and thick stripes gave a kinesis to the styles, which had a feel for the 70s.

The ethnic styles in that era were a design touchstone — such as geometric markings on a bodice or myriad hanging pendants.

Center parts and glittery face paint on the models combined with these styles to evoke a very chic Woodstock hippie.

Luxury is one of France’ most prized industries, worth an estimated $22 billion.

French President Emmanuel Macron and his wife Brigitte were engaging in some high-profile Fashion Week diplomacy by hosting a star-studded dinner at the Elysee Palace on Monday night called “Choose France”.

It’s an event aimed at promoting investment in the French luxury industry.

Guests are expected to include young designers as well as established figures such as Lebanese designer Elie Saab as well as Louis Vuitton’s creative director Nicolas Ghesquiere, who dresses France’s first lady.

The age of email doesn’t seem to have left a mark on the fashion industry’s antiquated system of invitations.

Famed eco-warrior Stella McCartney’s invite was among the wackiest, comprising of a vacuum-packed pair of bright yellow socks.

“These socks are made re-purposing post-consumer and post-industrial textile waste to create high-quality up-cycled years through a process that uses zero water, zero dyes and no harsh chemicals,” said the invitation.

Some fashion insiders were seen wearing the socks that were made of 85 percent recycled textiles.

Japanese fashion guru Yohji Yamamoto’s invitation, meanwhile, was of practical use for fashionistas who rush from show to show. It was a makeup mirror that could be hung round the neck.

Transformation was at the core of Sarah Burton’s fashion ode Monday night.

The Alexander McQueen designer used the idea of the metamorphosing insect — a softly armored Scarab beetle or a butterfly — and creatively flew with it.

Silk dresses with a vivid, all-encompassing butterfly print gave way to unfurling black leather bustiers and sections of colorful material that peeped out underneath a black tuxedo like butterfly wings emerging from a black cocoon.

But the roving imaginative explorations were handled tightly. It was a collection that stuck closely to the house’s signature silhouettes of strong shoulders, narrow waists and exaggerated hip sections.

The idea of the insect transformation was also metaphorical from Burton, who’s known as an “intellectual” designer. It produced the strongest parts of the collection.

A tight black military coat cut an interesting style on model Stella Tennant as it transformed into a billowing striped, fringed poncho at the hem.

A fashion show is a five-minute window that shapes how a brand is viewed for the next half year — the most intense manifestation of image in an image-driven industry.

There was thus much consternation at Parisian house Leonard when one of the giant letters of the show decor fell as artistic director Christine Phung came out to acknowledge applause after the chic, floral-infused collection.

Phung was seemingly unaware that the moment was less than picture-perfect: the “R” in “LEONARD” at the foot of the runway had come loose and was captured by the press. MKH

Is sustainability the latest fashion trend?