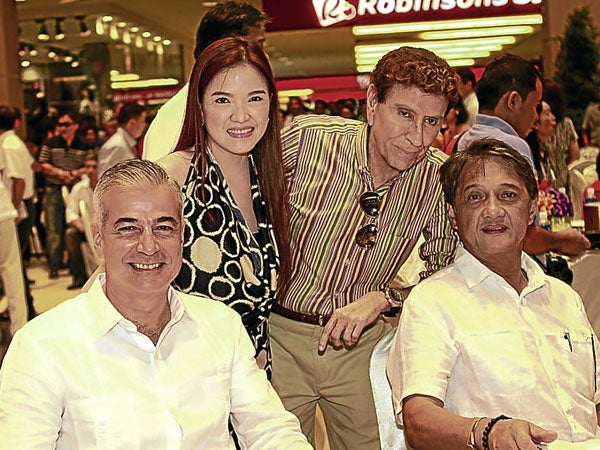 Despite the start of the typhoon season, Iloilo’s top society chronicler and Philippine Tatler correspondent Nonoy Ybiernas and moi found ourselves getting ready for a trip down south, for the grand inauguration of the awesome 10-hectare Abreeza Mall owned and managed by Ayala Land and Anflocor in Davao City.

The one-hour-and-45-minute flight via Philippine Airlines Boeing 747-400 was very pleasant, what with the super-charming ground personnel at the PAL counter, southern lady Daryl Castro and eye-catching supervisor Noli Marigomen, Jerold Palacios facilitated our check-in, saving us the stress.

Davao City is truly fantastic, buzzing with commerce. It also has gorgeous beaches and rugged hills and peaks that make for a spectacular view from our window at the ultra luxurious Marco Polo Hotel, dahlings.

Our exciting visit to Davao was thanks to the invitation of my dear palangga, businesswoman Mags Calpito-Cue, of Cagayan de Oro City. She’s the woman behind the highly successful Mags brand of ladies apparel, bags, footwear and accessories.

The latest branch of Mags opened at the posh Abreeza Mall in downtown Davao City with moi, and gorgeous and talented actress Angel Aquino, as guests of honor.

We were an hour late since we had to inch our way to Abreeza amid a mob—and I mean a mob—that had gathered for the opening of the boutique.

The instant we dashed in, Angel was literally mobbed by the fans. After reaching the third level where Mags is located, we finally did the obligatory ribbon-snipping, and the guests flocked to Angel for photo ops.

Once she had obliged all autograph seekers, Angel rushed off to the airport to catch the last flight back to Manille. But not till we had loads of laughs with hilarious Nonoy Y. keeping us all in stitches, palanggas.

Aprés we promised to keep in touched, Angel left. Meanwhile, we drove off to the fantastic AHFAT Chinese Seafood Restaurant at Plaza Victoria, in the Bejada District. It was so good that moi insisted that we ate there for the next two nights. I gained two pounds from my bingeing out in Davao.

After a great time, I thanked our fantastic hostess Mags, who jumped into her van accompanied by her friend, Arlene Mendoza, dedicated events specialist, for the five-hour drive back to Cagayan de Oro. Moi took the PAL flight back to Manille while Nonoy Ybiernas took the flight to Iloilo.

Now, a flashback of the awesome opening of Abreeza Mall, palanggas.

It was a breezy day, perfect for the grand opening of Ayala’s latest, superbly designed shopping center. It offers a wide range of popular local and foreign fashion and lifestyle brands, including of course, Mags.

Abreeza is anchored by Robinsons Department Store and Supermarket, palanggas.

True to its name, Abreeza Mall has that relaxed and contemporary feel. Its architecture, blends with open spaces and verdant landscaping.

Abreeza is a project of Accendo Commercial Corp., a joint-venture company between Ayala Land Inc. and Anflo Group of Companies.

When it comes to eating healthy without batting an eyelash, Century Tuna leads the pack, dahlings.

From its renowned canned tuna to its other canned products such as milkfish, Century Tuna now offers the Healthylicious Hotdog! The first yummy hotdog in the market with, take note, real tuna, the product was launched to a full house of excited guests who couldn’t wait to munch on the juicy taste of hotdog with the healthy goodness of tuna.

“Based on our research, 100 percent of households buy hotdog,” said Greg H. Banzon, vice president and GM of Century Canning Corp., a health buff himself. “It has become a ‘default’ food and a favorite not just of kids but f adults, too. We’ve reinvented hotdog by putting a healthy twist to provide young adult consumers who are into a healthy lifestyle a nutritious yet tasty alternative to include in their healthy diet.”

The brand presented its endorser—hunk-of-the-moment Aljur Abrenica. Its new TV commercial shows the actor “as a man-child who is no longer a baby, but is able to enjoy his childhood favorites like hotdog, now given a healthy twist, thanks to Century Tuna,” explained senior product manager Angela Gamboa.

Tuna in a hotdog? Yes! After all, nothing is impossible with Century Tuna.