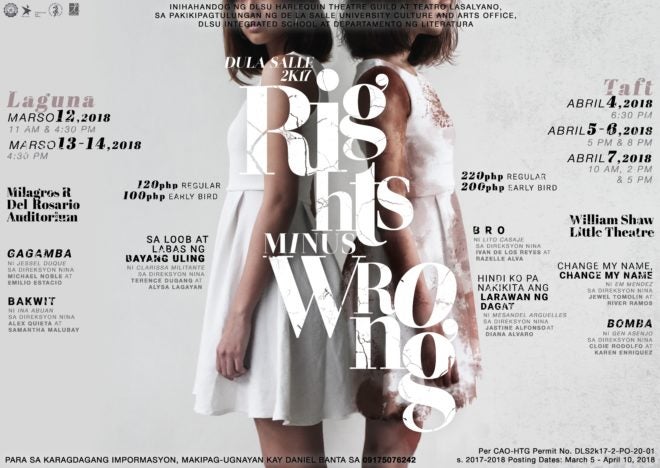 At the DLSU Taft campus, the plays include:

“Bomba”: The privatization of a local water pump in Sityo Pinagpala leads to a confrontation between two ex-lovers and revelations about the water pump.

“Bro”: During a neophyte’s initiation to join the Alpha Xi brotherhood, something goes horribly wrong that will test the integrity of the brothers and change their lives forever.

“Change My Name, Change My Name”: A transgender woman argues her way into getting her name changed at the local municipal hall.

This program will run April 4-7 at the William Shaw Little Theater.

At the Laguna campus, the program will feature:

“Bakwit”: A volunteer teacher decides to save up money so she can bring her students to a local museum, but unfortunate circumstances arise.

“Gagamba”: A 10-year-old boy’s family history of squatting and possible involvement in rash robberies in the neighborhood has left his family home in danger.

“Sa Loob at Labas ng Bayang Uling”: After months of gruesome labor under an abusive overlord, a sickly worker catches a glimpse of the outside world and plans a revolt against the dictator.

This program will be staged March 12-14 at Milagros Del Rosario Auditorium.