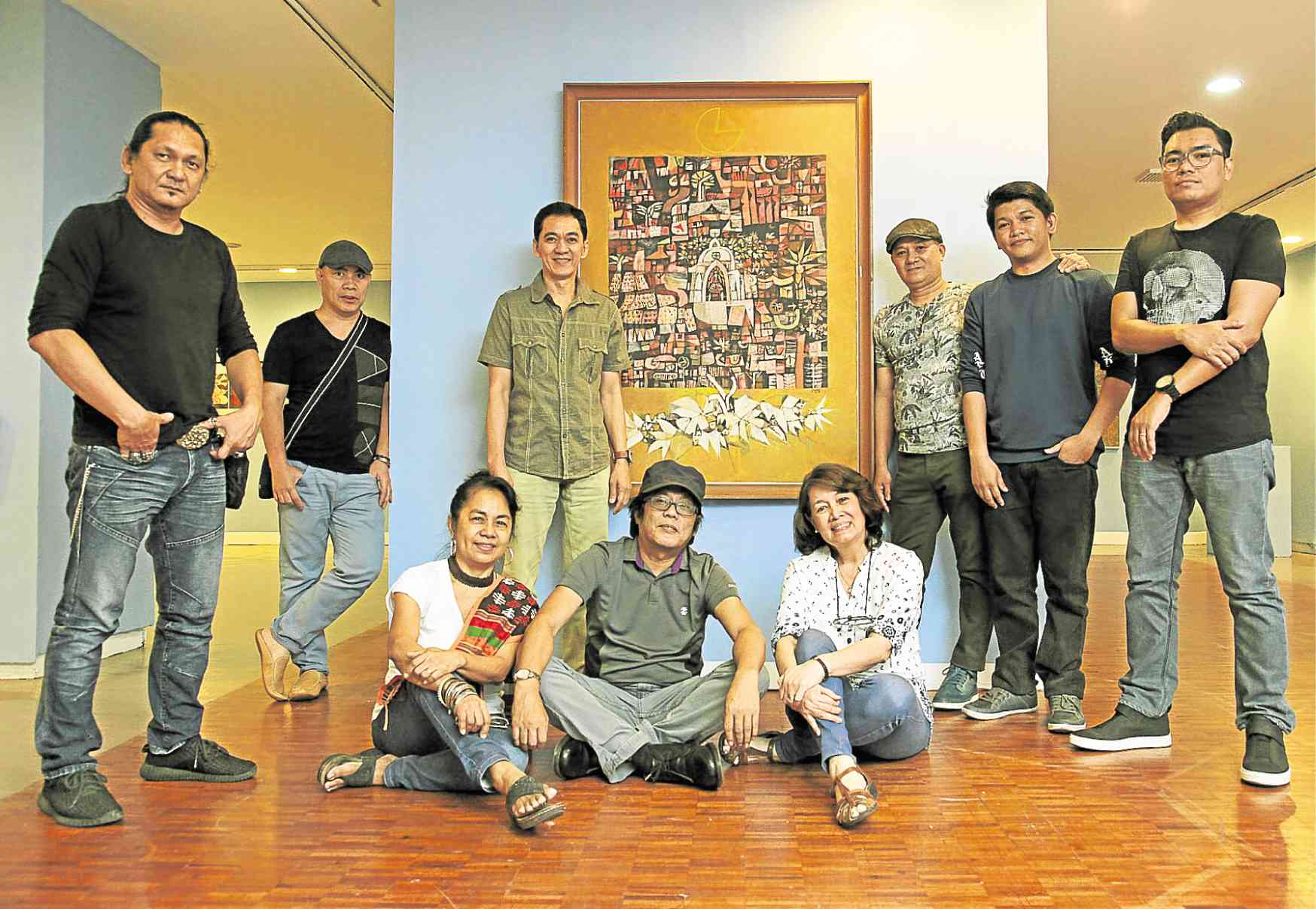 The Saturday Group: 50 years of camaraderie for art

Groups or clubs that were informally organized on the basis of friendship and common careers seldom last up to 50 years. And less rarely do they develop into a large and influential institution that bestows a certain prestige for any person who gets to be a member.

The Saturday Group, an organization of esteemed Filipino artists, is one of the rare gems that get to observe its golden anniversary. Its members are celebrating the milestone with a special exhibit dubbed “Saturday Group Gold: Celebrating 50 Years in Art.”

The show opened March 3 (on a Saturday, of course) at the Juan Luna Gallery of the Cultural Center of the Philippines (CCP). Showcasing the works of the founding members and current members, the exhibit will run for two months.

The group’s current president Omi Reyes said it usually celebrates anniversaries with an exhibit. “But since this is going to be the group’s 50th anniversary, we had to do something really special this year.”

“Really special” is an understatement, since Reyes and each of his fellow members will be showcasing their finest works, which means more than 60 paintings will be on exhibit. And to further underscore the importance of this milestone, the chosen venue of this landmark show just had to be the Juan Luna Gallery of the CCP. No other venue would do.

It was in July 1968 when the Saturday Group was founded by a handful of prominent artists who enjoyed each other’s company every week at a restaurant in Ermita, the Taza de Oro along Roxas Boulevard. Its beginnings may seem humble, but the list of names was as illustrious as it could get—
H. R. Ocampo, Cesar Legaspi, Ang Kiukok and BenCab, among others.

Members met every Saturday afternoon to bond and indulge in shoptalk and sketching sessions. And yet, exhibit curator Ricky Francisco said the group later managed to change the face of the local art scene for the better by introducing interactive painting activities and organizing fundraising projects to assist artists having financial difficulties.

Perhaps many of the original members never realized that, like their own works of art, the group would be as exalted as the country’s premier art organization by both the new generation of artists and connoisseurs of art.

They also never dreamed that it would become a duly registered nonprofit association with its own bylaws. Or that it now has its very own art gallery at the Shangri-La Plaza.

Previous president Buds Convocar said that since the exhibit will also showcase the works of the original founding members, eight of the paintings in the show are by National Artists. They are represented by works that happen to be part of the collection of the CCP Visual Arts and Museum Division.

Francisco says “Saturday Group Gold” will present a chronology of the artists over the group’s 50 years of existence.
“They will be grouped according to who was the leader during their membership, which begins with the founding members under the group’s first recognized leader, H.R. Ocampo,” he explained.

Thus, visitors to the show get the opportunity to learn about the Saturday Group’s history and numerous accomplishments in the first part of the exhibit, which is composed of archival material. This includes various memorabilia, photos of get-togethers, projects and exhibits, news clippings about their activities, and their paintings that are now part of the collection of the CCP.

According to Francisco, the show honors the past 50 years of the group through archival material; the scheduled nude and interactive painting sessions for its members; and “the intangible bonds of friendship and camaraderie that enabled the group to persist despite differences in personalities and organizational growth.

The next section of the exhibit highlights the paintings of the current members.

Rica Estrada, officer-in-charge of the CCP Visual Arts and Museum Division, said that since the CCP is not in the business of selling artworks, none of the paintings in the show will be for sale. “It’s going to be a celebration of the art of some of our finest artists. We didn’t compute the monetary value of the paintings. What is important is the cultural value.”

On opening day, the members convened at the Juan Luna gallery for their first activity. They continued with the tradition of having an interactive sketching session, with the human form as the subject.

The opening ceremonies were hosted by the group officers, led by Reyes.

One of the primary ingredients that helped make the Saturday Group last for 50 years is the unique camaraderie between its members. People who happened to drop by the Luna Gallery prior to the opening of “Saturday Group Gold” had the chance to witness this happy comradeship, as they helped move and organize the paintings.

As Concovar pointed out, “pakikisama” is the central characteristic every member must have. This showed in the way he and colleagues Omi Reyes and Roel Obemio worked together for this endeavor. It inspired confidence that, perhaps in the next 50 years, more artists will still be looking forward to their Saturdays together. –CONTRIBUTED