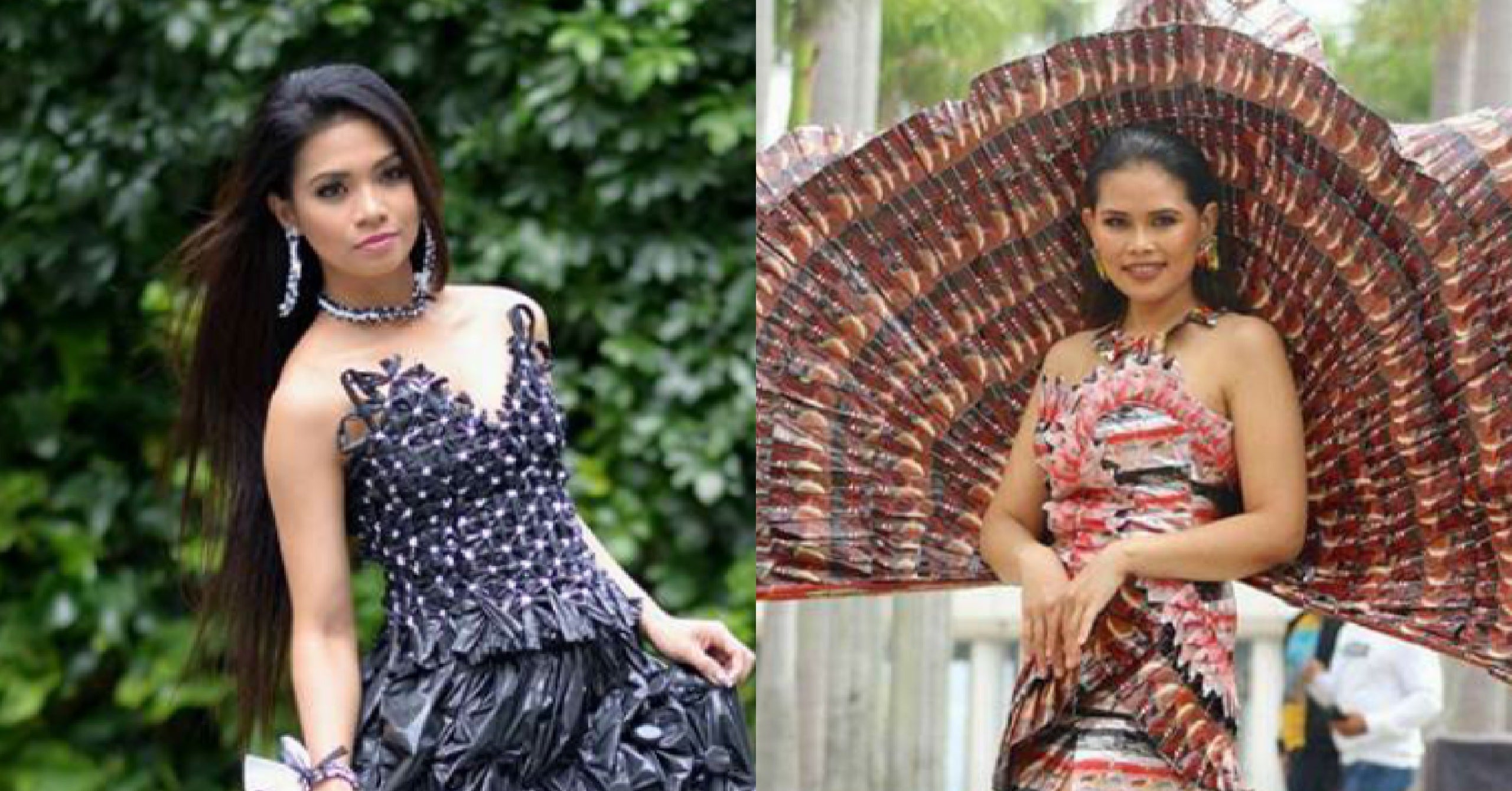 A domestic worker based in Hong Kong is proving through fashion that a dash of creativity and painstaking work can transform trash.

Elpidia “Elpie” A. Malicsi is showcasing her upcycled couture gowns at the Philippine Consulate’s office in Hong Kong as part of the National Women’s Month celebration.

According to the Department of Foreign Affairs (DFA), the materials used include “discarded garbage bags, coffee sachets and soda can tabs.” These were collected by volunteer students from the University of Hong Kong.

The exhibit ties in the thrust of sustainability with “labor rights, decent work and household service workers’ creative contributions to Hong Kong culture.”

“Filipino workers should hone their talents and skills while employed here in Hong Kong so that upon their return to the Philippines, they can use these to achieve their financial and personal goals and aspirations for themselves and their families back home,” said Consul General Antonio A. Morales.

A University of Hong Kong student, Yuedian Zhao, documented visitors’ reactions during the launch. “One lady stayed there for a long time, left and brought her friends back again,” she wrote in a Facebook post. “She wishes that Elpie’s design could be promoted so that everybody can afford a wedding gown.”

“The feeling of witnessing the straws in our uni canteens becoming a pretty gown is wonderful,” she added.

Malicsi is 60 years old and works on the gowns outdoors, particularly near a Starbucks outlet at the office tower Jardine House, reports Post Magazine.

On Feb. 25, the exhibit was promoted through a mobile catwalk in various parts of the city such as  Chater Road and Causeway Bay. Volunteers helped organize the catwalk: models, event supporters, photographers and makeup artists included Filipino domestic workers, Indonesians and Chinese university students.

#SustainableSundayCouture Mobile Catwalk! Not too late to join. The Day is amazing!

One of the volunteer photographers was Filipino domestic worker Joan Pabona, whose photo “Sacrifice” was runner-up in the National Geographic Wheelock Properties Youth Competition 2017.

A senior woman at a train station was in awe of one of the gowns made from black garbage bags. The model explained to her in Cantonese what the material was. In disbelief, she replied, “Isn’t it! Beautiful!”

Another woman in Causeway Bay stopped models to photograph them and was in tears when she learned Malicsi was the designer. When Malicsi told her she was a domestic helper, the woman replied, “That’s your work. We all work. We all have jobs. But, this is you! You are great.”  /ra

OFW mothers in Hong Kong sing for their distant children