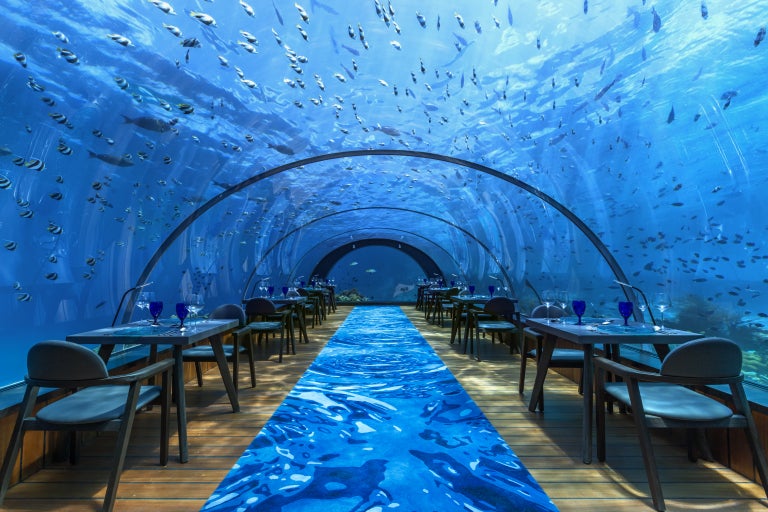 An underwater restaurant in the Maldives that offers panoramic views of its tropical marine underworld will serve as the picturesque milieu of serenity for a group of privileged yogis.

Nearly six meters below the surface, at the Hurawalhi Maldives’ 5.8 restaurant — the world’s largest all-glass undersea restaurant named after its underwater depth in meters — participants will roll out their mats for what’s being called the world’s first undersea yoga event.

During the one-hour vinyasa flow class, yoga instructor Jessica Olie will lead participants in a unique session performing downward dogs and, perhaps, the fish or dolphin pose, surrounded by schools of colorful, tropical fish swimming in a liquid azure sky.

The goal of the vinyasa flow class will be to “improve flexibility, boost muscle strength, power up the immune system and produce an inner calm.”

The class is suitable for both beginners and advanced yogis alike and takes place March 17.

If the Maldives is slightly out of reach, you might want to keep tabs on the Lole White Tour which organizes worldwide yoga tours in unexpected places.

In the past, the Montreal-based yoga apparel company has organized events at major landmarks and spaces around the world, including the Eiffel Tower, Central Park in New York, The Royal Ontario Museum in Toronto, and the Olympic Stadium in Montreal. JB

In Colombia, birders find their version of Eden