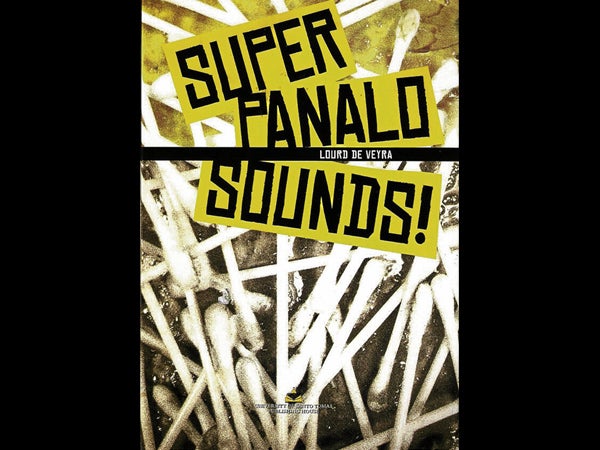 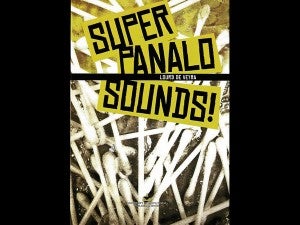 What strikes you about “Superpanalo Sounds!” (UST Publishing, 2011) as you read the first lines is…the sound. Not sound in the aural sense but the clear, crisp word descriptions of sound—the kind you get from someone who remains part of today’s local literary and music scene.

“Times are when nothing stands between man and his misery except a faint, unintelligible sound which he read somewhere was called a ‘skronk’—a harsh brassy squeak that evoked metal, wooden reed and air being pushed to their physical extremes. Milo felt that it was the sound that embodied his soul, a sound that captured all the grotesque beauty of the world around him: the roar of traffic, the clashing voice from the wet market nearby, the din of the neighbors’ TV and radio in full blast.”

“Superpanalo Sounds!” is the first novel of rock band Radioactive Sago Project’s frontman and award-winning writer Lourd de Veyra, he of the spoken word or the poetry style that combines music and words (usually social commentaries) played (or recited) with a live band. The back page blurb gives an idea of the trip it prepared the reader to embark on: “(it) is a mind-opening, world-altering cautionary tale of how high and low you can go when you’re rocking and rolling.”

De Veyra pulled off his debut as a novelist well. Like his poetry and essays where slices of life and social commentaries are presented in bare, stripped-down verses and sentences, the novel is a veritable obra by an artist whose music and words he is famous for mold the very fabric of this full-length fiction.

So expect the cacophonic ring of his words in a tale of a band where the drug-addled brains of its members push their medicated creative juices while trying to hold onto their dysfunctional affairs with uncaring people as they produce a brand of music for screaming fans who love them.

“One summer afternoon in 1995 at a Cubao rehearsal studio that smelled of used gym socks, Milo David, Dax Dimaculangan, Budik Hanopol, Zorro Nareja and Vic Zenarosa circumvented the traditions of harmonies and tempos to give birth to an exciting new sound.”

The novel’s plot is tight and simple. It is the story of a rock band’s creation and its short spurting rise as a music celebrity to its tragic crashing descent to oblivion, gathering along the way a toll on life and relationships. De Veyra’s fictional band’s world is a world of drugs cocktailed in bodies and minds and expelled in blasts of creativity and expression of music coupled with explosions of emotions from guts and feelings made more thick and daring by chemicals in the bloodstream.

The humor and, later, pathos of the work lies in the way the band members try to live their lives before, during and after their less-than-meteoric rise to fame: Saxophonist Milo David, jazzman to the core and failure as a spouse and father; Bassist Budik Hanopol, the one with the talent for a musical career with brains fried by unregulated use of acid; Guitarist Dax Dimaculangan, musical genius whose compositions are results of pure talent and the colors and sounds of alcohol and drugs; Percussionist Zorro Nareja, the band’s “glue” who tries to keep things sane and normal with the group; and, Vic Zenarosa—activist, vocalist and torn-up soul. There are other characters like drug pusher Kadyo and washed-out band player and pseudo-record producer Malcolm Maclalang who add color to the band’s story.

Though the book claims to be a work of fiction, De Veyra’s eye for the factual is craftily slipped in from time to time and blends with the creative fiction. Telling, of course, is his narrative of the rise and fall of Filipino rock icon Joey “Pepe” Smith. This interplay of fact in the world of Philippine music lends an air of authenticity to the story of the “Superpanalo Sounds.”

A word of caution to the reader: read beyond the drugs. At first, you might think you are reading a William Burroughs-kind of story (I am referring, of course, to the dope head writer whose drug-influenced writing experiments made it to the realm of American fiction). Do not be misled. The writing is purely De Veyra. And that is only part of the fun of reading the novel. It is more than merely looking at the lifestyles of musicians, it is feeling the frustration of what are obviously unsatisfactory lives of physical pain and heartbreaks.

The year 2011 has been a good one for De Veyra and the UST Publishing House. This new novel has clearly drawn a new path for them. And with the successful launch of De Veyra’s other works (one, his new collection of poetry also published by UST and the other a collection of his online essays by another publishing firm), “Superpanalo Sounds!” caps off a collection of literary works his followers will surely enjoy.