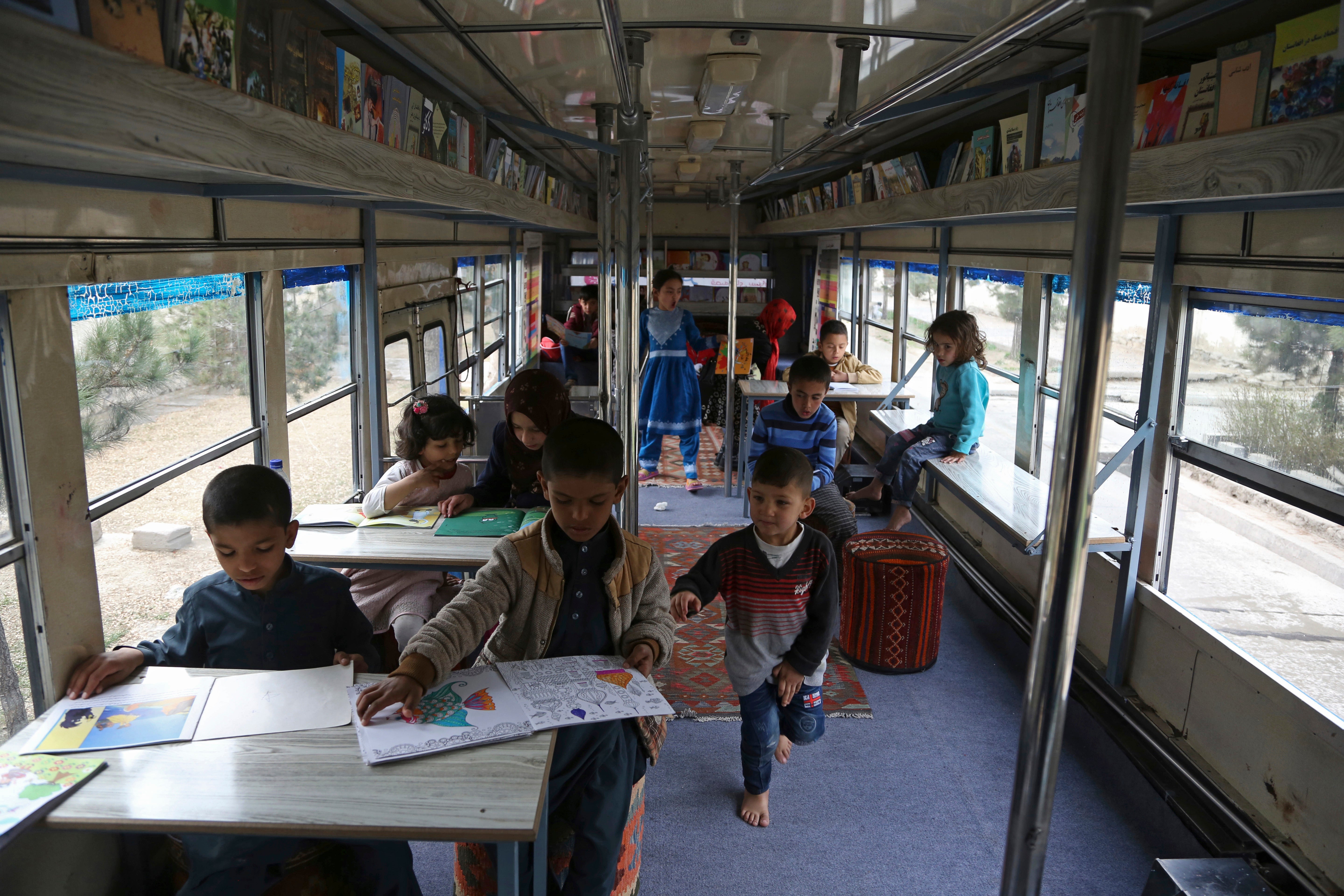 In this Saturday, March 10, 2018, photo, Afghan children read books in a library on wheels, in Kabul, Afghanistan. From sunrise to sunset, the bus drives around Kabul’s neighborhoods, stopping in each place for a couple of hours at a time. The mobile library was the initiative of 25-year-old Freshta Karim who wanted to give Kabul’s children something badly missing in her own childhood — the chance to widen one’s horizons, free of the shadow of war and poverty. Image: AP/Rahmat Gul

KABUL, Afghanistan (AP) — The children of Kabul love the blue bus — they rush toward it every time it pulls into their street, eager to come onboard, their young eyes brimming with excitement.

But it’s no ordinary bus. Its name is Charmaghz, the Dari word for “walnut”, and it’s a library on wheels — the first such enterprise in Afghanistan’s war-battered capital.

Inside the bus are rows of neatly stacked books for children, hundreds of them in both Dari and Pashto, the two main languages in Afghanistan. And small tables and stools for the kids to sit on as they discover the joys of reading.

From sunrise to sunset, the bus drives around Kabul’s neighborhoods, stopping in each place for a couple of hours at a time.

The library was the initiative of Freshta Karim, a 25-year-old who recently got her master’s degree in public policy from the University of Oxford, England. She wanted to give Kabul’s children something badly missing in her own childhood — the chance to widen one’s horizons, free of the shadow of war and poverty.

The idea came to her two years ago, Karim said, when she was hosting a small reading club for children at her home. She thought about ways to expand the project and bring reading opportunities to more children in the city.

“I don’t know how many of us can really forget the pain that the war has given us. Maybe children are too young to think about it, but I still feel that they realize it,” she said. “I hope a program like this can give them an opportunity to forget those things.”

Two weeks into the project, she is thrilled by the kids’ fondness for the bus.

“We were not expecting so much love from the people and such acceptance, I am so amazed,” she said.

Karim says few people her age remember going to libraries as kids, the war had deprived them of so much. According to Save the Children, nearly a third of all Afghan children are unable to attend school, leaving them at increased risk of child labor, recruitment by armed groups, early marriage and other forms of exploitation.

“Many schools even don’t have buildings,” Karim said. “Talking about a library is a luxury.”

On a recent day in her western Kabul neighborhood of Kart-e-Char, 11-year-old Marwa could hardly wait for the bus to turn the corner of the road so she could see it, run and jump in, and start reading.

“The first day I came on the bus, I was so happy that I didn’t want to leave and go home,” Marwa said, smiling.

She wants to know more about everything, her homeland and the world, she says.

Karim and her team believe it’s important for the children to choose the books that appeal to them freely and keep reading. It’s the best way to develop critical thinking, she says — and hopefully also a step toward combatting Afghanistan’s 62 percent illiteracy rate.

The blue bus, decorated with colorful paintings to appeal to the young ones, was provided by the transportation ministry. All the books have been donated by different organizations or individuals. The donations also pay for the fuel that keeps the wheels turning day-to-day.

University student Siyam Barakati, 21, is one of the five-member team on the bus. He is the story-teller and his job is to read to the smaller children who cannot yet read.

“It is really enjoyable for me to be with kids, for a short time I forget everything else,” he said. “It’s a good feeling.”

For 10-year-old Sameer, books are his new friends — and a source of knowledge to pass on.

“I read a book here, and learn something from it,” he said. “Then I go home and tell the story to my sisters, and I get to learn more.” CC