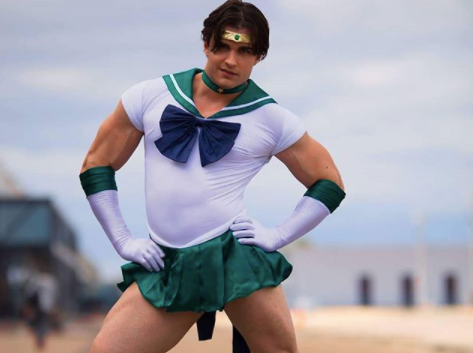 Cosplay is one way of transforming into your favorite characters; the options are limitless if you imagine hard enough.

For one French cosplayer, gender isn’t a hindrance on the characters he can embody, and no one can tell him otherwise.

International cosplayer Leobane boasts a muscular physique, so it seems fitting that he dresses up as buff characters like Disney’s Hercules and Sparta’s King Leonidas from “300.”

His commitment to cosplay has earned him a following of over 20,000 on Instagram and has allowed him to become a cosplay judge on the world stage.

Taking a break from portraying hypermasculine characters, Leobane decided to try something new: dress as Sailor Neptune from the anime “Sailor Moon.”

He put together a costume consisting of a skin-hugging white top, long gloves, a micro-mini schoolgirl skirt and heels.

Many praised his work and fierce poses, but not everyone was a fan. He wrote in one post, “I noticed that when I post a pic of this costume, each time, I’m losing some followers.”

But he remains unapologetic: “I will continue on this way because that’s mean I’m losing some closed minded people and I only need crazy badass and open-minded Spartans in my phalanx.”

He says he can’t remember why he decided to wear the costume, but now has a message behind it: Don’t let your physical appearance stop you from depicting your favorite characters.

“If you love Superman or Thor or even Hercules and are skinny AF: DO IT. If you are black or white and want to cosplay a character from the opposite skin color: DO IT,” he wrote in an Instagram post.

“Don’t limit yourself, cosplay give you the opportunity to become whatever you want to be, take this chance!”

As he has proven, confidence and creativity can go a long way. But if there is anything disappointing with his cosplay, perhaps it’s that he didn’t wear a green wig to complete his Sailor Neptune look.  /ra