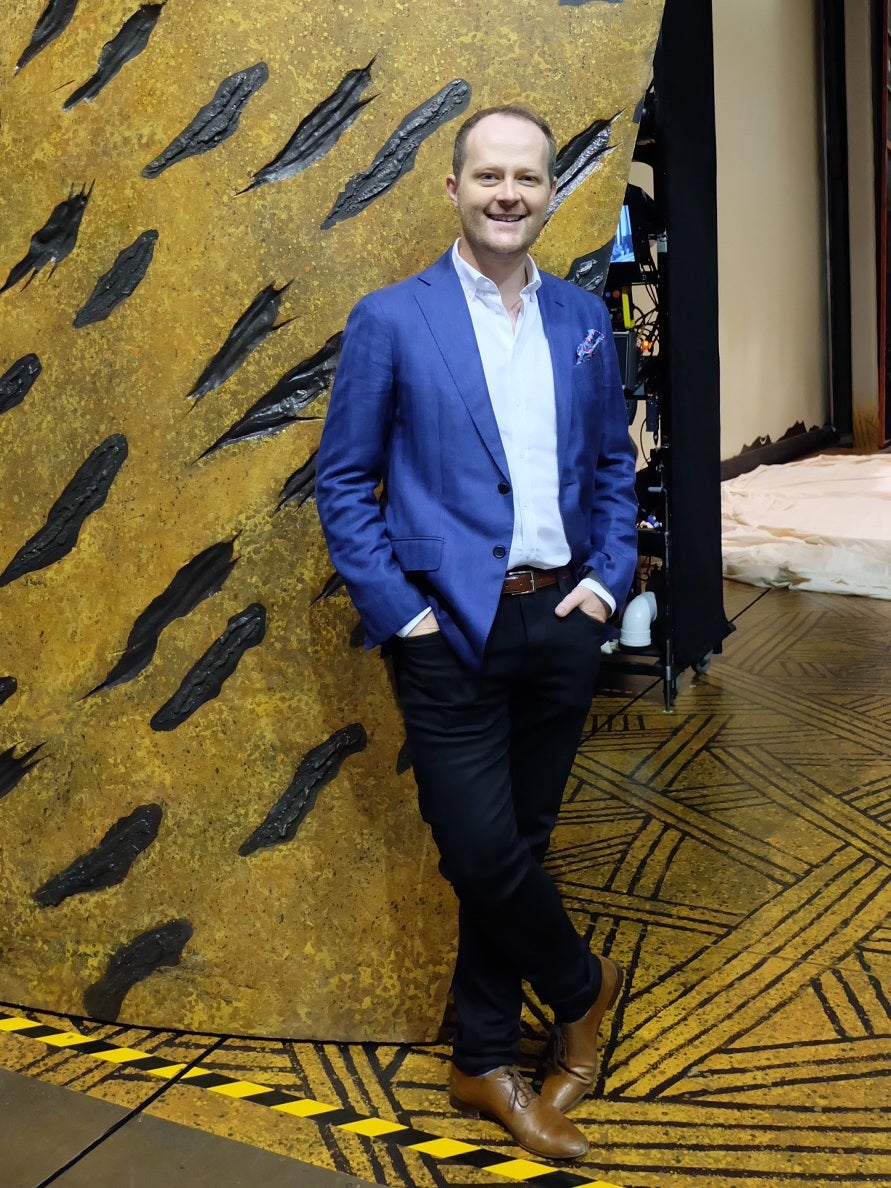 Michael Cassel: “The talent here [in PH] is second to none.” —PHOTO BY PAM PASTOR

The first time Michael Cassel watched the West End production of “The Lion King,” he was blown away.

“It was my first European trip and London was the last stop. James Thane, a very good friend, mentor and now a colleague of mine, had arranged tickets. I had goosebumps. I thought, ‘How do you do this onstage?’ At the end of the show, I went to the merchandise booth and bought everything because I wanted to soak it all up.”

He spent that night in the bathroom in his friends’ one-bedroom apartment reading the program and Julie Taymor’s “The Lion King: Pride Rock on Broadway” until 3 a.m.

The next day, he went to see the show again with his then-girlfriend and now wife, Camille.

Then he headed to an Internet café to send a message of thanks to James. “And the news popped up: James Thane was appointed managing director of Disney Theatrical in Australia. I was like, ‘What?!’ So I write James, ‘Dear James, thank you so much for changing my life. ‘The Lion King’ is the most amazing thing I’ve ever experienced. And oh my goodness, you are now running Disney and setting up Disney in Australia, I have to come and work for you.’ Two months later, I started working with Disney as James’ assistant.”

The musical theater bug bit him much earlier than that, when he was around three years old and growing up in the coastal town of Kiama in Australia. “I wanted to be a performer: “I used to put on concerts for my family. But I realized I had no talent to be onstage.”

At age 12, he watched “Jesus Christ Superstar” in Sydney. “That sort of changed my life because I realized, oh, there are other roles in theater than just being onstage. I discovered that there was the role of the producer, and, from that moment, I decided that’s what I wanted—to be involved in bringing these shows together and not have to subject my audiences to my lack of talent on stage. It’s the best solution, really.”

Michael’s dad, a builder, and his mom, a real estate agent, were very supportive. “I think it was novel (for them) and they thought, ‘Better Michael doing this than roaming the streets.’”

Even as a kid, Michael showed remarkable determination. At 15, he produced a Christmas carols show that drew 4,000 people. He recalled a gift his piano teacher gave him as a kid. “It said, ‘If you can dream it, you can do it.’ It was a quote from Walt Disney, funnily enough. That’s always been sort of my motto.”

At 12, he wrote promoter and publicist Harry M. Miller, asking to be mentored. Harry, who told Michael to finish high school first, really did become his mentor.

“My first week with him, he called me into his office. ‘Michael, did you walk through reception today?’ I said, ‘Yes.’ He said, ‘What did you notice?’ I said, ‘Nothing.’ He said, ‘Go back down to reception and see what you missed.’”

Michael went back down and told Harry he saw a busted light bulb.

“Harry said, ‘Why didn’t you fix it?’ I said, ‘Well, I didn’t notice it.’ He said, ‘If you want to be a producer, your job is to notice every little detail.’

“I always tell that story because it sums up what a producer has to do. My job is to focus on it all and to notice those details. That’s what elevates a show from great to really, really special and exceptional… I was taken under the wing of some really smart people. That’s where I learned my craft of being a producer.”

Over the years, Michael has worked on bringing phenomenal shows to different parts of the world, including “Les Miserables,” “Kinky Boots,” “Beautiful: The Carole King Musical,” “Harry Potter and the Cursed Child,” “Priscilla, Queen of the Desert,” and “Pretty Woman: The Musical,” which will open on Broadway in August.

But it’s undeniable that “The Lion King” has played a big part in his career. “It’s the first theater production I ever got to work on professionally.”

During his 10-year tenure with Disney Theatrical Group, he worked on bringing “The Lion King” to Sydney and Melbourne, then to Shanghai.

He was asked to move to New York for Disney’s international productions. His first project entailed moving to South Africa to produce the 10th anniversary of “The Lion King” there.

At Disney, Michael produced memorable productions like “Beauty and the Beast,” “Tarzan,” “Aida,” “Mary Poppins” and “The Little Mermaid,” but “The Lion King” will always be special to him.

“It’s the artistry, the incredible story, the amazing music by that great combination of Elton John and Tim Rice. That vision that Julie Taymor and Michael Curry brought to creating the show is very special and unique. I think that’s why audiences are so engaged with the show. I think that’s why 20 years on, the show still has an impact on audiences today like it did in 1997 when it opened. Audiences walk out of that theater having been incredibly moved. And I think that’s what good theater has to do.”

In 2013, after his wife had their first baby and they moved back to Australia to be close to family, Michael formed his own company, Michael Cassel Group.

“Out of the blue, I get a call from Cameron Mackintosh. He said, ‘I wanna produce ‘Les Miserables’ in Australia, will you come in and run that for me?’ What an opportunity, you know? Not only the most successful producer in the world but the most incredible show that I loved, and I thought, ‘Wow, if I was ever gonna make that jump and start my own company, this is a great launching pad.’”

It’s Michael Cassel Group and Concertus Manila, with Disney Theatrical Productions, that have brought “The Lion King” to Manila, now running at The Theatre at Solaire.

Plans to bring “The Lion King” to the Philippines began during the “Les Miserables” season in Manila in 2016. “We’ve had a great experience with ‘Les Mis’ and that for me cemented just how great this city is, how great the people are, how embracing of musical theater and how talented (they are).”

They didn’t want Manila to be just a stop on “The Lion King’s” first international tour, they decided to rehearse the show here.

“I think it was a very, very smart decision. I’m incredibly happy that that decision was made. It’s been such an amazing experience to have 18 nationalities represented in the show all come together, all call Manila home for the past three months now and create this show. The Philippines is really in the DNA of this production of ‘The Lion King’ and I think that’s incredibly special.”

“The talent here is second to none,” he added, saying in particular of the young Filipino actors playing Simba and Nala: “God, they’re so talented. They have such great spirit and they work hard.

“Mary Peterson, our costume supervisor, mentioned to me on Saturday, ‘You know, Michael, the people here are some of the very, very best I’ve ever worked with. The work is being done, I don’t need to double-check it, it’s beautiful, the artistry…’ That’s great credit. I think the community here needs to take great pride in what talent you have and what a contribution you’ve made to this show in particular.”

He’s excited to see more Filipinos come and watch the show. “It’s unlike any other experience. In terms of artistry, story, theatricality, there is nothing else like it. I think Filipinos will embrace the show, embrace the story and will have this experience for the rest of their lives.”

Disney’s “The Lion King” runs until May 6 at The Theatre at Solaire. Call 8919999; visit ticketworld.com.ph.