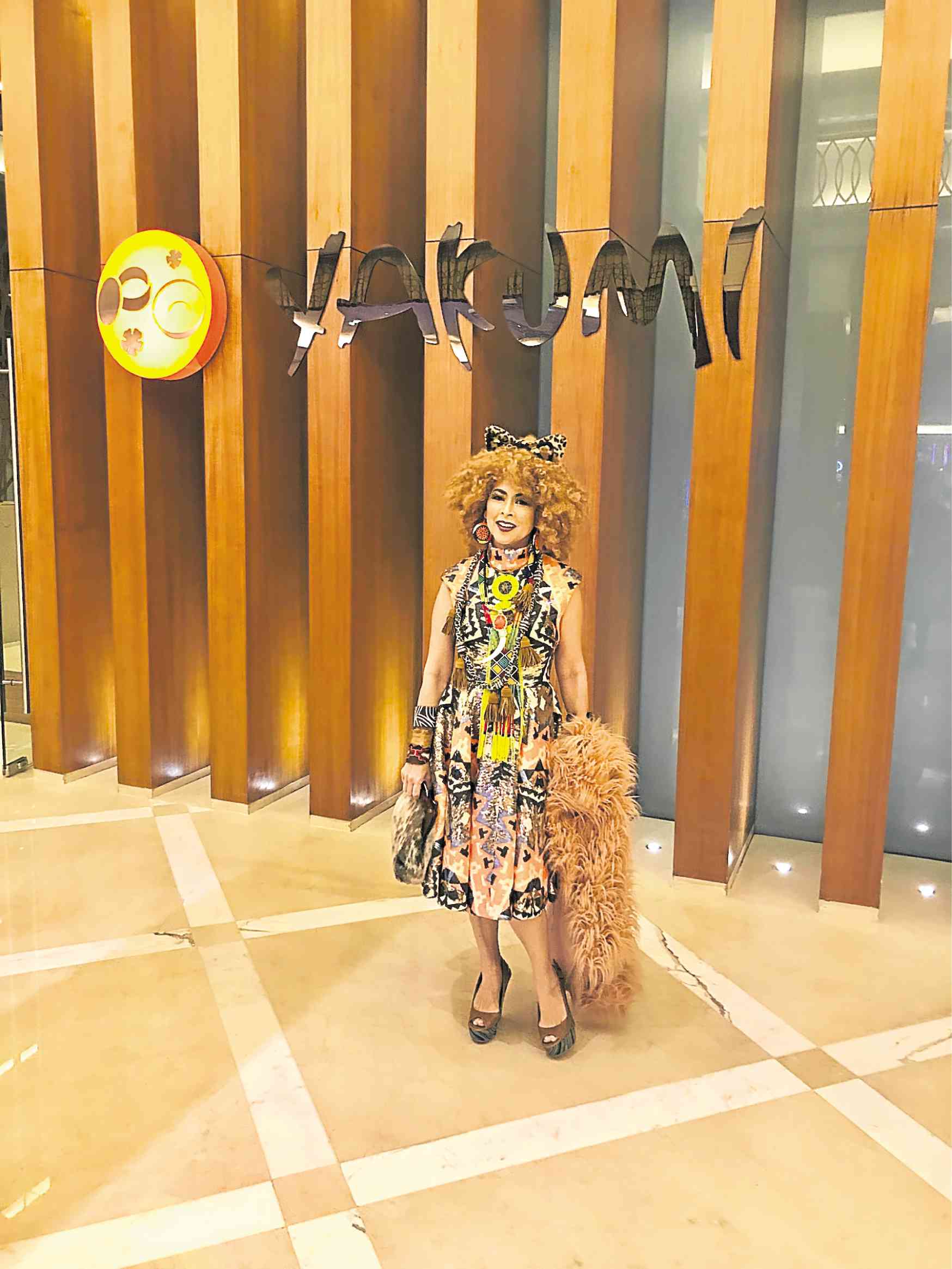 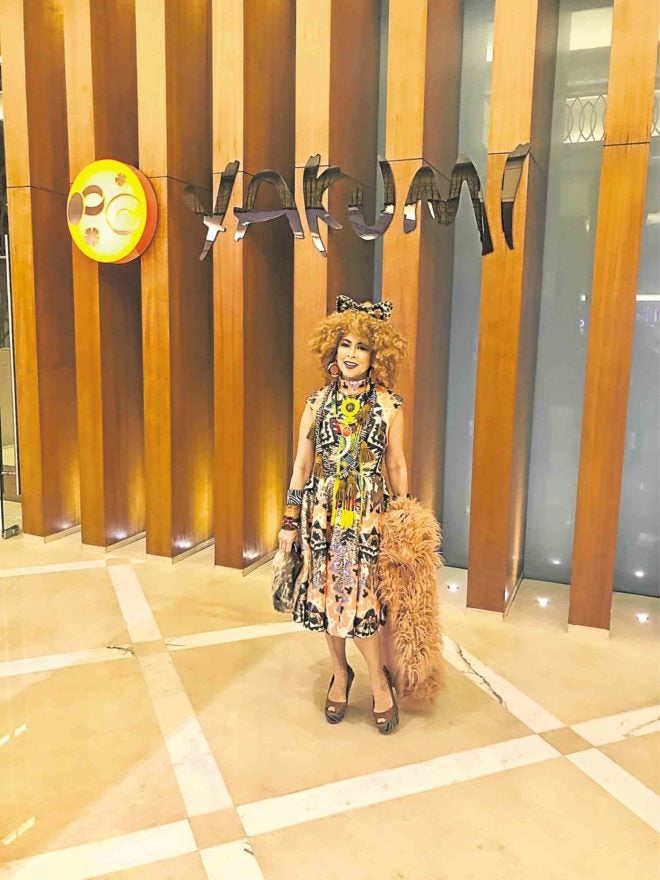 Don’t be late when watching the Manila run of “The Lion King” at Theatre at Solaire. Make sure you’re settled in your theater seat because the opening act is incredible. After over two months of rehearsals, the world’s No. 1 musical kicked off its first international tour in Manila and will run until May 6, before proceeding to Singapore, Korea and Taiwan.

It is presented by the Michael Cassel Group and Concertus Manila, in association with Disney Theatrical Productions. Co-presenting sponsors in Manila are Globe and Visa.

The principal cast includes Ntsepa Pitjeng, who is returning to play Rafiki, the same character she has portrayed in the United States, United Kingdom, Brazil and Switzerland productions.

Direct from London’s West End production is Mthokozisi Emkay Khanyile in the role of Mufasa. Also from the UK is music theater performer Antony Lawrence as Scar.

I met some of the moms of these talented performers on opening night. Before the show, my hubby and I enjoyed dinner at Yakumi restaurant in Solaire to avoid being late. This year the resort and casino is celebrating its fifth anniversary with lots of perks to its guests.

More millennial kids took the spotlight at Bench Fashion Week (BFW) S/S 2018 held at The Playground of the Bench Tower —the third BFW so far. The first day was all for the women, featuring the latest collections of local brand Kashieca, foreign brands Vero Moda and Karen Millen, and designer Vania Romoff.

The second day was a display of vibrance and youth, as the runway became the platform for brands Human and American Eagle, and the new masterpieces of last year’s Bench Design Awards winners Jennifer Contreras, RJ Santos and Jaggy Glarino.

The last day gave everyone a little bit of everything as it featured Suyen Corp’s own multibrand venture, Assembly, designer Joey Samson, and of course, Bench.

It was a star-studded three-day event—Kashieca girls Liza Soberano, Carla Abellana, Kelsey Merritt and Bea Alonzo all modeling for the brand. Stunning Lovi Poe, Paulo Avelino, Marco Gumabao were in the audience, while Gabbi Garcia, Maxine Medina, Albie Casino, LA Aguinaldo and Juliana Gomez were among the endorsers who walked for Bench.

Young millennial achievers like Nikki Allen, Amanda Zamora, Natalia Ortega and brothers PJ, Michael and Tim Laude joined the Bench endorsers who modeled the summer collection with great confidence. The Laude brothers are the nephews of super-generous Alice Eduardo who recently celebrated her birthday giving a hefty donation to the Department of Pediatrics of Philippine General Hospital (PGH).

Alice, together with her son Jameson, turned over the Pediatric Hematology-Oncology Unit, along with the PGH Medical Foundation doctors and Miss World Organization representatives.

In line with the theme of generosity and passing this virtue to their children, allow me to highlight “Belo Smiles,” a charity project of Belo Medical Group CEO and founder Dr. Vicki Belo and her daughter Cristalle Belo-Pitt.

Since 2011, Dr. Vicki has spearheaded Belo Smiles, a charity giving cosmetic procedures to help children with cleft lip and palate. Belo Medical Group has showed the power of beautiful transformations, changing the lives of children and their families.

Belo endorsers and friends from the press and social media influencers have shown their support to this cause. Angeline Quinto and Yeng Constantino sang for the kids, who also got the chance to be up close with some of their idols as the celebrities openly bonded with them.

They have partnered with Operation Smiles to reach out to more children. Belo Medical Group has helped more than 150 kids since 2011. It plans to continue the project and reach rural areas in the future with the help of Operation Smiles. Belo’s Dr. Sheila Acosta and surgeons Dr. Jun Caparas and Dr. BG Alcantara are among the volunteers.

Cristalle said that the Belo Smiles exhibit will be at various locations to help spread support for this cause. This weekend, the exhibit is at SM Mall of Asia, April 6-8 at SM Aura Premier,  April 27-29 at SM North Edsa.

Another family-owned local brand is doing its own corporate social responsibility program as it celebrates its 50th anniversary. Uratex, the country’s leading manufacturer of world-class foams and mattress, marks this milestone with Uratex Project 50.

Starting this March, also tagged as World Sleep Month, the Robert G. Cheng/Uratex Foundation is donating 50 Uratex mattresses to 50 combined public hospitals and nursing homes nationwide. Aiming to make a difference in the lives of countless patients and their families around the Philippines, Uratex Project 50 will help improve the condition of the public hospital facilities to promote better health care and services.

At the turnover in PGH, Uratex grand dame Naty Cheng and her daughters were present and grateful to share the blessings the company has received all these years.