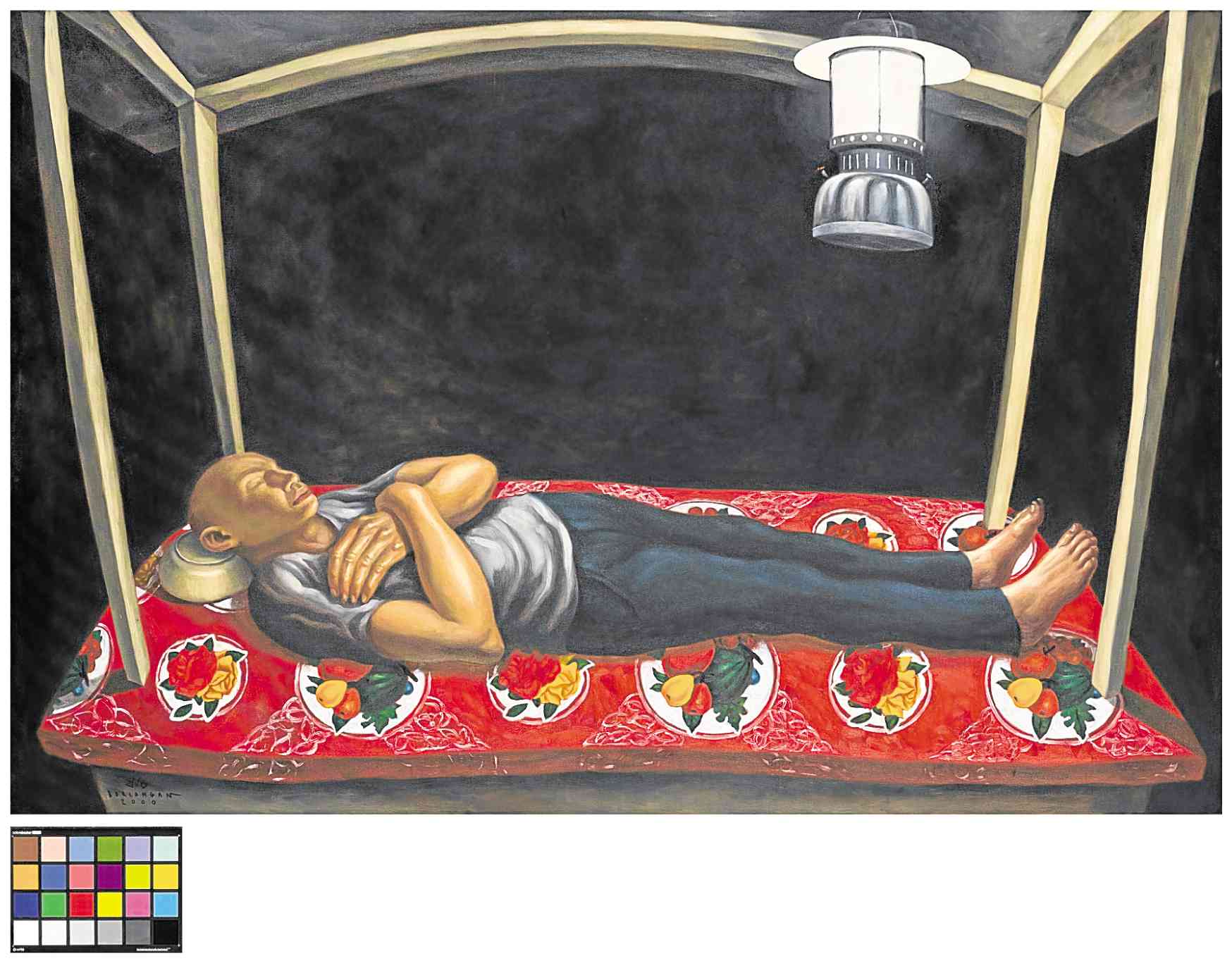 Do something different if you’re in town this week. Visit the Metropolitan Museum and catch the last three days of the Elmer Borlongan exhibit—this Monday, Tuesday (open free to the public) and Wednesday.

In this exhibit marking his 25th year in art, you’ll come face to face with the Filipino—so imperfect and ironic, so funny, so “barok,” so human, but it’s who we are, who we choose to be.

Borlongan is one artist who immerses the Filipino in his authentic environment, but without making his art look like a political manifesto. In times like these when the news (fake, fact or whatever) makes you feel like bashing your head against the wall—morning, noon and night —a tour of Borlongan art at the Met is almost cathartic. It could be your visual and mental resuscitation this Lent.  The museum could breed your moments of silence.

Last Thursday, our group of friends felt  privileged to have Borlongan himself tour us around the exhibit as we  listened to him tell the stories behind some works.

With him was his wife, Plet, also an artist of note, fresh from her acclaimed exhibit/installation at the 2018 Art Fair.

Borlongan began the tour in  the  room set up as a vignette of the Borlongans’ home in San Antonio, Zambales,  at Casa San Miguel, the well-known art and music destination put up by the Bolipatas, Plet’s family. (To a generation of music lovers, Casa San Miguel is synonymous with the famous Bolipata brothers, the cellist Chino and violinist Coke. Coke has been running Casa San Miguel. In recent years we’d see him conduct his string orchestra of young artists during state visit receptions at Malacañang Palace.)

The vignette is a cluster of the Borlongans’ furniture—the sofa, the ottomans, the coffeetable with its base of metalwork done by Joel Ajero. On one side stands a vintage cabinet containing the artist’s personal stuff, notably his cameras.

Apart from his art, Borlongan is into photography and music. He was the guitarist of a punk band in his younger days (“hardcore punk,” described Eric Caruncho in the story, “From Elmer Borlongan, portraits of the Filipino as human being”, Jan. 22, 2018), and to this day, he paints daily  to rock music.

Before he walked us through the 150 paintings, he led us to the room filled with 50 drawings, where we noted  his early watercolors. The watercolor of a woman sleeping, covered in blanket, in a room  with Japanese window screens, brought back his memory of  Baguio.

On a jaunt with a group of artists, up before sunrise, he eyed a member of the group still fast asleep, so he began to paint her, then all the other artists woke up and proceeded to do the same. He laughed recalling the impromptu drawing session, “N’ung nagising na siya, sigaw nila, huwag kang babangon!”

When told how different his early watercolors were from the Borlongan figurative expressionism that has grown immense following, he said he might explore doing watercolors again. Now that is another Borlongan to look forward to.

He brought us to his early works: the oil-on-canvas portrait drawn from his family photo, with him as the newly baptized baby  swathed in baptismal gown, titled  “Walang Kamuwang-muwang.”

Next to it was another early work, done when he was 12 and a student of Fernando Sena—an oil, a view of Jones Bridge. “He didn’t treat us like child artists,” recalled Borlongan of his revered mentor. “He made us paint as if we were in the college of fine arts, with perspective and all.”

Borlongan came under Sena’s wing when he was 11, and even then, Sena saw the boy’s talent and how serious he was in art. The mentor-student ties survive to this day, with Sena hardly able to contain his admiration of Borlongan during the opening of the Met exhibit last January so that he blurted in an interview with CNN, “He should be our next National Artist!”

This exhibit, “Elmer Borlongan: An Extraordinary Eye for the Ordinary,” which he prefers to call a survey show, instead of retrospective, is a stop-in-your-tracks narrative of the artist’s evolution. Perhaps because it was curated by historian and Inquirer columnist Ambeth Ocampo, an engaging storyteller himself, the exhibit is an engrossing story,  with Borlongan serving as our storyteller.

He walked us through his seminal works—one that won  the Metrobank Art Awards, another from his University of the Philippines (UP) days molded by the icons of the era, from Roberto Chabet, Nestor Vinluan to Keith Haring, Jean-Michel Basquiat.

He reminisced the days he and other social realists would chill in Hinulugang Taktak, Antipolo, until an art patron, Dr. Joven Cuanang, a leading neurologist, stumbled upon this ragtag assembly and invited them to paint in his Antipolo home on weekends.

The association with the doctor would be part of Philippine art history: the group would evolve into Salingpusa, now hotly pursued by collectors, and Cuanang’s home would expand into the Pinto Art Gallery and Museum, now a destination of art lovers.

“We’d literally hang our works then in Dr. Cuanang’s garden, on a clothes line, for the guests and collectors to see. So we called it Sampayan gallery,” Borlongan recalled.

Then he led us to the work that gave him affirmation of his skills.  “Nag-show kami sa Boston Gallery, then I learned that my works were bought and one of them was bought by BenCab. Tuwang tuwa ako nun,” Borlongan said.

The work is “Sundo” (oil, 1994), showing a tricycle driver and his passengers, their expressions so placid, like figures so resigned to their entrapment.

Beside it was “Gabay,” the oil-on-canvas that our group was so interested in because it figured in the love story of Borlongan and Plet.

Done in 1994, it showed a driver with his  passenger— Christ wearing his crown of thorns. Its origin wasn’t religious.

“I was on the road when I saw this car and  the man on the  passenger seat caught my eye,” Borlongan said. “It was the statue of Christ.”

The eyes of the figures evoke humor—the driver staring sideways, even suspiciously, at his crowned passenger, and the sainted passenger has his glance heavenward, as if in supplication.

Plet recalled the first time she saw that work on exhibit—I want to meet that artist someday, she told herself.

She did—sometime later. In the ’90s, Borlongan gave regular art workshops, especially to neighborhood kids, and Coke Bolipata wanted him to do one at Casa San Miguel. Plet, who was then based in New York, was home on vacation, and was tasked by her brother to pick up Borlongan in Manila, from where they would take the bus all the way to Zambales.

Now that was a very long ride for the two strangers, during which Plet brandished  her notebook of artwork before Borlongan, the proud and smug New Yorker she was.

In Zambales, Plet had to leave right away because she was due to fly back to NY—but not before Borlongan could show her his works, his turn now.

“And the first page he showed me had that work, ‘Gabay,’” Plet let out a guffaw at the recollection. “Oh no, I told him, forget what I showed you. I was so embarrassed.”

The two artists wouldn’t meet again until two years later, but even way before their second meeting, Borlongan knew she was the one. Borlongan was then an artist-in-residence at Casa San Miguel, and Coke—did this erstwhile child prodigy know he made a good matchmarker?— asked them to paint an interaction. From two kindred spirits in art, the two became  soulmates. Plet didn’t go back to NY.

“I said it out to the universe,” Plet described the moment she voiced out her wish to meet the artist who painted “Gabay.”

They have been married for 20 years now, and they call each other “mate,” short for soulmates. One afternoon with them and we knew that theirs is a solid, fun union—and romantic.

Alya Honasan, who knows both, noted how their friends observed how Borlongan’s “palette lightened up and became a bit colorful when they fell in love.”

In time, Borlongan’s bald characters grow on you.  More accurately, they speak to you, the viewer. Subconsciously shaped in his mind by the ward of the National Mental Hospital whom Borlongan grew up seeing in the family’s neighborhood in Mandaluyong, the baldies aren’t grotesque—rather, they’re regular once you realize you come across them in your everyday routine, including that light bulb changer, although yours doesn’t really hold the bulb with his mouth, and the Borlongans’ did. The light bulb changer is one of the works on exhibit.

Plet recalled how she and Borlongan couldn’t believe how their  handyman,  changing their light bulb, held the extra bulb in his mouth, instead of handing it to them. The sight so struck Borlongan that he painted it.

His “Santo Entierro: Lugawan ni San Pedro” (oil on canvas, 2000) is a unique, to say the least, depiction of the Dead Christ.  In fact, it’s the porridge vendor

Borlongan spotted on the street who would sleep right where he peddled his lugaw and used the kaldero (pot) for a pillow, in repose on the typical  plastic florid table cloth—the precise image of the Filipino today: a survivor who accepts his fate.