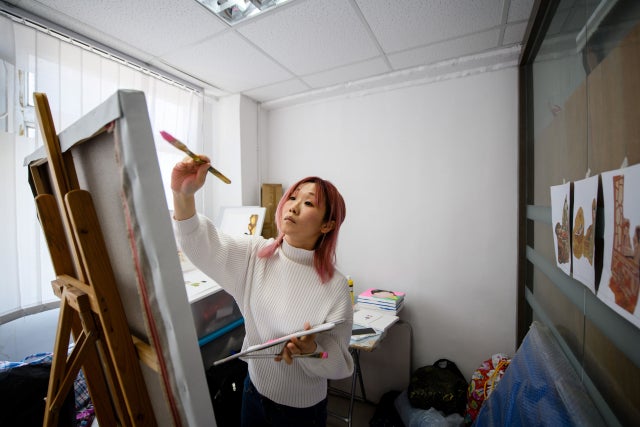 Mural artist Jackie Chung, 36, who works under the name "Pinkhead," paints during an interview with AFP. Image: AFP/Anthony Wallace

As international galleries and wealthy collectors descend on Hong Kong for Art Basel, life for some of the city’s creatives is still a struggle to make ends meet.

Art Basel’s Hong Kong edition launched five years ago and spawned a host of simultaneous shows in what has become known as “Art Month”.

But the glamorous artistic whirl associated with March in Hong Kong feels like a world away for some artists battling sky-high rents and lack of space.

Hong Kong mural painter Jackie Chung works out of a small unit in the working-class neighborhood of San Po Kong, away from the hustle of downtown.

The 250-square-feet (23-sqm) studio is one of 25 subdivided flats in an industrial building. Such cramped partitioned spaces are commonly lived in by residents who cannot afford spiraling accommodation costs.

Chung, 36, and oil painter Ray Chow, 31, pay HK$8,000 (US$1,020) per month to use the unit as a studio and have promised the landlord not to get paint on the floors and walls. Both live with their families to save on outgoings.

“It’s not ideal. After we moved in with our artwork and tools, it was almost full,” said Chung, who paints under the name “Pinkhead” after the color of her hair.

The bright unit is neatly stacked with oil paints, easels, books and paintings.

Chung has been commissioned to create giant murals around the city, including a 22-storey-high elephant, but although her works are large-scale, she practices in miniature.

“The studio is tiny and the ceiling is low. I can only paint on a medium size canvas,” she told AFP.

Chung has a day job as a graphic designer, painting every evening and on weekends. She earns around HK$5,000 for a 40-square-feet mural.

Fellow artist Chow relies on freelance work including graphic design, teaching and painting commissions to pay his way — creating an oil painting takes him up to three months and he sells one or two each year for around HK$10,000 each.

“Sometimes it makes you feel so frustrated to be an artist in Hong Kong. You need to do a lot more other things to sustain your passion,” he said.

Artists must be represented by a gallery to participate in Art Basel, which runs for five days at Hong Kong’s harbor-front convention center.

The line-up this year includes galleries from Iran to Istanbul and some from Hong Kong with local artists on their books.

Ink artist Hung Fai, 30, was born and bred in the city and has exhibited at Art Basel four times under Grotto Fine Art gallery, which aims to nurture emerging Hong Kong talent.

He believes the fair is a good opportunity to meet other artists, curators and collectors, with tens of thousands of visitors each year.

But Hung hopes that in the long term, Art Basel will work more closely with local art institutions or even the public sector to build a broader creative culture in the city.

“If we can transform the short-term interest of an art fair into a long-term habit of appreciation of the arts, then there can be positive changes on the local art scene,” he told AFP.

“Our support for the Hong Kong local scene is clearly 100 percent there, but it is also the fact that we are an international art fair. So it’s about trying to find the balance between these two points,” Ooi said.

There are plenty of galleries and exhibitions in Hong Kong year-round, but some feel the emphasis is commercial rather than aimed at a wider public and that there is a disconnect with grassroots artists.

Mural artist Chung has worked at Art Basel as a volunteer and says she felt it was too driven by sales and visitor numbers.

“I don’t think Art Basel is that close to local artists. It seems to help local tourism more than the local art scene,” she said.

Chow admits he sometimes fantasises about selling a painting for tens or hundreds of thousands of dollars.

But he says passion is the overriding motivation.

“I make art because I like it,” he says.

“Whether it makes me successful or not, it doesn’t matter.” CC