From Art Fair, auctions to Art in the Park: Why these are interesting times for artists | Inquirer Lifestyle ❮ ❯ 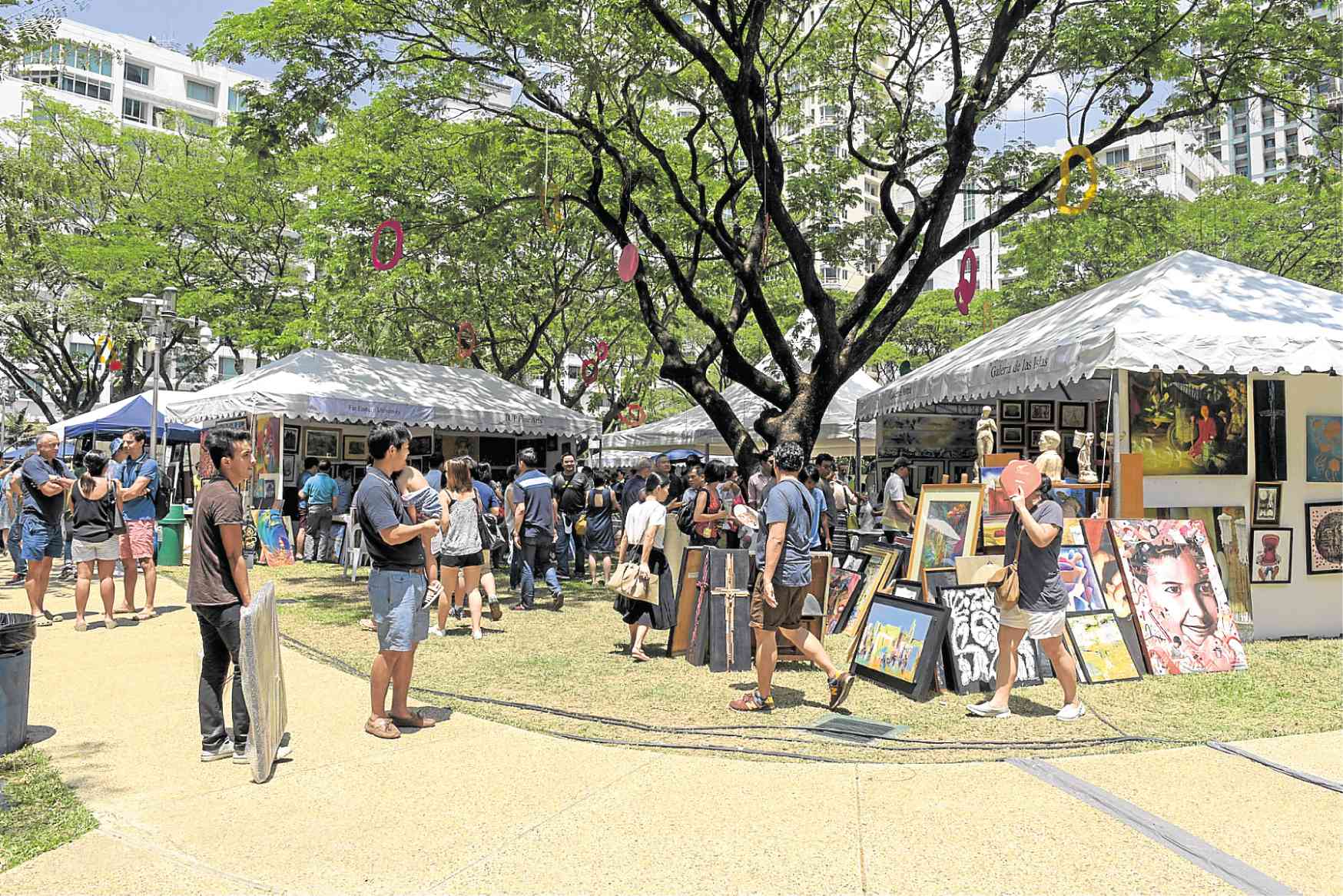 Art in the Park draws a wide range of art pieces and people.

From Art Fair, auctions to Art in the Park: Why these are interesting times for artists

It’s quite possible that the public infatuation with contemporary Filipino art—so evident last year in the feeding frenzy that attended art auctions, record attendance at Art Fair Philippines, and the hectic gallery scene—may have moved on to the next level as a full-blown love affair.

Cynical observers, taking note of the stupid prices being paid for meh artists by collectors with more cash than taste, predicted that a market correction was inevitable.

They’re still waiting, judging from last month’s record price of P112 million for a painting by modern master Jose Joya sold by an auction house, and the fact that somebody bought Richard Gomez’s painting of a big yellow penis at last month’s Art Fair. (An homage to Warhol’s cover design for the first Velvet Underground album? A Tantric representation of the universal creative principle? Or, more radically, just a big yellow dick? As the William Hurt character said in “The Big Chill”: “Sometimes you just have to let art flow over you.”)

There are signs that the local art scene is unfolding as it should, evolving organically into a normal feature of daily life, not just as a rarefied pleasure for what used to be called the “intelligentsia,” but as an accessible life-enhancing experience for ordinary, mildly educated folk.

This is thanks in large part to the internet and social media, but also to the emergence of an ecosystem that allows local artists to survive and perhaps even thrive: a network of galleries, museums, auction houses, art fairs and other events, allied professionals such as curators and critics, writers and bloggers, government institutions, art patrons and collectors with deep pockets.

“People have idealistic notions about art and what it’s for, but in the end, an artist’s career partly depends on finding a good gallery that can help them progress,” says Lisa Periquet, one of the organizers of Art Fair Philippines.

“You can call it commodification or commercialism, but how else can an artist make his art sustainable?”

Art fairs have become huge buying and selling events, which she says is a global trend. Some artists are ambivalent about the overtly marketplace-like atmosphere of art fairs.
The same attitudes toward commodification seem to be at the root of these artists’ disdain for so-called “auction stars,” such as Ronald Ventura and Jigger Cruz (who now has to endure being labelled “the next Ronald Ventura”), artists who routinely sell out their shows and fetch the highest prices.

In contrast, millennial and post-millennial artists, suckled on social media and unburdened by ideology, tend to be less uptight about careerism in contemporary art and more at home within the current ecosystem.

“People want the Art Fair to be all things to everybody, because it has been successful and it’s opened people’s eyes,” Periquet says. “They think we should be like a museum and put up highly curated shows, or like a biennale. But there’s a limit to what we can do, and our focus has always been on widening the audience and allowing all kinds of people to appreciate art. Where the art scene goes from there, it’s not up to us.”

For their part, most galleries have welcomed the art fair as their biggest selling opportunity for the year, she adds.
Despite higher rentals this year—not cheap, P200,000 and up for a booth, depending on the size—many galleries reported brisk sales, some of them selling out on day one, even with the lower attendance this year.

Attendance at Art Fair Philippines this year was pegged by the organizers at 35,000, down from last year’s record of 40,000, but that may not be a bad thing.

“We found out that more is not necessarily better,” says Periquet, referring to last year’s capacity crowd that led to long lines and safety concerns.

With an additional floor, and an extra day for collectors, there was more breathing room for visitors and a more leisurely pace.

“We tried to optimize the viewing experience so the works can be experienced properly,” she added. “People are not just grabbing selfies.”

The higher ticket prices this year may have also weeded out some of the idly curious in favor of more serious art aficionados, which is really the fair’s target audience.

The big surprise this year was photography, never a big seller in years past.

For the first time—perhaps because photographers were spotlighted in a section of their own at the fair—photographers such as Neal Oshima, Paco Guerrero and Veejay Villafranca racked up significant sales.

One of the biggest crowd draws was “Everyday Impunity,” which featured Carlo Gabuco’s photographs from the frontlines of the drug war, and an artifact from an extrajudicial killing.

Some observers noted that audiences seemed to be interested in art that addressed contemporary social realities, linking the popularity of gritty photo-documentary with a
mini-revival of social realism, an art movement which hit its peak in the early 1990s and seems poised to make a comeback.

Perhaps the more significant trend is how artists have used the art fair as a platform to present themselves and their work, not just to the local audience, but potentially to the world.

There were 15 international galleries participating in this year’s fair. Their primary focus is, of course, to sell the works of the artists they have brought, giving local collectors a chance to acquire works by international art stars like Yayoi Kusama and Yves Klein, and emerging regional artists such as Indonesia’s Yunizar.
But most of them also have an eye out for local talent they can market in their home countries.

Next up: Art in the Park

Next up is Art in the Park, the fair’s older, more affordable sister event, set for April 15 at the Jaime Velasquez Park in Salcedo Village, Makati City.

Now on its 12th year, Art in the Park was conceived as a way to raise funds for the Museum Foundation of the Philippines (MFPI), still the event’s main beneficiary.
With a price cap of P50,000 on art works sold, the event has attracted participation not just from established galleries, but also from art collectives, independent art spaces, and art schools. Where the art fair tends to feature more established artists, Art in the Park is an opportunity for younger, emerging artists.

Comparing notes, two of the participating artists in Art in the Park—Ferdinand Doctolero who started in 1985 and Jacob Lindo who was born in the same year—noted how much easier it is now for younger artists to launch careers in art today as compared with just a decade ago.

Lindo, who will show his collages as a featured artist in Art in the Park, said he jumped right into the visual arts after finishing his advertising studies. Instead of looking for a day job, he worked as assistant to Louie Cordero, before going on his own two years ago. Now, he says, he is able to support himself with his art.

In contrast, Doctolero noted that his generation had to wait much longer—decades, in fact—before they were established enough to be able to leave their day jobs to focus on their art.

Both agreed, however, that these are interesting times to be a Filipino artist.