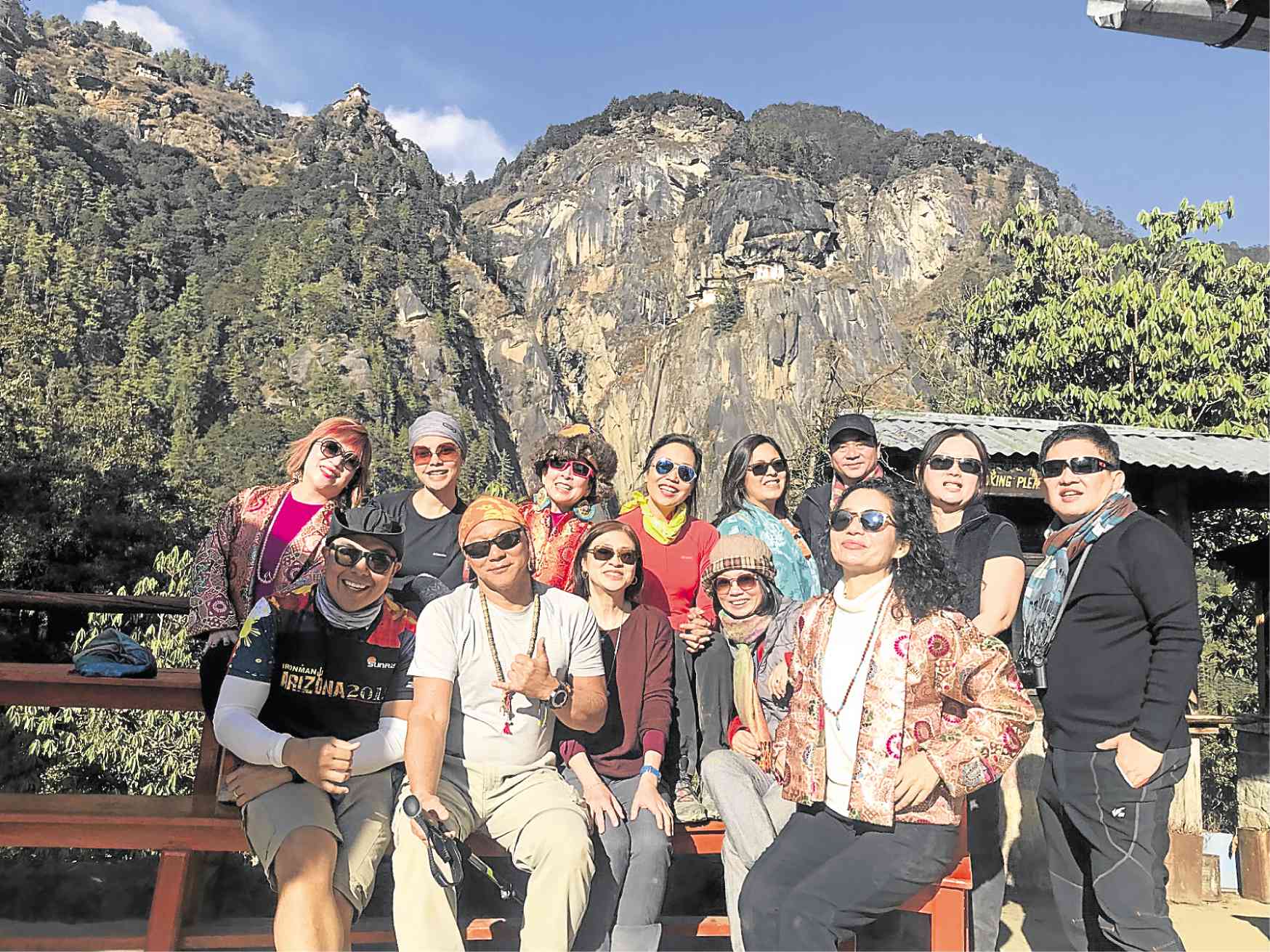 It’s never too late to live a more fulfilled and happy life. Finding the true essence of life is always a challenge. Taking time to clear unwanted clutter and embrace the positive life force may hold the secret to lifelong happiness. Because Bhutan.

Surrounded by euphoric views of mountains, Bhutan may be the most ideal place to recharge and refocus on the meaning of life, or simply experience happiness in its purest form. It is the first and only country in the world to have a government edict that Gross National Happiness is more important than Gross Domestic Product. It is also the only carbon-negative country in the world.

Bhutan has been on my bucket list for the past several years. Photographer Patrick Uy annually invites me to form a traveling group to trek in this little kingdom in the eastern Himalayas. Fortunately, this year, a group was serendipitously formed with last-minute confirmations that led to a perfect mix of adventure seekers, shoppers, healers, yogis, foodies and costume bugs.

Starting the day with self-care through yoga, my cousin Karla Delgado and Kundalini Yoga teacher Rosan Cruz gladly shared their energies in outdoor sessions. Karla led a meditation for compassion in a circle of gratitude. We cleared negative energy from our auric bodies and welcomed energies of Mother Earth, illumination, physical strength, abundance and creativity.

Whenever the opportunity for shopping arose, the avid shoppers in the group bought Bhutanese arts and crafts, Thangka paintings, and national costumes called kira for women and gho for men. Somehow, my shopping partner Vina Francisco and I found the most opportunities to scour the stores.

Each day was packed with activities, especially visiting small towns and beautiful temples. We flew to Paro, Bhutan, on Druk Air, its national airline. My seat on the left side of the plane gave me spectacular views of the eastern Himalayas, including the Bhutanese peaks, Chomolhari, Jichu Drake and Tsering Kang.

At Paro, we met our guide, Namgay Dorji, who took us to view a local archery tournament. Apparently, archery is no ordinary sport for the Bhutanese. It is a true skill, and the feats we witnessed were remarkable for their accuracy.

From Paro, we drove to Thimpu, where we stayed for the evening at the Druk Hotel, the first boutique hotel in Bhutan. Here, our tour included a visit to the Bhutan General Post Office, where we ordered stamps with our pictures on them. I made sure to send a postcard to my daughter Athena using one of my stamps. That might just be the most unique postcard she’s ever received.

From there we drove to Dochu La, where I found out that “La” means a pass, in this case, at an elevation of 10,000 feet, higher than any mountain in the Philippines. Naturally, this had me thinking of Shangri-la and what that means. The Dochu La is marked by hundreds of colorful, fluttering prayer flags, an awesome sight.

From Dochu, we proceeded to Punakha, the winter seat of the highest lama in Bhutan until the 1950s. We stayed at the Paro Zhiwaling Hotel, the first five-star, Bhutanese-owned hotel. Our first tour stop was the Punakha Dzong, a 17th-century monastery that looked like a fortress. Or perhaps it was the other way around. In any case, the Dzong was spectacularly situated at the confluence of the Mo and Pho Rivers, where we witnessed a classic Bhutanese festival.

The Punakha Festival was fantastic. The finale was a Black Hat Dance with monks and townsfolk performing rituals and colorful ceremonial dances replete with swirling costumes and elaborate headpieces. Everyone was wearing traditional Bhutanese costumes, truly a fashion spectacle!

Nearby was a 15th-century temple called Chimi Lhakhang, built by Lama Drukpa Kunley. Legend has it that Lama Kunley subdued the demoness of the Dochu La with his “Magic Thunderbolt of Wisdom.”

A wood effigy of the lama’s thunderbolt is preserved in the Lhakhang, and childless women go to the temple to receive a wang, or blessing, from the saint.

One of the highlights of our trip was a visit to Taktsang Monastery, which means “tiger’s nest.” This monastery is arguably one of the most breathtaking images of Bhutan, perched on a cliff 2,700 feet above the Paro Valley.

It was also here that our guide Nam proved his worth—acting as money changer, shopping haggler, food guide and, most importantly, my personal Sherpa. During the climb up Tiger’s Nest, Nam carried all our costumes and extra outfits!

The trek was quite a hike. We started with a mule ride through the narrow trails, and then a steep, 1.5-hour hike to a teahouse, where we enjoyed our first view of Taktsang while having tea and cookies.

From there, we were given the option to continue hiking for another 30 minutes to an even closer viewpoint, or to head back. I’ll leave you guys to guess which option I chose.

There are five monasteries in the Paro Valley area, and one of the prettiest is Dzongdrakha, a small retreat center dating back to the 16th century, when it was built by the first local king, Chogay Dragpa.

There is also a large stupa or shrine nearby, similar to that of Bodhnath in Kathmandu, Nepal. We made sure to make a lot of wishes while spinning the prayer wheels. We will always have a happy channel in our heart from Bhutan.

Festivals in Bhutan are almost year-round and they are the highlights of any planned visit. Best times are in February and March, with the festivals around the capital, Thimpu and Paro. There are also good festivals in September and October. 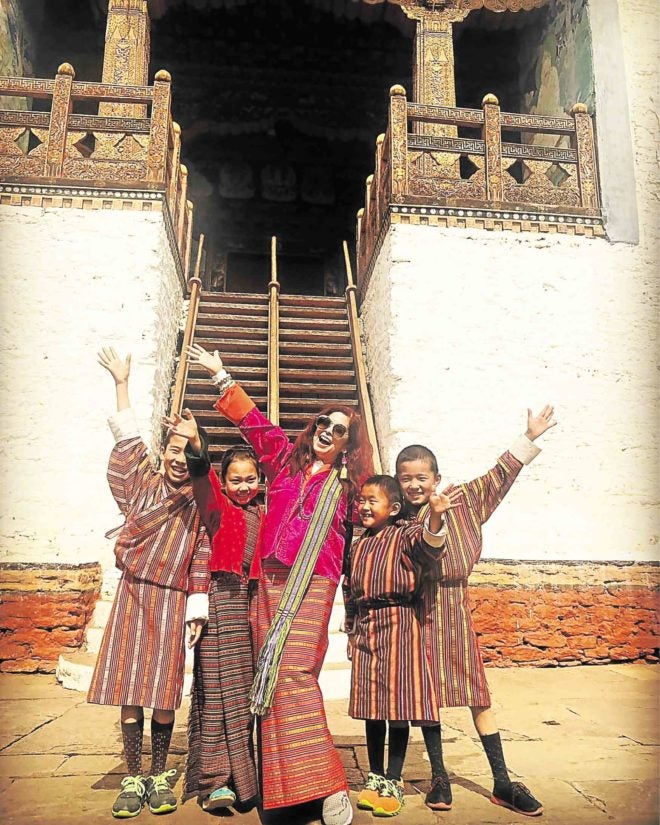