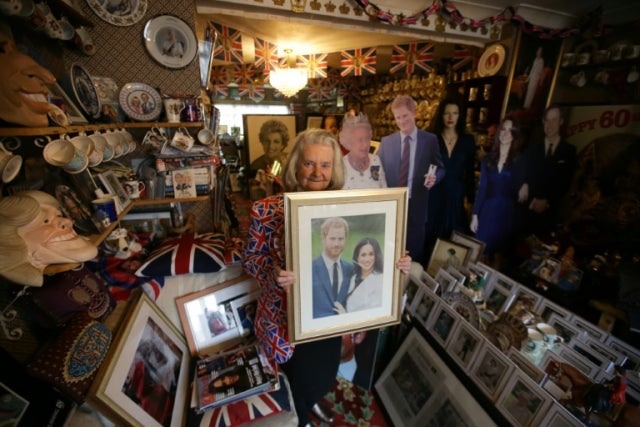 Festooned with bunting and guarded by a stained-glass sentry, the eccentric London home of retired charity worker Margaret Tyler is already bursting with souvenirs, but it is getting fuller by the day ahead of a busy summer for royal fans.

But with Prince Harry’s wedding to former US actress Meghan Markle and another baby for Prince William and his wife Kate on the horizon, Tyler is having to find more space for the glut of new merchandise, including plates, tea-towels and cups.

The so-called “Heritage House” also doubles as a B&B for royal enthusiasts looking for a quirky place to stay, with some even mistaking it for a museum.

“A lady knocked on my door the other day and said ‘what time do you open?’.”

Tyler, who used to work for a Down Syndrome charity, began collecting after giving birth to her four children.

“That’s when I started collecting stuff and the room downstairs was called the ‘Royal Room’ and everything royal went in there,” recalled Tyler, dressed in a Union Jack blazer.

“The children were not allowed in there, but they were not that interested really. Now all the children have left home, I’ve got more room. I’ve filled it up.”

Her collection has become so vast that her children have banned her from using the Internet, with a whole new treasure trove available online.

With every surface already packed full of merchandise, taking care of the collection has now become a full-time occupation.

“It’s a labor of love,” she said, sitting on a red, white and blue bedspread in the “Royal Bedroom”. “If anyone moves a cup, I know it’s been moved”.

Unsurprisingly, her family knows what gifts to buy.

“I don’t get ordinary presents at all, which I don’t really want,” she said.

Tyler even had a “Diana Room” built, a shrine to Harry and William’s mother Princess Diana, who died in a Paris car crash in 1997.

On one wall hangs an oil painting of Diana and her two children, which Tyler calls the pride of her collection.

‘We are the audience’

The royalist plans to set up camp outside the central London hospital where Kate is due to give birth to her third child later this month.

“I don’t have holidays, I don’t smoke, I don’t drink, I don’t drive a car. I just concentrate on the royal family,” she explained.

William’s cousin Zara is also due to give birth over the summer, while another cousin Eugenie is to marry in October.

Tyler hopes to be invited into the grounds of the church in nearby Windsor for Harry and Meghan’s wedding on May 19.

“I won’t know till the end of April,” she explained. “I’ll still get there if I need to swim!”

Tyler believes that Markle will be a “great asset to the royal family.”

“Kate is the typical English rose,” she added. “Meghan is more into helping people, and is a great Diana fan.”

“Harry is obviously besotted with her.”

Her experience as an actress could also stand her in good stead, she said.

“If you look at the royal family, they are the main players in a show, in a spectacle. They’ve got the clothes to go with it and we are the audience.”

Tyler still holds out that she may one day get a private performance.

“I’d love one of the royal family to come,” she said. “I’d love to have tea with the Queen, but it would have to be bone china cups.” NVG