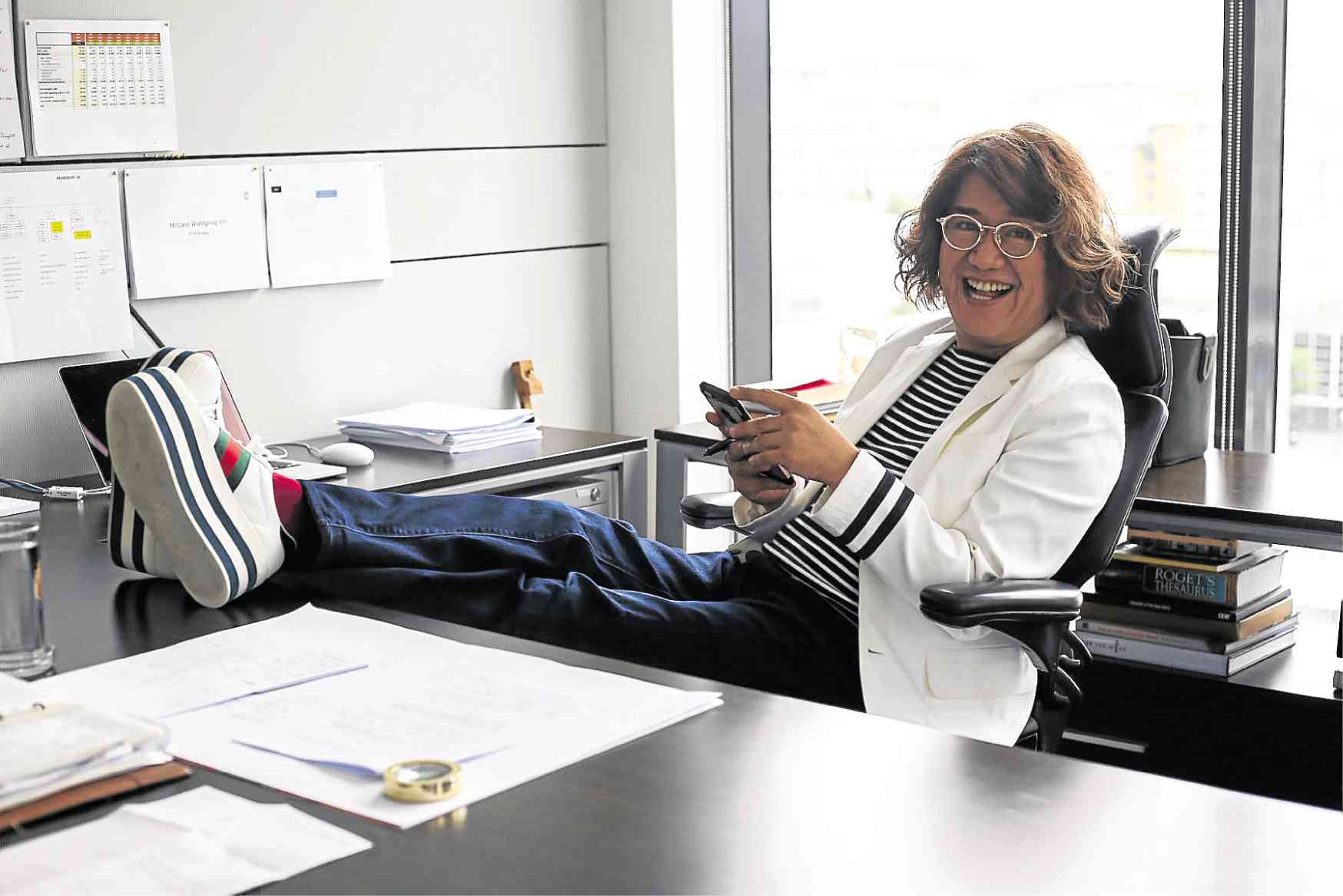 Raul Castro, ‘disruptor in chief’: ‘Truth is your best bet’

There’s a dark side to the digital world we inhabit: there are forces out there trying to manipulate what we think, and what we do.

But it’s not as bad as all that, suggests advertising executive Raul Castro.

“There will always be an environment of falsehoods, but the truth will always come out,” he says.

This might sound strangely optimistic, coming from someone who could be accused of the same kind of manipulation just to sell brands.

But as chair and CEO of McCann Worldgroup Philippines, one of the largest advertising agencies in the country, he can back up his claim with hard-won experience.

“The last time I did my research, there were 4.6 billion pieces of content being uploaded on the internet every day,” he says .

“As more and more content is uploaded, the quest for what is true becomes harder and harder. But you always have to aim for the truth because it’s your best bet. Even with all the lying and manipulating, the truth will come out anyway and the backlash will only be bigger if you’re not truthful.

“If you can, you should create an additive role to society with your communication. If it enhances life, the chances that it will resonate positively go up. If your agenda is selfish, there’s a chance it will not be noticed.”

This is nothing new, he adds. The idea of good advertising as “a truth well told” was already a McCann adage in 1912.

Castro’s contribution to the formula is figuring out how to make it work in today’s rapidly evolving Philippine market.

A case in point is the award-winning “Kuwentong Jollibee” digital advertising campaign that the McCann creative team crafted last year.

“A lot of practitioners told us: that’s not going to work,” Castro recalls.

“It broke all the rules of what people thought would go viral.”

For one thing, in a medium where attention span is measured in seconds, the short films were three and a half minutes long. In digital advertising terms, that’s like “Gone with the Wind.”
‘Hugot’

And they were downbeat, with underlying themes of unfulfilled love, aging and death: the good guy doesn’t get the girl, the pretty young people eventually grow old, the father dies, leaving mother and son.

But Castro felt they would resonate with the audience, because they rang true.

“What motivated Kuwentong Jollibee was the truth that most great loves don’t work out, and more people will identify with the ones that don’t work out,” he says.

“I think it took bravery and a clear understanding of humanity to put it out there. Much credit goes to the client for accepting what initially looked wrong and uncomfortable, and giving it the chance to prove itself right.”

McCann has since tweaked the formula for this year’s Kuwentong Jollibee series, also launched on Valentine’s Day.

Nobody dies this time around. The emotion has been dialed back a bit, and the shorts are more conventionally upbeat.

They are still generating significant social media buzz, and setting the bar for digital advertising.

Last March, Castro was inducted into the Hall of Fame of the Creative Guild of the Philippines, the highest accolade that can be paid an adman by a jury of his peers. This was on top of receiving the Lifetime Achievement Award from the same body five years ago.

This is no mean feat in a business that runs on creativity and is constantly in flux.

“What was the last ad you saw that you liked?” he asks.

“With the sheer number, you can’t remember. Advertising is changing, it’s different from what we knew it to be. Today, anybody can be an advertising practitioner—you don’t need a company. There is more advertising now than ever before, and it’s not just the advertising that we know. A Tweet is an ad. An Instagram post is an ad. A Facebook ‘like’ is an ad. A ‘share’ is an ad.

“In this scenario, which of these will work? Which will connect with the consumer? All these things—social media, technology—are not infallible. They can lead a horse to water, but it’s not a guarantee that the horse will drink. It still goes to a clear understanding of the motivations that drive the horse.
Digital bandwagon

“Five or six years ago, everybody jumped on the digital bandwagon,” he adds. “Everyone was fascinated with the shiny new toy. I’ve always believed that instead of betting on the new toy, you should go back to fundamentals. Technology keeps on changing, but you should bet on what hasn’t changed, and that’s humanity: love, heartbreak, the joy of accomplishment, the desire to be attractive, the desire to push our agendas.”

A graduate of the Broadcast Communications program of the University of the Philippines, Castro began his career as a copywriter in an advertising agency in 1986, just after the Edsa revolt.

“There weren’t that many options available when I started, so when you found a job, your only option was to be very good at it,” he says.

He scored his first big success in the 1990s with the now-classic “Lumen” TV ad campaign that took Surf laundry soap from bottom-shelf to top-tier, and turned the local advertising world on its head.

Castro’s creative team conceptualized the campaign after a deep dive into the attitudes and preferences of housewives who were the primary target audience.
They created the characters of Lumen, the sensible (but hot) housewife, her faithful husband Lando, and his skeptical mother Obang. The commercials were designed to run like teleserye episodes, with Lumen getting pregnant and eventually having twins as the story progressed.

“By the third commercial, the brand had risen to No. 1, and it had shaken up the marketplace,” he recalls.

Lumen went viral, before viral was even a thing. People talked about her on the bus, priests referred to her in their sermons, and workers adjusted the schedule of their Labor Day rally because Lumen was going to give birth on the same day.

Jan Isaac, the model for the Lumen character, became an instant celebrity. Politicians running for election vied for an endorsement from her.

“That’s when I felt that you really have to be a responsible user of the mass media,” Castro recalls. “Advertising could change minds, affect the culture, contribute to society.”
Accountabilities
In 2007, he joined McCann and was eventually promoted to chair and CEO.

One is by applying the same creativity he puts into his ads into running the agency. Castro clearly sees part of his job as being disruptor-in-chief.

“I don’t look like a CEO,” says the adman, who is known in the office for his adventurous fashion sense, and for talking the most and singing the loudest.

Sixty percent of the work force of the agency is below 30, and more than half is female, but Castro takes pains not to pull rank or seniority.

“I hate being called ‘RMC’ or ‘Sir Raul.’ The minute you have formalities like that, you begin to have set ways of interaction. I’m very conscious with the leadership team, that we don’t become the untouchables. The office should be a place where great ideas come to visit, and great ideas only come if it’s a comfortable place to grow. The less stress, the less seriousness you put into it, the better. Then people can really be themselves.”

At work, he likes to mix things up. He purposely made the office canteen small so employees who didn’t work together would be forced to share tables. If he could, he would prefer fewer new hires from Ateneo and La Salle, and more from, say, Catbalogan or Iloilo, so they would bring something new.
He tells employees to get off the internet (momentarily, at least) and find out what’s happening on the street—and not Bonifacio High Street either, but maybe Morayta or somewhere in the U-belt.

“The most dangerous thing for us is to get comfortable and think that our truth is everyone’s truth,” he says. “Even for me, to not be comfortable is very important. The minute you get comfortable—one, it’s boring and two, you become stale. You need to see new things.

“What you cannot do without is a genuine curiosity about mankind.”