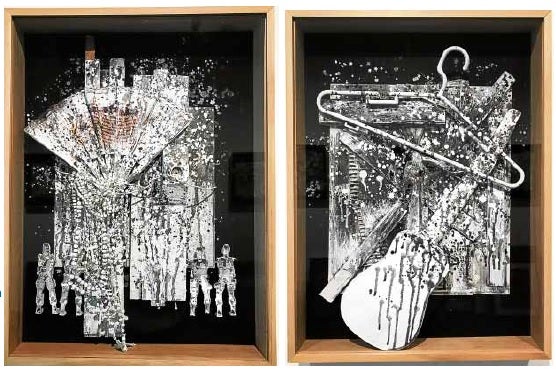 Jose “Pinggot” Vinluan Zulueta has been moving constantly these past few years. The photojournalist-artist has been mainly based in Manila, but he has been across the region—from Australia to New Zealand and Cambodia. But he has always tried to moor his photojournalism and art in the Philippines.

In his latest solo exhibit at Kaida Contemporary titled “Umbra+Penumbra,” Zulueta tries to merge his photojournalism and artistic practice. Perhaps drawing from black-and white photography he paints polychrome mixed-media works consisting of relics of the past.

“In this exhibition, I am trying to reconnect my childhood by going back to my hometown and create memories by piercing together relics of the past through art,” Zulueta said.

Pinggot reminisces his coming-of-age years living in Tarlac. Back then, everything was not yet complicated, he wistfully says. He recalls an easy life in Paniqui playing with whatever simple things he finds at home or in his neighborhood. It was a bucolic existence, he says. He was at peace with nature.

As a result his latest mixed-media paintings are culled not exactly from found objects but from vestiges of the past. The artist explains he went back to his ancestral home and neighborhood and gathered from there remnants of his childhood and incorporated them in his art.

For example, “Starry Night” collects his toy guitar, an old hanger, and even discarded wood in his house painted in different shades of gray. Gray presumably dovetails with the “Umbra and Penumbra” of the title since the two distinct parts of the shadow almost always have only two colors, black and white, or a gradated merging of the these.

The pieces as a result reek of nostalgia. “Summer Night Bloom,” a work that shows a bouquet of fake roses placed beside a withered palaspas (Palm Sunday frond), reminds one of those tacky decorations in the provinces and of Holy Week during summer break.

Zulueta is known for his abstractions. But he literally goes representational and figurative in his latest series, and since he’s tackling something very close to his heart, his works in the new series are personal and nostalgic.

Also showing at Kaida is Demosthenes Campos’s “Trapped in the Undergrowth.”

Campos’ new works tackle once more the fragility of nature. He says he was inspired by the beauty of undergrowth.

“I still tackle the environment (like my previous shows), but I was really inspired when I saw the beauty of the undergrowth,” he said. “I want to spread the message that nature is still important, especially now that there are drastic changes happening around the world.”

Other works are hidden inside a cabinet installed in a corner of the gallery. Opening these drawers reveals a variety of landscapes—“Brushwood fence,” “Shruberry” and “Lichen.”

Perhaps the most noticeable work is “Scape Nest”—a huge mixed-media parted by a ruffled division in the middle. A closer look reveals tiny crosses scattered around along with tiny threads that resembles small flowers and dandelion seeds. –CONTRIBUTED