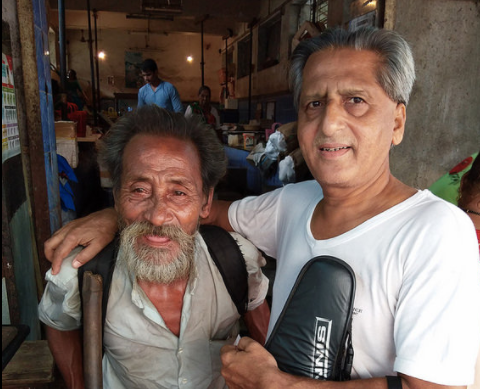 Gambhir Singh vanished from his home city of Imphal, Manipur in India four decades ago, in 1978, and has not been seen by his family since then.

It was only last year when Indian photographer Firoze Shakir took to his YouTube and Flickr accounts to share pictures and videos of Singh, which eventually found its way to his relatives.

Shakir often documents the lives of Indians from all over, from street vendors and ear cleaners to locals playing tennis and street processions. It was in October of 2017 when he chanced upon Singh, now 65, in the indigent streets of Mumbai, about 3,000 kilometers from Manipur. Shakir took pictures and videos of Singh, singing old Hindi songs.

Shakir wrote back in October last year that he got to know Singh when the latter would come to Bandra Bazar every morning where Shakir stayed. “I would buy him snacks or give him money, he took a liking to me as I shot his pictures.”

“He was never sober always incoherent. He once told me he was in the Army, he left the army when his father died. He came to his hometown to till his farms [then] there was some misunderstanding with his brothers. He left Manipur and was working in Mumbai,” wrote Shakir then.

Shakir’s YouTube video caught the attention of Singh’s family members recently, prompting them to contact the Imphal police, who in turn contacted the Bandra police in Mumbai, as per the Times of India today. They were also sent photographs of Singh when he was younger, to help with his identification.

“We sent teams to Bandra police station to identify this man from his photo. Our constables found him at Bandra railway station and brought him here. We sent his photos to Imphal police and they, in turn, showed them to his family,” Pandit Thakaray, senior inspector of Bandra police, said in the report.

At this point, Singh’s family are awaiting his return — a much-anticipated homecoming that was 40 years in the making.

Shakir’s video of Singh on October 2017 may be viewed below. Cody Cepeda/JB