The unsettling beauty of ‘The Kundiman Party’ | Lifestyle.INQ ❮ ❯ 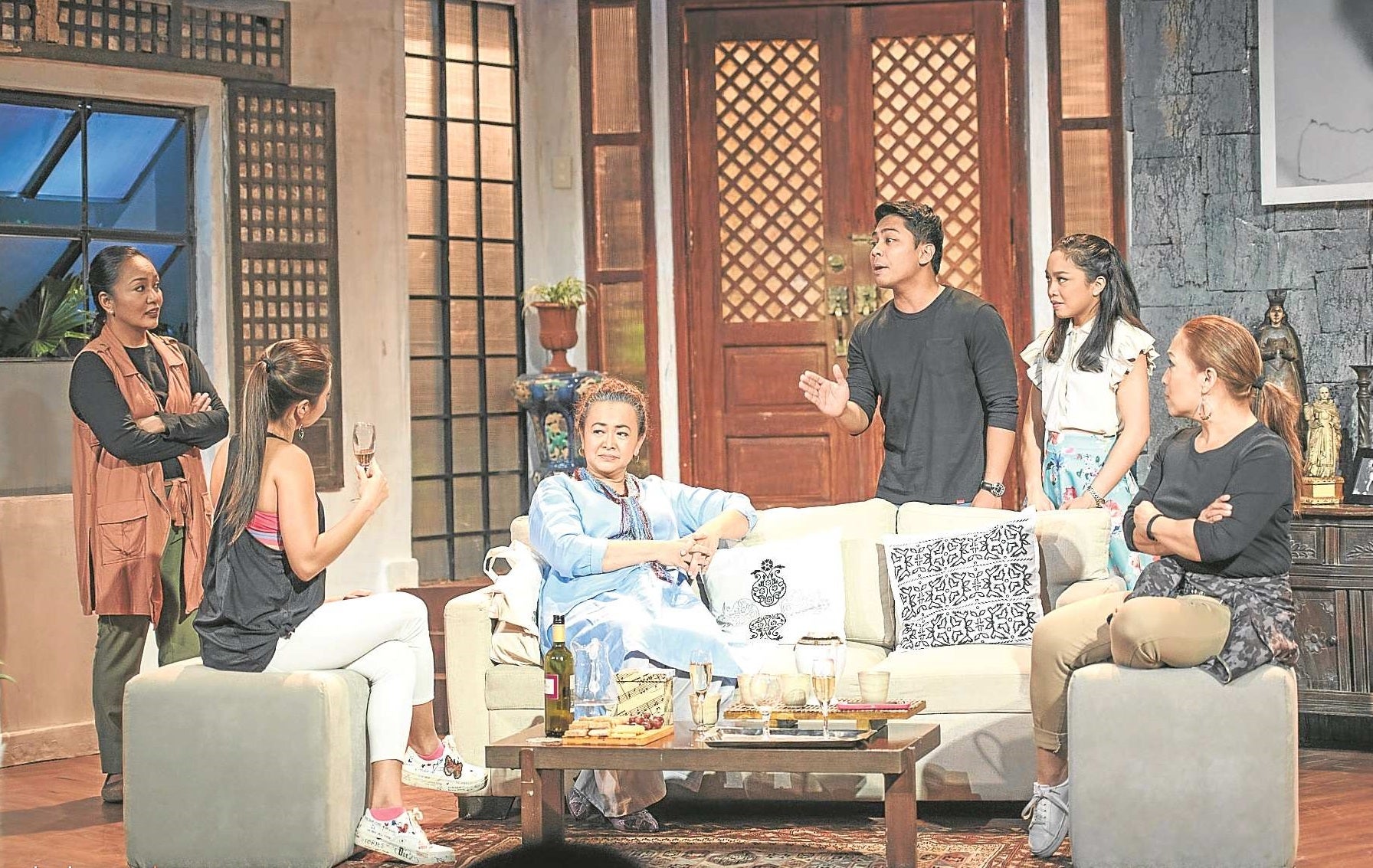 The unsettling beauty of ‘The Kundiman Party’

What is it about Floy Quintos plays?

“The Kundiman Party” is a world away from Quintos’ “Angry Christ” last year, but it shares with the latter their author’s near-magical ability to capture an entire social milieu, portrayals so layered that they almost demand multiple viewings.

In this case, it is the world of the politically aware upper-middle-class, comfortable in their lifestyle but agitated over the looming threats to their society and country and groping for an effective response.

Quintos captures this world by assembling an array of vivid characters, collectively a recognizable social set, yet fully realized as individuated human beings with personal quirks, flaws and ideals. There is no easy resort to stereotypes. The wonderful triad of titas—played by Stella Cañete-Mendoza, Frances Makil-Ignacio, and alternates Jenny Jamora and Missy Maramara—are likely one of local theater’s most memorable ensembles of a comic type, but they are not reduced to figures of farcical fun, but are lovely personalities, funny and poignant and ornery, their ricocheting affection and contrariness toward each other a highlight of the play.

The “villain” senator (Teroy Guzman) could easily have been a caricature of a trapo (traditional politician) we know so well, but in his brief appearance was accorded a formidable presence, with an articulated logic, however reprehensible, and somehow real if twisted “family values.”

And the young activist Bobby (Kalil Almonte), who, on first impression, might seem mainly a foil to the more flamboyant female roles around him, on deeper consideration (the benefits of a second viewing!), comes across as perhaps the most complex role, in whom intersect not a few of the themes that bedevil society and the socially aware: idealism versus pragmatism, the problematic privileging of the political over the personal, the ambivalence of family as anchor and as corruptor.

Quintos takes this gallery of vital if flawed Filipinos and sets them in an absorbing, highly original narrative where their, and the country’s, contemporary dilemmas are matched against the spirit of a nationalist past embodied hauntingly in the traditional kundiman. The play may not be a musical in the strict sense, but the moments when the ingenue character Antoinette (Arya Herrera alternating with Miah Canton and Teetin Villanueva) gives endearingly tentative voice to the songs wrap the play in a beautifully musical aura that transcends the conflicted present.

Yet it is not an escapist transcendence, as the playwright brings us back to earth in the “twist” that snares not only Bobby but also the audience in an open-ended, ambiguous ending. This is not a facile play, one out to give easy answers; it’s clear about its convictions as well as the hard choices staring its characters in the face. This viewer confesses to ending the play (both times) uplifted by its beauty, but unsettled by its ambiguities.

In the end, of course, this was a theatrical performance, and all the production elements rose to match the material, from the marvelous direction by Dexter Santos, which sensitively orchestrated the layers of the story and the dance of the characters, to the elegant stage design of Mitoy Sta. Ana and the evocative lighting by Monino Duque.

(Particular kudos to the latter for that scene when Antoinette was singing “Bituing Marikit” to Bobby and presumably all eyes were on the young couple, yet over where the titas sat, an understated glow eloquently lit up their expressive rapt faces: one of those little details that made such a satisfying whole of the production.)

The glory of the production, the critical element that gave life to the world portrayed, was its uniformly superb cast. What a roll call of outstanding, generous performances! Makil-Ignacio as feisty, combative Mayen, Cañete-Mendoza as caring but conflicted Helen, and Jamora and Maramara as delightfully liberated Mitch (a treat to watch two wonderfully different takes) were a virtual panorama of excellent character acting.

Counterpointing them were the millennials: Herrera and Miah Canton (I regret missing out on Villanueva), touching as the diffident Antoinette growing through heartbreak and grit; and Almonte in a brave performance of what could be seen as a thankless role, segueing from attractive idealism to cause-obsessed obtuseness to that wrenching final abandonment (or however one interprets his departure).

And Guzman, in his brief turn as the senator, provided a master class in giving the devil his due: a human face.

Above all was the spectacular performance of Centenera Buencamino as Maestra Adela, as hauntingly nuanced—hilarious, sad, passionate—as any I have watched. The moment in the play that almost broke me came at the end when, bolstering a devastated Antoinette, she for the first and only time sang a kundiman.

Just as Quintos forced hard questions and choices on Maestra Adela and his other characters, he poses the same to the audience: Fight or flight? Struggle or acquiescence? Comfortable retirement or return to the fray? And how to define one’s limits?

Inspiring though the finale might have been, it was actually open-ended—not just for Bobby, but for everyone in the audience as they filed out. —CONTRIBUTED