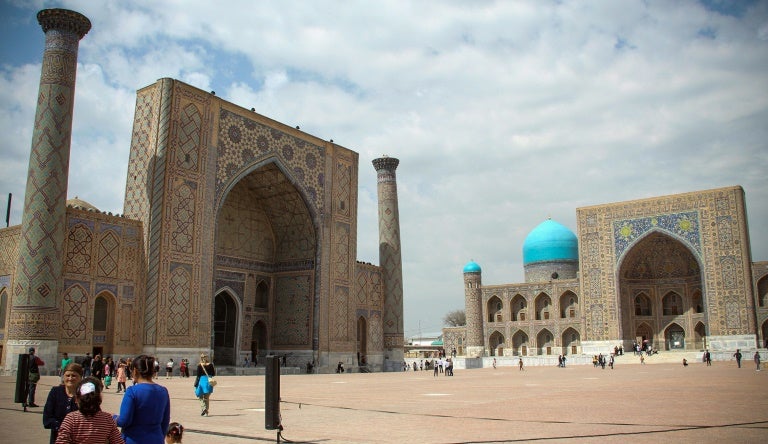 But the photogenic 30-year-old pair are frontline members of a newly-formed, user-friendly Tourist Police deployed in the famed Silk Road city of Samarkand and other hotspots as a visitor boom sweeps the Central Asian country.

The force, established in January, is viewed as part of a broader opening initiated by Uzbekistan’s authoritarian government following a long period of self-enforced isolation.

More than 2.5 million tourists visited Uzbekistan last year, a 24-percent increase on the previous year, according to the UzDaily news site.

“In the past I worked as a teacher and then as a wedding stylist. I even won a national prize as a stylist,” recalls Zukhra Rakhmatova, one half of a sister act proficient in English, Russian, Farsi, Turkish and Japanese. “But our grandfather served in the force and our uncle too,” Rakhmatova told AFP. “It was always our dream to serve.”

A short walk from the ceramic and marble dazzle of the three madrasahs towering over the city’s old square is the statue of Islam Karimov, who ruled the country from before independence in 1991 until his death in 2016.

Laid to rest in a grand mausoleum in Samarkand’s historic centre, Karimov is criticised by rights groups as the architect of one of the world’s most repressive and closed-off police states.

Far from being disavowed, his monument is now yet another photo opportunity for visitors and wedding parties in the city, where he was born in 1938 and remains widely revered.

“Everyone makes mistakes but Islam Karimov is a hero. He worked day and night to protect the Uzbek people,” said a 22-year-old bridesmaid posing for pictures by the monument.

The young woman, who did not give her name but said she had travelled to Samarkand from the capital Tashkent, refused to say what “mistakes” she thought Karimov had made.

Whether out of political pragmatism or genuine deference to a man he served for 13 years as prime minister, Karimov’s successor, 60-year-old Shavkat Mirziyoyev has also continued to honour his mentor in public.

In the aftermath of the former leader’s death, new strongman Mirziyoyev likened him to a “father,” even as he toned down some of the totalitarian excesses that defined Karimov’s 27-year rule.

Foreign tourism, which grew by around a quarter during Mirziyoyev’s first year in office emerged as a key battleground in a power struggle that pitted the new reform-touting president against regime hardliners.

In February for instance, Mirziyoyev ordered the introduction of a 30-day visa-free regime for citizens of seven countries (Israel, Indonesia, South Korea, Malaysia, Singapore, Turkey and Japan) and relaxation of registration rules for citizens of 39 others.

In cities like Samarkand, the changes were cheered by a population that endured long stretches of economic stagnation under Karimov.

“(We need to) open up of course!” said Malika Shakhimardonova, a chef at a mutton-grilling teahouse in the shadows of the Bibi-Khanym Mosque, completed on the orders of medieval conqueror Tamerlane in the 15th century. “Let the tourists arrive to us like brothers and sisters!” said Shakhimardonova, whose kitchen is expanding.

Many saw significance in the fact that Mirziyoyev’s relaxation of visa restrictions came days after Rustam Inoyatov, 73, who led the notorious national security service for over two decades, was dismissed.

Inoyatov was widely reported to have blocked a previous effort by Mirziyoyev to revamp tourism and to have insisted on retaining long-standing security measures, including a blanket ban on photography in the capital’s metro.

Such bans, which occasionally saw visitors detained by police, were “rudiments of the Soviet Union” now consigned to the past, said the country’s new 44-year-old tourism chief Aziz Abdukhakimov.

“We want tourists to take as many photos as possible. Put them on Instagram! It is the best advert for the country,” he told AFP.

The Rakhmatova sisters, who scoot around Samarkand on two-wheeled, motorised “Segways” and are trained to administer first aid, certainly seem far removed from the grimmer elements of a former communist police state. But Fatima jokes their dual presence on the tourism beat might sometimes give visitors a different impression.

“Some tourists will see one of us close to one attraction then move on to another and find the other sister standing there,” she explained.

“They smile but sometimes give us a strange look. Probably because we are identical they think the police is following them around,” she laughed. JB