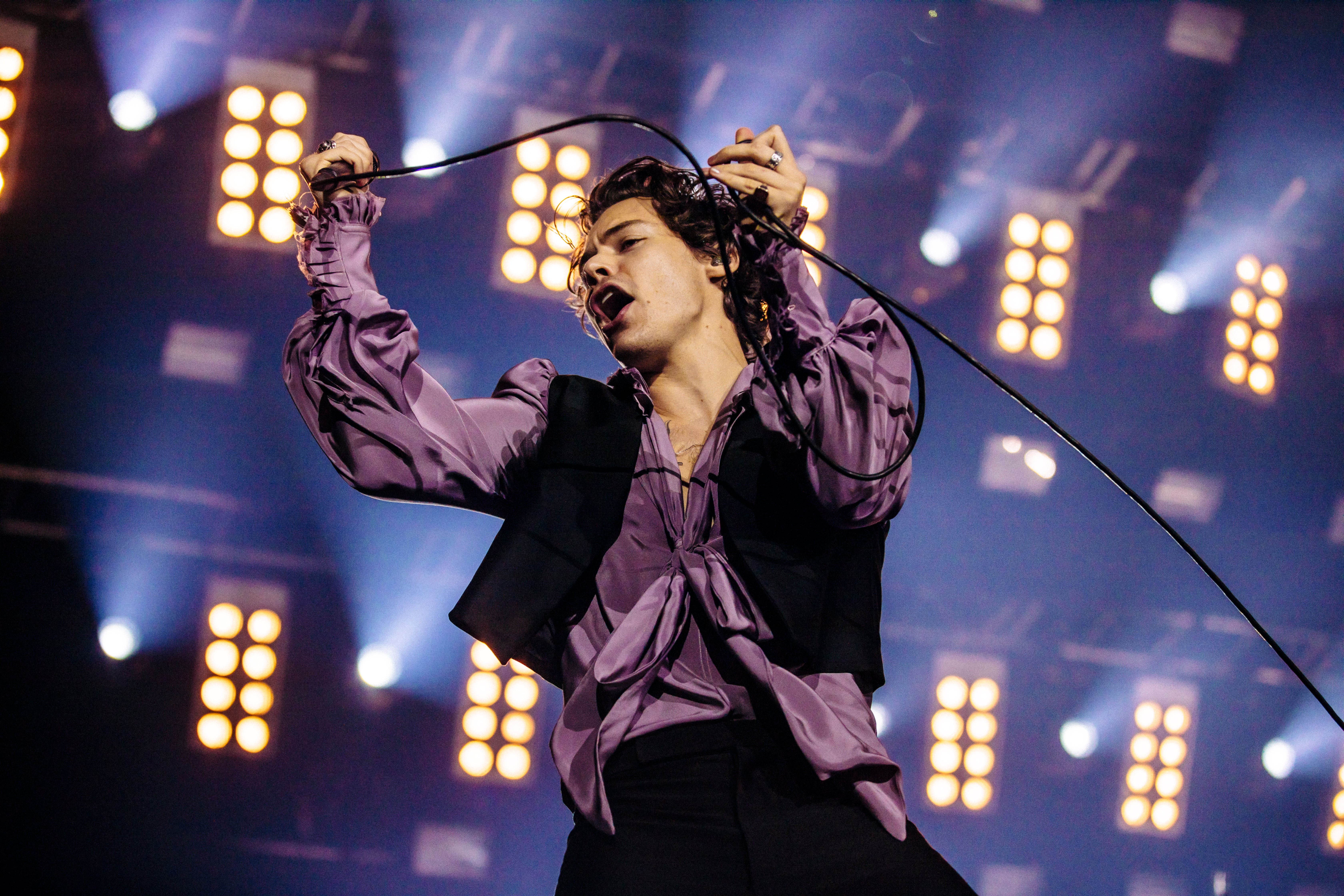 Spending the night with Harry Styles

“I’m having your baby, it’s none of your business!” we screamed at Harry Styles at the Mall of Asia Arena as he did his trademark “daddy dance.”

We were singing along “Kiwi,” the closing song in his Manila gig. We wanted more but he already played his entire album, plus some “One Direction” songs and two covers. He even played unreleased tracks—“Medicine and “Anna”—so, basically, there’s isn’t any song left for an extended encore.

The info on Spotify’s Behind the Lyrics bit says that on “Kiwi,” “Harry goes mental for a girl who may or may not be from Oceania.”

Maybe it’s about a person, or maybe “Kiwi” is a multipurpose rock track: One, it enables fans to shout claims of being Harry’s baby mama (never mind that the majority of concert goers were minors). Next, it showcases Harry’s retro dancing.

British Vogue described the frolic as “Mick Jagger-esque dance moves.” Teen Vogue quoted a Tweet saying it’s the dance dads do on barbecues. However one interprets it, we can all agree that it is Harry’s happy dance—and it rocked the Mall of Asia Arena that Labor Day.

To be fair, the show kinda started on time. The American all-girl indie band Warpaint was on around 8 p.m., to front “Harry Styles: Live on Tour.”

On the video wall, an animated countdown of Harry’s hands solving a Rubik’s Cube played on loop. The puzzle was solved and Harry emerged from illuminated smoke, opening the show with the anthem “Only Angel.” 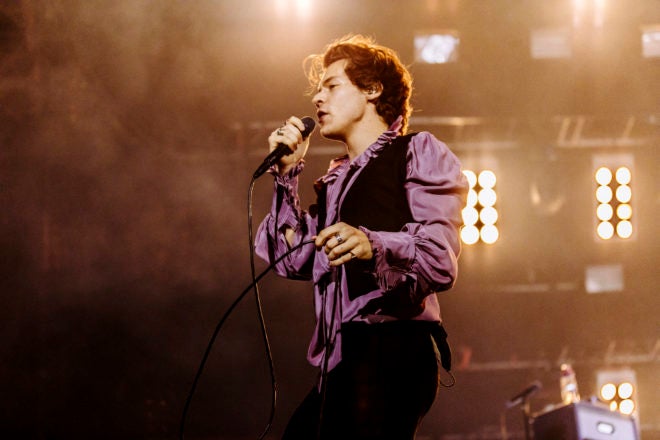 Harry, 24, usually performs in bespoke designer suits (he models for Gucci), but for extra humid Manila, he wore an ensemble by young designer Harris Reed. The 21-year-old Central Saint Martins student created an outfit comprised of a lilac silk blouse with a big bow, paired with black wool waistcoat and matching flares.

He accessorized with white-gold stacking rings designed by Jason Moss, said to be a gift from Sony Australia. The jewelry was stamped with the Latin translation of “Treat People with Kindness”—Harry’s running theme for the tour.

Over almost two hours, Harry performed “Ever Since New York,” “Two Ghosts,” “Carolina.” The songs are obviously about women (one hints of Taylor Swift); Variety describes them as a “classic cocktail of psychedelia, Britpop and balladry.”

He did a rockier version of One Direction’s “Stockholm Syndrome” and “What Makes You Beautiful” while brandishing a rainbow flag. 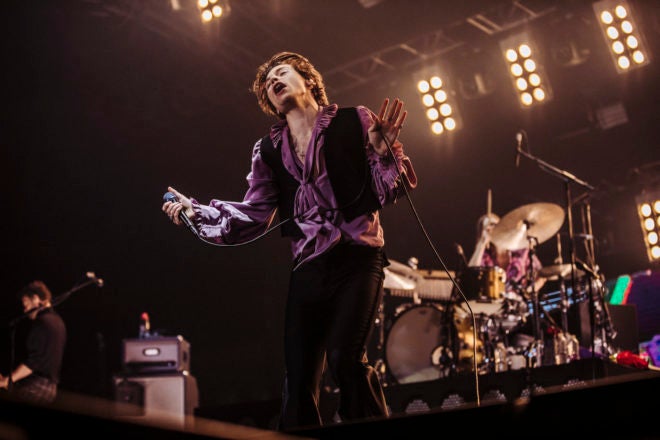 Fans who watched concert clips online knew that by “Meet Me in the Hallway,” Harry would be crossing the ramp that cuts the venue into half to ascend the B stage at the back.

On that tiny stage, a more tangible Harry sang “Sweet Creature” and an acoustic version of 1D’s “If I Could Fly.” Fans lit the arena with multicolored light from their cell phones, while waving fresh and faux sunflowers. We later found out that it’s the “Rainbow and Sunflower Project” organized over Twitter.

The show is predictable; we already know that the setlist includes his first hit “Sign of the Times,” and his versions of “Just a Little Bit of Your Heart,” by Ariana Grande and “The Chain” by Fleetwood Mac. He made it clear from the start that he has only “10 songs” of his own.

We already saw it on YouTube, was the sold-out gig worth our money?

Of course, it’s the Harry Styles experience. The rockstar has an entire Tumblr page dedicated to his sharp jawline.

We wanted raunchier banter as he did in other cities, but the most we had was him egging the crowd to sing happy birthday to a dad in the audience, and a “Magandang gabi, Pilipinas” greeting.

Harry’s music is still mostly pop rock, but edgier, perhaps compensating for the 1D juvenilia, in the same manner that this writer succumbed to mainstream music after snubbing boy bands in the ’90s (can’t really explain the transition from hardcore stuff such as Megadeth and Pantera).

The morning after rendered a glow, which can only come from spending the night with Harry Styles. 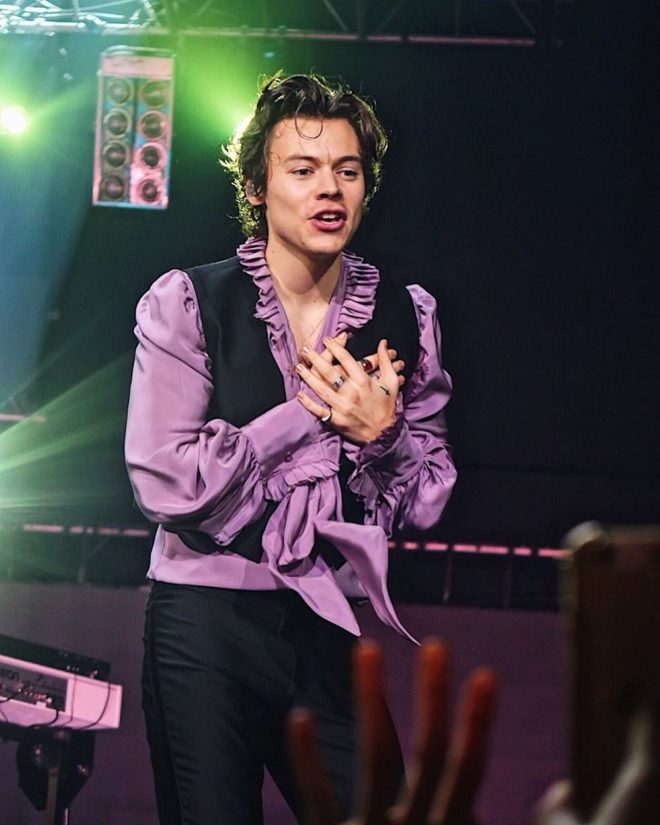