Italian restaurants abound in the metro, but Caruso Ristorante Italiano stands out for the warmth and involvement of its owner.

Owner Emilio Mina is as passionate about promoting the arts as he is about upholding the authenticity of the cuisine of his native land. The restaurant has evolved into an intimate space for concerts and art exhibits.

Dressed in a blazer with a pocket square over a polo shirt, Mina has an Old World elegant demeanor. He is a paternal figure at Caruso, befriending loyal patrons while keeping a sharp eye on the service of his staff.

Over his light lunch of salad, crostini and parma ham with cantaloupe, Mina tells us about himself. He was born in Genova. From 1958 to 1981, he ran the family-owned, 600-workforce factory that manufactured stockings.

The Minas eventually sold it as a business opportunity.

Mina then established Spaziele Splendy, which specialized in microfiber bathrobes. He proudly says the special fabric won an award in 2002 in New York. His business was also involved in fashion brands such as Stefanel, and he was also a consultant for Japanese investors in Italy.

While doing business in Florence in 1989, he bumped into a Filipino woman in the elevator one morning. Stunned by her looks, he greeted her, “Good morning, beautiful lady.”

At midday, he bumped into her again; on the third chance encounter in the elevator at dusk, he invited her for cocktails.

It turned out that Evelyn Palabyab owned two boutiques and supplied some department stores in Manila. Mina eventually provided her with Italian brands. Over time, their friendship blossomed into a serious romance.

However, Evelyn suffered an aneurysm in 2003. Mina continued the courtship despite her disability, and married her in 2006.

One day, he came across Caruso Ristorante Italiano at LRI Plaza on Nicanor Garcia Street, Makati, and was impressed by the authenticity of the cuisine. Evelyn then ventured into partnership with the restaurant’s founder. Mina hoped that Caruso would keep her busy despite her disability.

Meanwhile, Mina shuttled between the Philippines and Italy for his overseas business. Three years ago, he finally settled in Manila and took full control of Caruso while taking care of his wife.

He enhanced the ambiance of Caruso by creating an atmosphere of fine dining restaurant in Rome or Milan.

New dishes inspired by his mother’s recipes were included in the menu, such as the fegati di vitello al venette or liver with white onion and olive oil and vitello tonnato, sliced veal with anchovies, olive oil and lemon. The latter is a favorite of singer-composer José Mari Chan.

“My mother cooked better than any chef,” he says. The restaurant offers butter cookies from his mother’s kitchen. The recipes are uncomplicated to let the quality of the ingredients speak for itself.

What sets Caruso apart is that it is immersed in art, from the cuisine to the special events. To bring in the families on Sundays, Mina organized art contests for children and offered pizza margherita shaped like their favorite animals.

Music is close to his heart. Every Saturday, a pianist plays familiar favorites. Last year, he hosted lunch to honor crossover tenor Andrea Boccelli. Mina entertained the guests with his favorite song “Azzurro.”

An impresario of sorts, Mina organized a concert at the Cultural Center of the Philippines (CCP) with Elena Monti, a star of La Scala Opera. She ate at Caruso after the show.

When the restaurant celebrated its 15th anniversary last year, Mina organized a dinner and fundraising concert, “Crescendos at Caruso,” for the Canossian Congregation. This Italian order is one of the charities of the Philippine Italian Association led by Rustan’s chair and philanthropist Zenaida Tantoco.

The performers were prominent artists who were restaurant patrons. The Italian-themed repertoire began with Chan singing “Deep in My Heart,” which was inspired by an Italian song.

He wrote it for his then girlfriend when she was in Japan. He missed her so much that he sent a tape reel of the song. The next year, he married Mary Ann.

Ingrid Sala-Santamaria. The 10-year-old impressed the audience when she belted out the high notes in the Broadway song, “Don’t Rain on My Parade.” 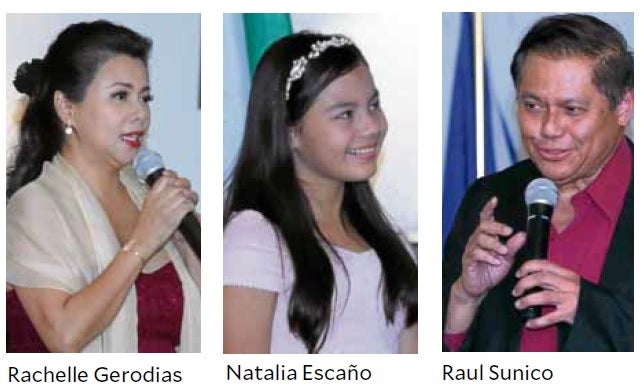 Taipan, music patron and tenor George Yang performed with great relish the Italian folk song “Torna A Surriento” and “Dicintello Vuje.” He sang with his coach Gerodias in “If We Were in Love.”

Unable to contain his enthusiasm for music, Mina sang a few lines in the spirit of fun. –CONTRIBUTED