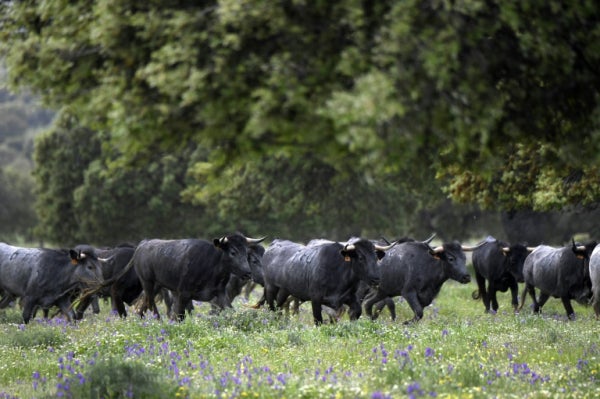 The Las Tiesas de Santa Maria ranch, with its 1,100 animals spread over some 2,000 hectares, is famous among bullfighting fans. © GABRIEL BOUYS - AFP

“Here all animals are born and live free until they die,” says Victorino Martin, pointing proudly to the herds of fighting bulls grazing by the Tagus River on a famous breeding farm in Spain.

With their trademark grey coat, the bulls weigh around half a tonne when they reach maturity at five years old. By then some of them will already have been sent to their death in bullfighting arenas, a tradition both cherished and reviled in Spain.

But for Martin, breeding bulls is a passionate, family affair and he stresses his cattle are treated with more dignity and humanity than those destined for people’s plates.

On the Las Tiesas de Santa Maria ranch in the southwestern Extremadura region, the bulls munch peacefully in a field scattered with spring flowers.

It’s a deceptive calm, however. “They fight and kill each other,” says second-generation breeder Martin, a slim 56-year-old vet with a warm smile.

“There are nearly as many deaths in breeding farms as in the arena,” he adds.

The keepers on horseback stay well away. Several sport the scars of horn butts.

The ranch, with its 1,100 animals spread over some 2,000 hectares, is famous among bullfighting fans.

“Victorino Martin, the father, created this farm from nothing and turned it into a legend,” says Juan Diego Madueno, a journalist who specializes in bullfighting.

He bought a herd in 1960 and quickly bettered the breed to make his bulls stronger.

“Before, people would go to the arenas to see the toreros (bullfighters). With Victorino Martin, they ended up going to see the bulls,” says Madueno.

“He allowed breeders to ask for payment for participating in corridas (bullfights).”

“My first memory was going to feed the bulls with him when I was four,” he says.

Just like his father, he is a “novillero,” a bullfighter who fights two or three-year-old bulls.

He carefully selects breeding pairs, and the resulting young bulls and cows are tested on the ranch as if they were in a bullfighting arena.

Those who show the most fighting spirit are destined for reproduction, and their calves will grow up and become “toros bravos” — those who go to the arena.

The others will be sent to the abattoir.

Martin is head of the Fighting Bull Foundation, created by breeders in 2015 to defend bullfighting in Spain. That year, some 300 left-wing municipalities banned shows involving bulls, says the group’s director general Borja Cardelus.

For Martin, the corrida is “a sacrificial ritual where man must risk his life in order to be allowed to kill the animal”.

He also defends the “becerradas”, bullfights for beginners with calves that can be particularly gruesome and have been slammed by animal rights activists.

“They’re necessary for the training of young toreros,” he insists.

However they are becoming “fewer and fewer,” adds his daughter Pilar, 32, also a vet and passionate about bullfighting.

And Martin points to the free-range life of his animals, of which only 10 percent are sent to fight every year, compared to cattle in the food industry, which are often locked up and killed when they are “10 to 15 months” old.

“A breeding farm for fighting bulls is one of few places where a cow can die of old age — up to 22 years — while a dairy cow is killed after her fourth lactation.”

A bull, meanwhile, can live until it is 14 years old.

“Cobradiezmos” may well reach that age. The muscular bull was pardoned for bravery in combat on April 13, 2016 in Sevilla by bullfighter Manuel Escribano.

Since then, he has grazed a wide stretch of land peppered with oak trees, surrounded by 35 cows which have given him seven calves.

But this ritual underscores the respect that bullfighting fans have for the bull. “The fan soaks in the bull’s qualities,” says Martin. “He doesn’t complain, rises above hardship and fights until the end.” MKH