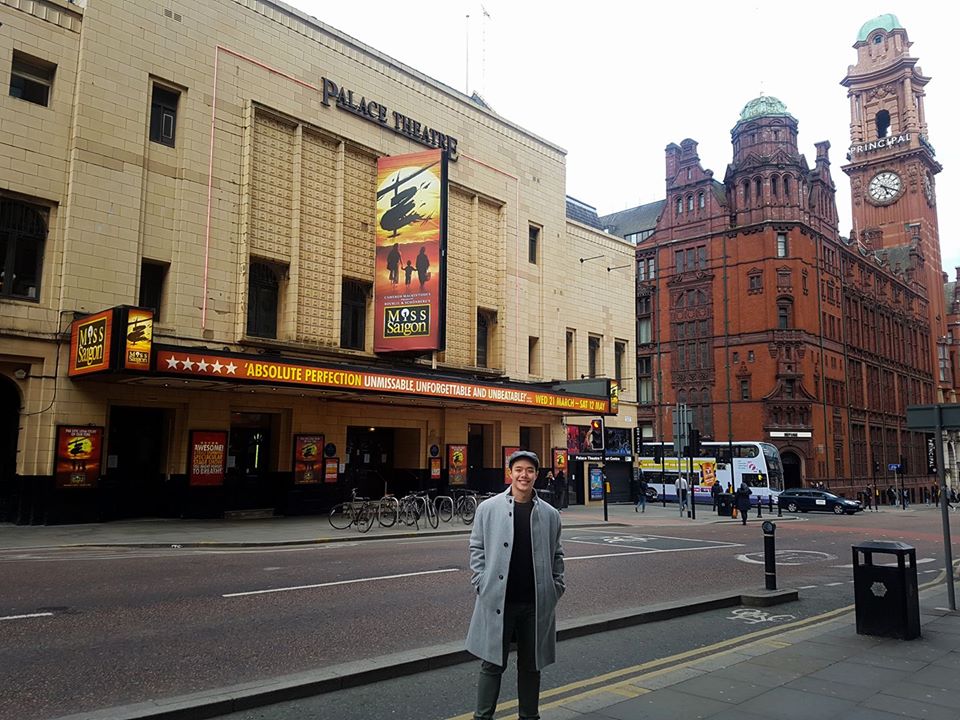 Joaquin Valdes outside the Palace Theatre in Manchester, on the eve of “Miss Saigon's” run in the city.—PHOTOS FROM JOAQUIN VALDES’ FACEBOOK PAGE

“I had already said goodbye to ‘Miss Saigon,’” says Joaquin Valdes, who officially joined the musical’s United Kingdom-Ireland touring production two weeks ago in Manchester. He is part of the male ensemble, as well as 2nd cover (or understudy) for the role of Thuy, currently played by fellow Filipino artist Gerald Santos.

In 2012, when the “Miss Saigon” team came to the Philippines to cast the now-closed West End revival (which coincided with the musical’s 25th anniversary), Valdes was one of those who did not audition. “I had a stable job in advertising, and my fiancée was in the middle of law school,” he says.

A few years later, he arrived at a quandary. With a Film degree from the University of the Philippines-Diliman, he had entered the world of advertising for its stability. Now, despite the good pay, he no longer found the work fulfilling.

“I had built a name for myself as a director, but making glossy TV ads was just disconnecting me from my art,” he says. “I was secretly depressed.”

When auditions for the aforementioned “Saigon” tour came in 2016, Valdes was already looking for a way out—“an excuse to leave,” he says. He tried his luck, but didn’t make the cut.

It was a lot of “struggling and wrestling with myself,” but the rejection also kindled a kind of 11 o’clock number for Valdes. “I realized that my depression was rooted in my desire to return to my first love, and that I didn’t need to wait for a ‘Miss Saigon’ to do what I wanted to do.”

That first love, of course, is the theater, whose limelight Valdes has known since he was in grade school, when he was cast in Repertory Philippines’ 1995 production of “Evita.”

And so early last year, Valdes quit his job in advertising and started applying for theater-related Master’s degree programs abroad. In fact, when the chance came for a self-taped audition for the “Saigon” tour extension, he had already been offered a slot in a university in Britain.

He landed the part in ‘Saigon’ mere days after sending in his tape. “I guess the universe knows when you’re ready. I first auditioned wanting to leave an industry I was miserable in. But that wasn’t the right mind-set,” he says.

Now his contract binds him to the production for one year, taking him and his wife to cities such as Bristol (where the show opens next week), Plymouth, and Zurich, Switzerland.

“The decision to leave the Philippines was a hard one,” he says. “It was going to happen whether or not I got accepted into ‘Saigon.’ I want to build a career in a craft I love and know.”

For someone whose resumé flaunts acclaimed turns in local productions of Tony Award winners such as “Spring Awakening,” “Red” and “Matilda, The Musical,” Valdes confesses his career as an actor in the country has been anything but stable.

“There are limitations in our industry,” he says, “and it’s hardly an industry because there’s hardly an audience. We have a growing number of theater companies and an endless cistern of talent, but where is the audience that will sustain the work? Even big casino theaters can’t always fill their seats. And we’re hardly represented in the public sector. We don’t even have labor laws to protect theater businesses and actors.”

As Lea Salonga, Joanna Ampil and Rachelle Ann Go have shown, a stint in “Saigon” can lead to a myriad of possibilities. Still, Valdes chooses to take everything one day at a time.

“My focus now is to do good work,” he says, “sing and act and stay on top of my game. Earn my keep.”

“Hopefully when I come back,” Valdes adds, “I’ll be a much better performer and a more empathizing person. But I’ll likely do what I’ve always done—hustle. Only difference will be I’d have more world experience to hustle harder.”