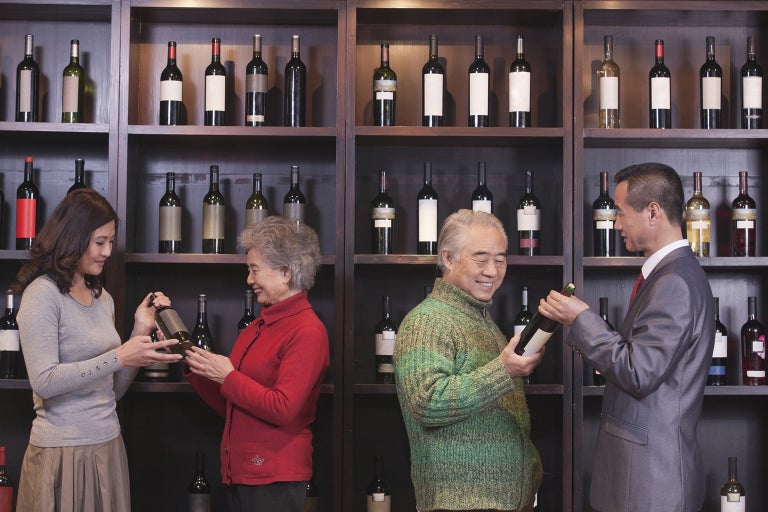 More than 300 experts from around the world gathered at a luxury hotel in Beijing last weekend to taste 9,000 wines from some 50 countries.

After sniffing, tasting and spitting the various vintages, they recorded their notes on touchscreen tablets for the 25th Concours Mondial de Bruxelles, which awards coveted gold and silver medals that producers can then tag on their bottles.

To avoid any risk of bias the bottles were all wrapped in opaque plastic and the results will be announced later this month.

“Why have we come to China? Because it is the most dynamic market in the world,” said Baudouin Havaux, the competition’s president. “In terms of consumption it is incredible, this country is growing at a crazy speed.”

The Chinese drink 1.46 billion liters (386 million gallons) of wine per year — on average almost one liter, or more than one bottle per person — according to a study by Vinexpo, an organiser of international wine fairs.

China ranks fifth in the world for wine consumption after the United States, France, Italy and Germany.

But this figure is expected to increase by 18.5 percent between now and 2021. Over the next five years, China is expected to become the world’s second-largest consumer of wine, behind only the U.S.

“I think gift-giving and status are still the biggest factors” driving wine purchases, said Canadian wine taster Jim Boyce. “A lot of people also drink red wine because of the perceived health benefits. But there is also a growing niche of consumers who drink wine for taste, for pleasure and for experience.”

“People simply have more money now to enjoy something like wine,” said the expert who is based in China, where the disposable income of urban Chinese doubled between 2009 and 2016.

Wine was more a symbol of “prestige” five years ago, agreed Havaux.

“It was important to leave the price tag on the bottle to show that it is very expensive,” Havaux said. “But young people are beginning to grow interested in the product itself.”

Among them is Kang Yi, a 30-year-old interpreter: “I discovered wine when I was studying in Paris. Especially rose, champagne and riesling. When I came back to China, I joined a wine-tasting club.”

Beijing-based Zhou Hewei, who works in insurance, admitted she used to buy wine for dinner parties “without really knowing much about it”.

“Until the day when a friend who had studied wine at university opened a website. She wrote articles about grape varieties, terroirs… I learnt a lot and began to buy more and more bottles.”

As a result of this growing passion, China in 2017 imported 750 million liters of foreign wine, according to customs data, 20 percent up on the previous year. Foreign wines make up 50 percent of all sales in China, according to experts.

“The quality of Chinese wine has been steadily rising for a decade now,” said Boyce, who has tasted more than 1,000 Chinese wines since 2005.

“We see the best Chinese wines are winning hundreds of medals overseas. And just overall, I think most people would say they taste a lot better than they did a decade ago.”

The arrival of e-commerce has changed the landscape for Chinese wine lovers, Boyce added.

“Ten years ago, Chinese people would probably get their wine at a retail shop, and it would be mostly big Chinese brands and red Bordeaux.

“And then the internet came along, and the smartphone came along, and suddenly consumers had thousands of choices, from lots of countries,” he said. “This put a tremendous amount of pressure on the local companies to get better, because those companies were focused more on marketing than on quality.”

But their production costs remain high, as many are forced to bury their vines in winter to prevent them freezing.

“Lots of wine estates are improving their quality and winning medals in major competitions,” said Eva Xie, a Chinese taster and wine critic.

They are making their presence felt at the competition.

“In 2017, 30 percent of Chinese wines tasted at the Concours de Bruxelles were medalists, which is above the average rate of 25 percent,” said Havaux. “That is impressive.” JB