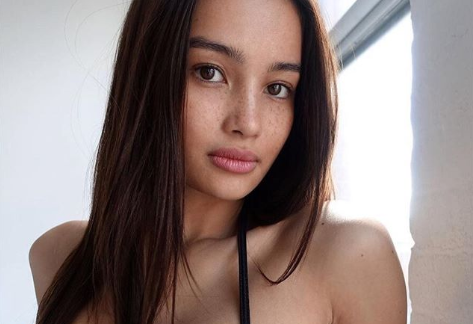 Last May 12, the New York-based model revealed that a tweet she wrote last year turned into a self-fulfilling prophecy. One of her career goals had been to model for Victoria’s Secret—and the opportunity arrived less than a year later.

A day before the shoot, she shared her preparations: “Been working out like crazy, eating very healthy, and mentally preparing myself that it’s actually happening.”

On May 15, Merritt was finally on set and gave a peak at the sportswear as she posed confidently in a mint-blue sports bra, showing off her hard-earned abs.

And after the day’s work, she was able to treat herself to oysters and some piping-hot champorado (Philippine chocolate rice porridge). “Because now I deserve it,” she tweeted.

Netizens have thrown their support for her dream, including actress Liza Soberano.

“Can’t wait for the day when I can finally call you Angel Kelsey,” she encouraged the model.

She also expressed her gratitude to fans: “I’m crying you guys are so supportive. Love you all so much.”  /ra

All the Things You Need to Know About Kelsey Merritt