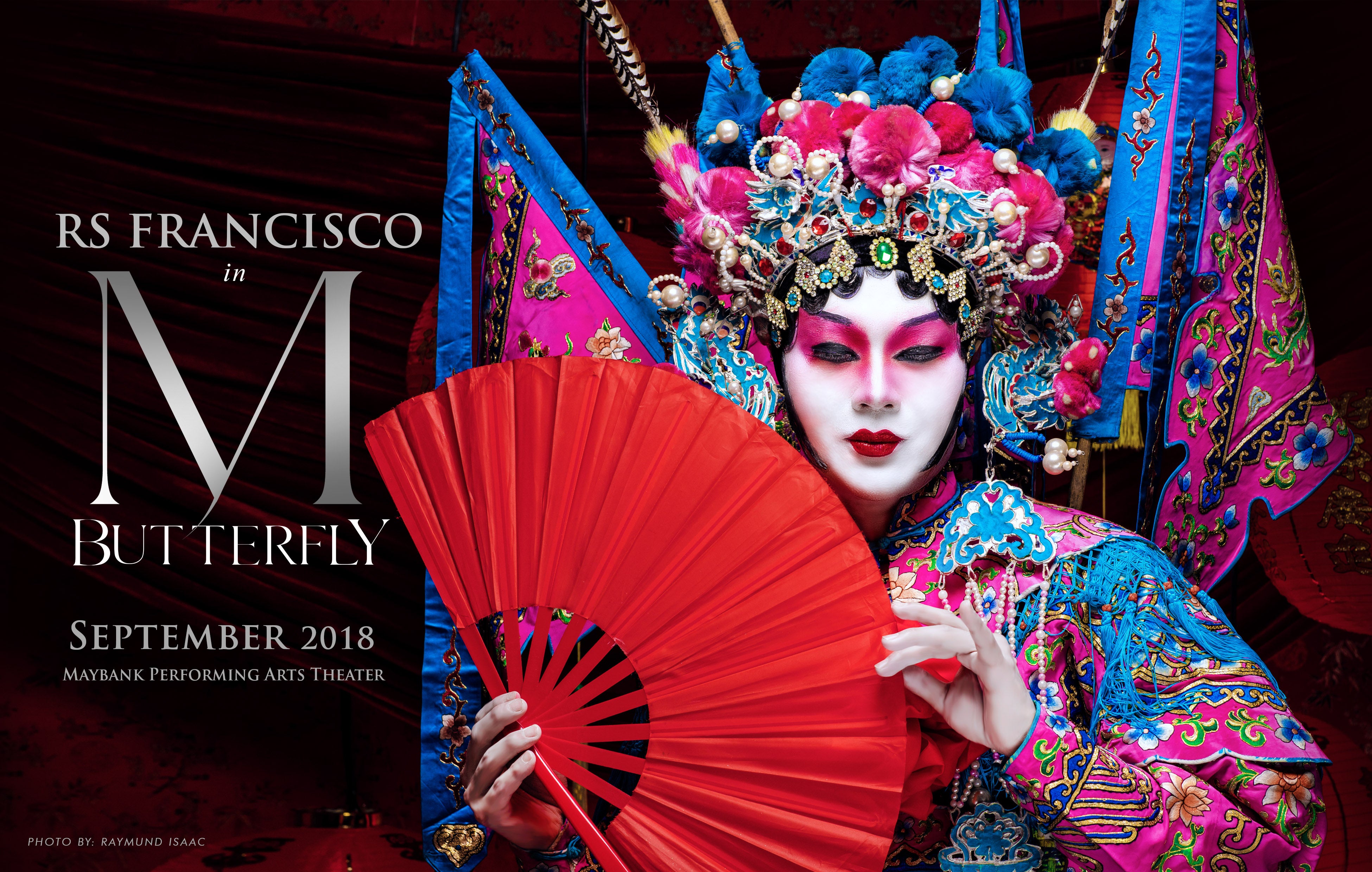 Raymond (RS) Francisco in costume as Chinese opera diva and spy Song Liling for the September 2018 production of “M. Butterfly,” which will run at the Maybank Performing Arts Theater, Bonifacio Global City. —PHOTO FROM FRONTROW ENTERTAINMENT

After 28 years, ‘M. Butterfly’ to beguile Manila once again

Raymond Francisco (then known in theater circles as RS Francisco) became the toast of the Manila theater scene in 1990 when he portrayed the role of Song Liling in David Henry Hwang’s Tony Award-winning play, “M. Butterfly,” in a production by Dulaang Unibersidad ng Pilipinas. The role of the French diplomat Gallimard was played by the late firebrand director Behn Cervantes.

This was just two years after the play had opened on Broadway at the Eugene O’Neill Theater in March 1988, eventually winning the Tony for Best Play and closing after 777 performances. In Manila in 1990, aside from Dulaang UP, Repertory Philippines also mounted a production of “M. Butterfly.”

The good news is that this celebrated play will be revived in Manila in September this year, with Grammy- and Tony-Award-winning Filipino producer Jhett Tolentino behind the new production, along with Kanakan Balintagos (aka Auraeus Solito) as director, and Francisco himself as both coproducer and actor. He will reprise his acclaimed role as Song Liling.

How will he portray the Chinese opera diva and spy nearly 30 years after he first played the part?

Francisco remembers that he was just approaching 20 when he took on Song Liling.

“What I found difficult in the past ‘M. Butterfly’ was having to play a mature role at such a young age,” he says. “I had to conceal my lack of experience as a person and envision that I was much older and wiser. The role pushed me to step up my game as an actor. That required a lot of effort from me. However, the applause and good reviews were unexpected. I wasn’t sure if the ‘young me’ would really fit the role given that this play was based on a true story. But each compliment I received for the role affirmed that I made the right choice by taking the plunge and getting out of my comfort zone.”

Francisco recalls, too, that the formidable Cervantes was a giving and supportive co-actor. “As a character, Gallimard is extremely vulnerable, and this was a trait I latched onto throughout Sir Behn’s performance.”

Now that he’s about to play Song Liling in his more mature years, Francisco is confident he is better prepared for the part. “As a more mature person and actor now, I am sure the image and persona of Song Liling will fit me like a glove. Song is now ripe and ready for the picking, or better yet, ready to be picked.”

As conceptualized by Tolentino, the new production will have a fresher, more modern outlook. Unique costumes will be designed by Eric Pineda, who will also mount a new stage design at Maybank Performing Arts Theater.

“We aim to share the beautiful and unconventional story of Song Liling and Rene Gallimard to the younger generation,” says Francisco. Hence, we need to present something of interest to millennials. With Kanakan Balintagos as the director, we can expect an ethereal, more surreal flair added to the production. Having Jhett Tolentino, a Broadway producer, to conceptualize the play will also allow us to incorporate a Broadway feel to it.”

Over time, Francisco’s views on acting have also evolved. “I’ve always loved acting. It is my first love. Winning my first film Best Actor award for ‘Bhoy Intsik’ has motivated me to open myself to exploring different roles. ‘Bhoy Intsik’ was also my first lead role in a film. The award has encouraged me to be more adventurous and embrace my versatility as an actor.”

Francisco also wears another hat—as chief executive of a business outfit called Frontrow. He credits his theater background for helping him build his business.

“Being in theater and playing different roles gave me a deeper understanding of different characters, of different people. This has helped me a lot in business, since I can connect and relate to people and read them very well. When rehearsals start, though, I will switch off my role as a producer and focus on my acting. I fully believe in Jhett’s capabilities as an award-winning Broadway producer, and I’m confident that I will no longer need to intervene in production matters once we start rehearsals.

“It excites me to learn and to work with the best,” he adds. “Although it is my first time working with Kanakan as my director, I’ve been a silent admirer of him ever since I was in UP. I have followed his work, and can’t wait to imbibe the flavor of his ‘M. Butterfly.’”

The prospect of revisiting Song Liling is also challenging him in new ways.

“Song’s character is both feminine and masculine. By portraying Song, I became in touch with both sides of me as a person—male and female. Also, Song is very sensitive. From this role, I learned to become sensitive not just to myself but also to my co-actors. I am more challenged now as we are introducing ‘M. Butterfly’ to a new generation. Portraying Song Liling all over again has encouraged me to physically prepare for the role—to start working out and eating right. I’m seriously ecstatic to be back in theater again.” —CONTRIBUTED