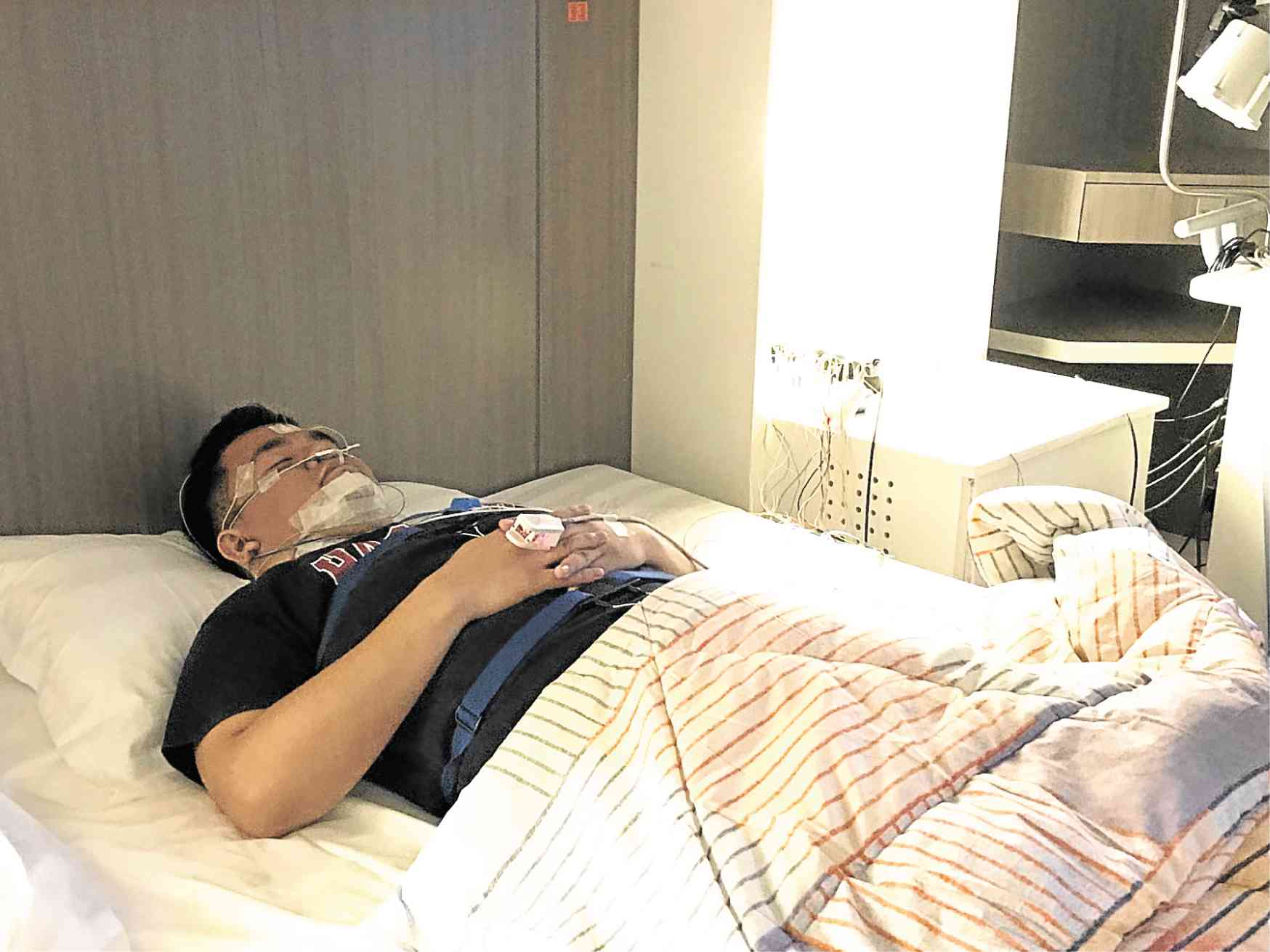 A patient getting screened for obstructive sleep apnea. -PHOTOS BY ANNE JAMBORA

Be worried when snoring is punctuated by silence or body jerk

About three of five men and two of five women snore. Snoring occurs when the muscles and tissue at the back of the throat and mouth relax and fall back during sleep, partially obstructing the respiratory tract.
But when the snoring becomes disruptive, it’s time to have it evaluated.

Up to seven percent of Filipinos suffer from obstructive sleep apnea (OSA). Although snoring is often a warning sign of OSA, not every snorer has sleep apnea, and not everyone with sleep apnea snores, said Dr. Virginia S. de los Reyes, a sleep specialist at Lung Center of the Philippines in Quezon City.

The Sleep Lab has four fully equipped hotel-grade rooms for overnight sleep studies. Pulmonary or sleep medicine fellows study real-time data in a separate room under the supervision of a consultant sleep specialist.

Snoring and OSA can lead to serious health risks such as heart failure, heart attack, high blood pressure, stroke, neurocognitive impairment and accidents due to sleepiness. OSA causes breathing to repeatedly stop and start during sleep.

Be worried when the snoring is punctuated by periods of silence, followed by a snort, a loud gasp or a body jerk.

Delos Reyes said OSA affects mostly males, but menopausal and postmenopausal women have an increased risk, as well. The risk goes up with age, prevalent among those 50 and above, but is not a normal part of aging.
OSA affects people of all ages, including children. She said that while people typically associate OSA and loud snoring with obese males, not everyone with OSA is obese.

Sometimes, OSA is a mechanical problem. During sleep, the tongue falls back to the soft palate, and the soft palate falls back against the back of the throat. This closes the airway so that when the chest expands to inhale, no air can enter the lungs.

Hence its treatment can involve using a device that keeps the airway open, or a mouthpiece that thrusts the jaw forward during sleep. In severe cases, surgery is also an option.

Symptoms of OSA include stentorian snoring, frequent breaks in breathing caused by an obstruction, excessive daytime sleepiness caused by frequent interruptions of sleep, morning headaches from the loss of oxygen in the blood that flows to the brain as a result of irregular breathing at night, restless sleep, awakening with a dry mouth or sore throat, difficulty concentrating during the day, experiencing mood changes such as depression or irritability, nighttime sweating, and decreased libido.

“Asians are at risk of OSA at lower BMI levels compared to Caucasians. For the same severity of obesity, Asians suffer from a more severe degree of OSA,” Delos Reyes said.

The findings are especially alarming, considering that Caucasians tend to be more overweight than Asians. The difference, she said, is in the facial bone structure; Asians have smaller, more restrictive facial structure compared to Caucasians, making them more prone to OSA.

Some people also can be genetically predisposed to having narrower throats or an enlarged tongue that falls back into the airway. Someone with a family history of OSA is more likely to have OSA, too.

Symptoms among children are a little less obvious. They include bed wetting, choking or drooling, sweating profusely at night, ribcage moving inward when they exhale, learning and behavior disorders, problems in school, sluggishness or sleepiness (misinterpreted as laziness in the classroom), snoring, teeth grinding, restlessness in bed, pauses in breathing, and unusual sleeping positions.

“Although history and physical examination are important in making the diagnosis of OSA in children, no combination of symptoms and physical findings has been found to reliably distinguish OSA from primary snoring,” said Dr. Jonalyn Chris T. Ang, a pediatric neurologist and sleep specialist.

People with OSA often do not know they have it. Many believe they always get a good night’s sleep, despite the brain repeatedly rousing the senses during sleep for the body to get some air. That’s because this period of awakening is so brief people don’t remember it.

The Sleep Laboratory offers its services at about 20 percent less than the standard rate of hospitals. It is one of the labs equipped with the latest polysomnograph in the country, a computerized sleep-wake
and physiological monitoring system.