Getting to know The Dalmore—and tasting it | Inquirer Lifestyle ❮ ❯ 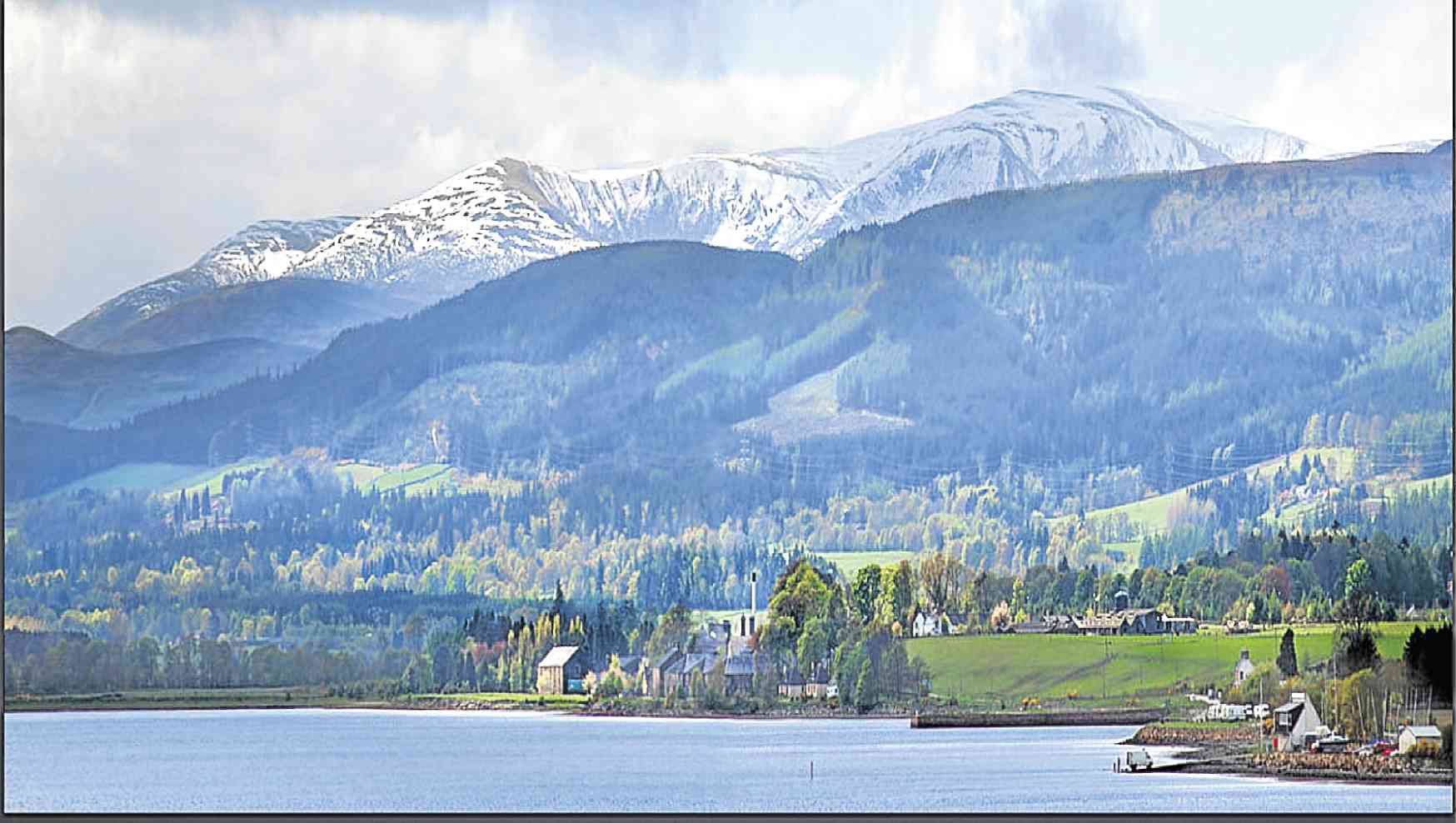 View from The Dalmore Distillery

Getting to know The Dalmore—and tasting it

The four-hour train ride from King’s Cross in London began with an idyllic, rather flat countryside. Beyond the River Tweed, the terrain slowly transformed into a vast, rocky coastline, with the train weaving through roofed hamlets, rolling greens and acres of unblemished Scottish countryside.

Traveling by train was the perfect way to traverse Scotland at a pace where one could soak up the vibe.

Upon arrival at Edinburgh’s Waverley Station, we headed to The Balmoral Hotel and proceeded to The Balmoral Bar to meet our Scottish host, Daryl Haldane, for a refreshing Dalmore whisky sour and a delicious Argentine steak dinner.

We continued our journey the next morning amid even more beautiful scenery.

On the shores of the Cromarty Firth overlooking the Black Isle, we arrived at the famed Dalmore Distillery in Alness, 32 kilometers north of Inverness. The landscape is absolutely breathtaking.

The Dalmore means “big meadow.” The 12-pointed stag head that is on every bottle of Dalmore, the caberfeidh (Gaelic for stag’s antlers), was a gift from King Alexander III of Scotland.

On a hunting trip, the king wounded a stag which then continued to charge at him. Colin of Kintail, chief of the Mackenzie Clan, saved the king’s life by killing the stag with a lance.

As a reward, the king awarded the Mackenzie Clan the right to use the stag head in its coat of arms.

The history of Dalmore began in 1839 with Alexander Matheson (partner in the Hong Kong trading house of Jardine, Matheson & Co.), who bought Ardross Farm and founded the Dalmore Distillery.

The land was fertile, produced good barley, and had an abundant supply of water. Its location was strategic, accessible by land and water.

In 1867, the lease of the distillery was passed on to Charles and Andrew Mackenzie, who bought it in 1891. The pioneering family includes descendants of Colin of Kintail, the man who saved King Alexander III, as captured in a 1786 Benjamin West painting now on display at the National Galleries of Scotland in Edinburgh.

After a fire in 1911, in which 63,874.75 gallons of whisky were lost, the farm was sold by the Mackenzie brothers to William Perrins, the chemist from Worcester, who with fellow chemist John Wheeley Lea, invented Worcestershire sauce, better known nowadays under the brand Lea & Perrins.

In 1917, during World War I, the British Admiralty took over the distillery and used it as a mine factory. In 1946, after World War II, Major Hector “Hac” Mackenzie took over The Dalmore Distillery.

In 1956, the distillery shifted to modern circular germinating vats with computerized systems to handle large amounts of grain.

In 1960, Whyte & Mackay bought the distillery. And in 2014, it was purchased by Alliance Global Group Inc.

The 10-minute drive from the lodge to the distillery was postcard-perfect, with snow-capped mountains in the background, and the sun shining brightly.

Our tastings were conducted by the passionate Shauna Jennens, Dalmore Distillery global ambassador. We had the Dalmore 12-year-old, 15-year-old, 18-year-old, Cigar Malt Reserve, King Alexander III and the 1971 Constellation.

In the evening, after dinner, we had the Valour (European Travel Retail Exclusive), 1995 Vintage and the Vintage 2002.

I must confess that though I’ve been a wine and champagne aficionado for some time, my knowledge of whisky is like that of a toddler, very instinctive.

We were unaware of what we would be drinking, with no prior knowledge of what we were to taste. We immediately claimed our personal preferences.

I have once tried whisky so strong, it made me feel like hair was growing on my chest!

With the 15-year-old, I enjoyed the robust yet elegant and smooth, peppery finish. It came down nice and easy.

King Alexander III was more complex but had the same smoothness and elegance. The aroma of fruits, flowers, vanilla and almonds with a smooth, spicy finish permeated. No wonder it is likened to fruitcake in a bottle with marzipan.

The 1971 Constellation (at $24,000/bottle, or $960/shot) totally intimidated me. I actually felt that such precious liquid gold should not be wasted on a neophyte like me. But after a few breaths, I did have a sip. I was amazed at how subtle it was, with delightful hints of chocolate and fruits.

It was actually comparable to my most preferred Quintessence: smooth, elegant, with the classic Dalmore richness with memorable cassis and orange finish.

I later discovered that Quintessence was aged in Bourbon, and thereafter, in five different California red wine casks, hand-selected by Richard Paterson, master distiller at The Dalmore. Being a red wine drinker, we blindly gravitate to our instinctive preferences.

My favorite by far is the King Alexander III. The light initial flavor that evokes citrus and vanilla is complemented by the darker finish, reminiscent of cinnamon and yuletide spice. Equally rewarding is knowledge of the history and narrative evoked by the expression’s name. To consume King Alexander III is to situate oneself in a legacy as rich as the beverage itself.

Producing whisky is quite complex. The process begins by storing the malted barley that is mashed and then fermented.

Distillation in the stills is a two-step process that produces the spirit, which matures in at least two types of casks—the American white oak bourbon barrels from Kentucky, and the Gonzalez Byass sherry casks from Spain. The combination of these two casks produces the most coveted single malt whisky.

Richard Paterson will take this aged whisky further and create various expressions by carefully selecting other casks for further maturation and the creation of the unique flavors and aromas that you see today.

Clearly, the distillation process behind The Dalmore’s legendary whisky is as much a delicate art form as it is a calculated science. Though the equipment and techniques have evolved with modernism, as with any industry, certain constants remain. The same water that flowed from the pristine river Averon through Alnessin 1839 continues to do so today.

As one savors each sip of the luxury malt, one does so with the knowledge and reassurance Paterson has granted it his seal of approval.

Paterson’s “The Nose” possesses the unique talent of distinguishing each expression to maintain particular layers of flavor, aroma and depth. Preserved in the process is the human element that is inseparable from any masterpiece. No wonder it is referred to as the most revered whisky in the world. The buck truly stops with “The Nose.”

The Provenance of The Dalmore resonates in every product produced in all its expressions—from its basic Principal Collection to its top-of-the-line 21 bottle Constellation Collection. And with growing global demand, this liquid gold is becoming scarce and, thus, more valuable.

In designing the first Dalmore flagship store in the world located in Manila, we are very proud of the collaboration with The Dalmore team. We are eager to open the first Dalmore cigar lounge in Manila in the middle of this year.

Rama O. Co is a student at Wesleyan University in the US, and a student correspondent of Inquirer To be You.