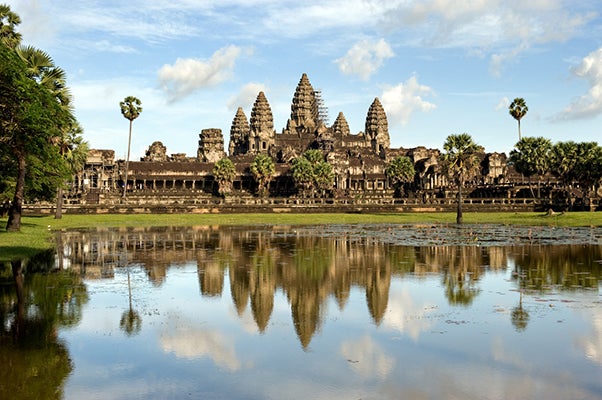 Some tourist hotspots end up disheartening disappointments. Others live entirely up to their hype. According to TripAdvisor travelers, the one landmark that lives up to its mythical reputation is Cambodia’s Angkor Wat, which topped this year’s list of world’s top landmarks for the second year in a row.

The largest religious monument in the world, Angkor Wat stands as a living testament of the Khmer Empire. It was inscribed as a UNESCO World Heritage List in 1992.

Of the more than 40,000 reviews left on the site, Angkor Wat boasts a five-out-of-five bubble rating, with the majority of visitors leaving glowing reviews of their experience.

“Nothing could prepare us for the awesomeness and size of the temple” wrote one visitor from Australia.

Added another visitor from India: “Awesome and if you are the imaginative type, the guides paint such a vivid picture of the bygone era and the grandeur you can picture it all.”

The recurring caveats on many reviews, however, are complaints of overcrowding, stifling heat and ongoing renovations.

The Travelers’ Choice Award winners were determined using an algorithm that took into account the quantity and quality of reviews and ratings for landmarks worldwide, gathered over a 12-month period.

Rounding out the podium on the world list is Spain’s Plaza de Espana in Seville, and the Sheikh Zayed Grand Mosque Center in Abu Dhabi.

Topping the list for best monuments in the United States are two of San Francisco’s most iconic landmarks, Alcatraz Island and the Golden Gate Bridge, followed by the Lincoln Memorial in Washington D.C.

“For travelers thinking about anchoring their trips with a visit to an iconic site, there’s no better starting point than the list of Travelers’ Choice award winners,” said Brooke Ferencsik, senior director of communications for TripAdvisor.

“With awe-inspiring temples, poignant memorials and breathtaking examples of architectural innovation, there’s a wide variety of options to inspire those looking for culturally enriching experiences,” he added.

Here are the top 10 landmarks in the world, according to TripAdvisor travelers: