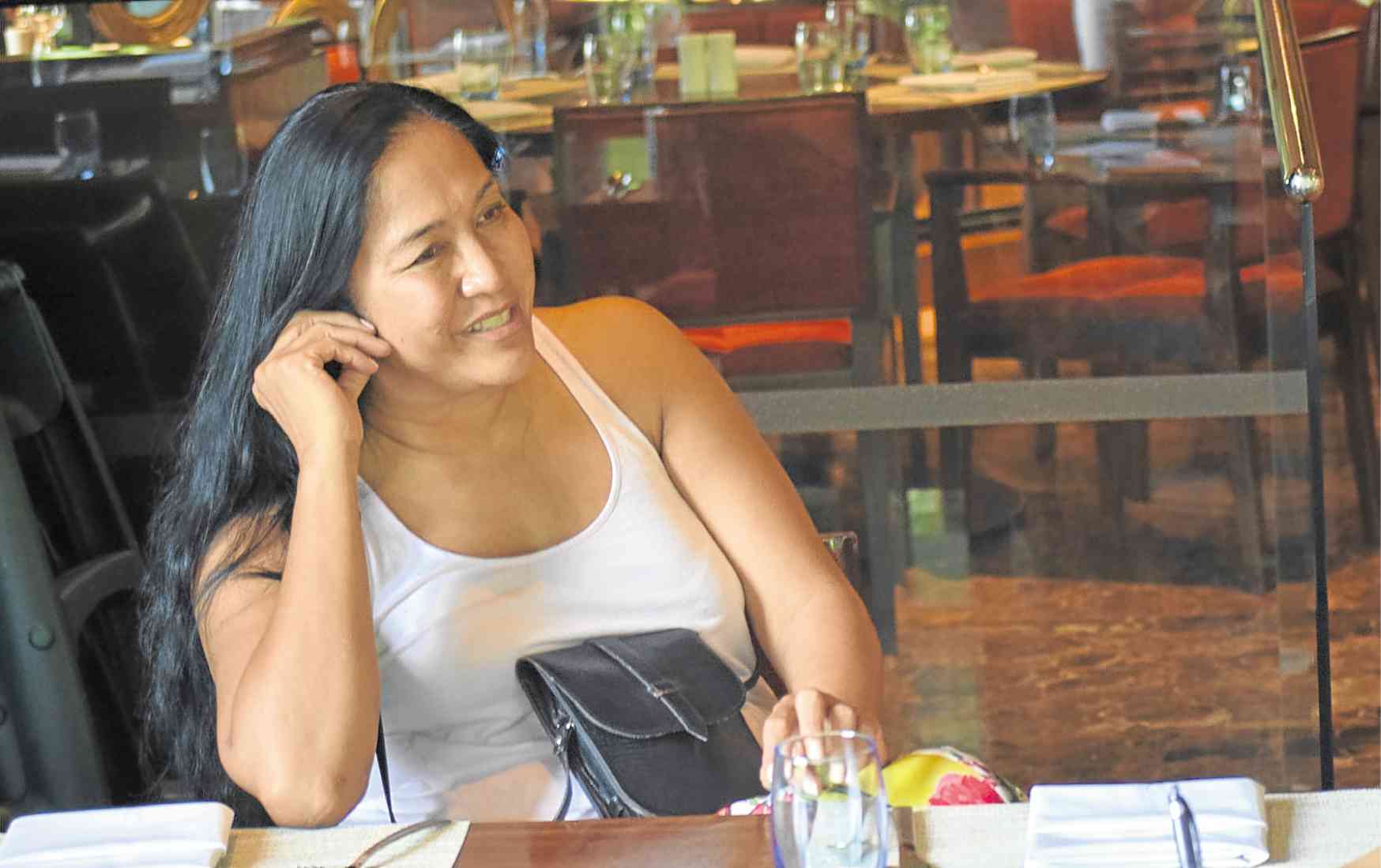 Cold turkey.” That’s how Anna Bayle, the Filipino model who broke racial boundaries in the modeling world in the late ’70s and ’80s, and who paved the way for the supermodel era of Cindy Crawford, Linda Evangelista and Claudia Schiffer, describes how she retired from the fashion industry.

“I was modeling for more than 20 years. Don’t you think that’s enough?” she asked earnestly when we sat down for lunch at Radisson Blu Cebu’s Feria restaurant last week.

The statuesque Filipino beauty became one of the highest paid models of her time, modeling for leading fashion houses Givenchy, Christian Lacroix, Valentino and Yves Saint Laurent (YSL), and reigning on the runways of Paris, New York, Milan and Rome.

She is in the Philippines with her son, Callum Bayle-Spence, to explore the publication of books on her life, and on the different designers and acclaimed photographers she worked with in the ’80s and ’90s.

Known for her signature runway walk, which wasn’t so much a walk as a glide—look it up on YouTube to find out why The New York Times coined it the “Anna Bayle walk”—she decided to retire from modeling when she was at the top of her game.

“I wanted to end on a high note, and when I retired, I never looked back. Designers like YSL and Valentino would give me first-class tickets to go back to Europe to do their retrospective shows, but I didn’t want to disillusion them,” she reveals.

“It’s best to leave when you’re at the top. I was so much a part of the fashion world, and I believe that once you get out of that world, it’s best to just stay out. I didn’t even want to go to the shows anymore, even if I’d get invites to sit on the front row.

The best time to model

“The ’80s were the best time to model. The shows were grand—they were a real spectacle. In the ’90s, things started to change, though, and to this day, models don’t really get to show their personalities anymore,” she muses.

“Modeling was a great outlet for my creativity. I loved being around creative people, and I loved how the designers would create the clothes around me. Modeling allowed me to develop an eye for beauty and luxury. I might not be the supermodel I once was, but I still want to stay in the best places, and I appreciate the finer things in life.”

When asked about her unrivaled success as a Filipino model, she breaks it down simply: “I come from a family of seven. When you come from a big family, you’re always competing for love. I’m the third child, but my older sisters were both overachievers so I felt like I had to knock them all out.

“My family migrated to the United States, but I decided to stay in the Philippines to finish school. I didn’t want to be a ‘second-class citizen,’ I told my mom. But one day when I was about 23 or 24, I landed in Rome, exhausted from a show in Paris. I was there to do Rome haute couture for Valentino. The immigration officer asked me for my visa, and I just snapped at him. I didn’t realize my visa had expired, and he wouldn’t let me through. I had to sleep in the airport overnight. Valentino had to call everyone he knew to get me out of the airport the next day for his show.

“After that ordeal, I called up my mom and asked, ‘Can I still get my citizenship?’ For six years, I lined up in all the embassies to get visas because I was so proud of being a Filipino, I didn’t want to give up my Filipino citizenship. I still keep my Filipino passport to this day.”

On her transition to motherhood: “God gave me a lot of blessings when I was young, but the best was the birth of my son. I could give up anything but that,” she declares.

“After I retired from modeling, I started a lipstick line. My mentor then was the vice president of Estée Lauder, John Demsey, now its head. It was really successful, and I remember just being in awe when I saw my name and lipsticks on display in the window of Henri Bendel’s flagship store.

“But it was kind of like what first happened to Snapple—we expanded very fast and grew too quickly, and I was doing everything myself. And then I had Callum.

“I was in a bad place then. My marriage wasn’t working. I was crying, I wasn’t eating well and I was smoking a lot,” she recalls. “I thought, if I lose my husband, it doesn’t matter. If I lose this business, they’ll think I’m a flake, but it’s all right. But if I lose this child, I will never forgive myself. So I had to let things go, and I became a full-time stay-at-home mom.

“Callum and I are very close. We share everything, and we are very open with each other’s thoughts and feelings,” she divulges.

“I am so proud of my son. He’s got a good heart, and he knows how to love. I am very straightforward with him about my relationship with his father. I’d tell him things like, ‘If you think your dad and I will ever get back together, we never will. I don’t love him, and I don’t think I ever did.’ I’m a big believer in not lying. When you tell the truth, at least it’s out there.

“Callum is now 20. I’d like for him to finish school—he’s studying at Sarah Lawrence College, a private liberal arts college in New York whose alumni include Barbara Walters, Chicago mayor Rahm Emanuel and film director J.J. Abrams—but really, I just pray that he is happy,” she says.

“If there is anything I know about life, it’s that you’ll have your own fate. Look at me. I was a Philippine Science High School scholar, and I was a pre-med student with two scholarships at University of the Philippines Diliman. I was getting paid by the government about $300 a month in high school to study. Back then, it was a lot of money.”

When asked if she is seeing anyone, she answers with a smile, “I have lovers. I write down my goals, and I just recently wrote as one of my 90-day goals to have three new love interests because I now can. Callum is all grown up.

A different kind of mother

“I need to focus on my life again,” she says matter-of-factly. “It was really hard for me when Callum went off to college. I wasn’t ready. It was like someone had died. I was insisting that he come home every weekend, but then a friend of mine made me realize that as your child grows, you have to change into a different kind of mother also.

“Motherhood has been my focus for the last two decades. I was living on my investments and savings. But because my son is going to a $70,000-a-year school, I decided I needed to go back and work,” she says with a laugh.

“I’ve recently gotten into real estate. I’ve never really worked for anyone in my life, so I really enjoy the independence that comes with my job now. I like solving problems, and I like to challenge myself.

“As a real estate broker, I help other people solve their problems. I’ve lived in New York for the last 30 years so I know the city inside out. My clients trust my taste, and I’ve made a name for myself in the industry.”

And make a name for herself, she did. Last March, she was ranked the Top 14 in New York in Douglas Elliman Real Estate, one of the United States’ largest real estate brokerages, which has a total of 7,000 agents.

“You know the saying that goes something like, ‘A woman, in her lifetime, should plant a tree, have a baby, and write a book?’ Well, I’ve done the first two. I love writing, and I’m working on a book on my life so I hope to finish it. I’m an artist, and I like to express myself in whatever I do.”

“I think Anna’s life is extraordinary,” said her longtime friend, film director and producer Albert Almendralejo, who will work with her to make a documentary on her life aptly called “Walk with Me.”

“From a student and model to supermodel, she conquered the fashion capitals and reigned for years. Then she became a full-time mom and now a business professional. She is one of the few Filipinos whose achievement transcends country boundaries and race. She makes us proud to be Filipino. It will be very inspirational and visually interesting.”

“I’m inspired by a lot of things around me. I like being inspired. It helped me a lot when I was modeling,” Anna says. “I’m also lucky, really lucky. God’s been good to me, and I have a lot of gratitude for everything in my life.”