‘Our blood, sweat and tears are all over the place’ | Inquirer Lifestyle ❮ ❯ 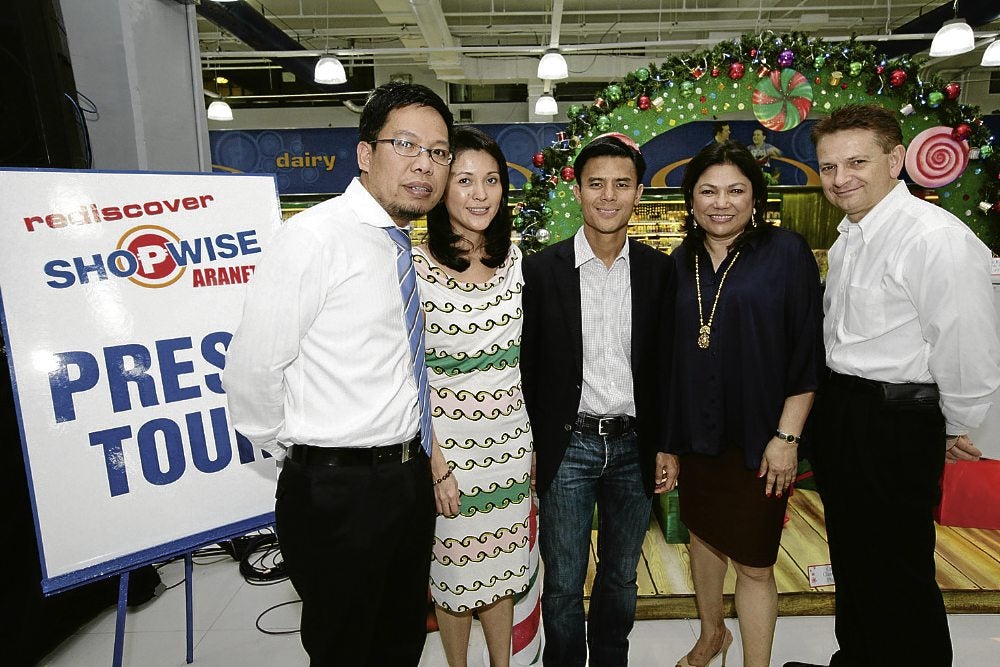 ‘Our blood, sweat and tears are all over the place’

In 2004, Bienvenido “Donnie” V. Tantoco III stood before members of the media to thank them for their support during the grand opening of Shopwise Araneta Center, Cubao. Seven years later, Tantoco, president of Rustan’s Superstores Center Inc. (RSCI), finds himself doing the exact same thing—with a twist.

The store he and his team once launched now sports a brand-new look, a three-months-in-the-making undertaking that didn’t get in the way of the customers’ shopping experience or the branch’s impressive sales.

Despite bustling renovations, it was business as usual for one of the flagship stores of the successful hypermart chain, a branch that “year after year, produces one of the highest sales of any hypermart in the Philippines,” informs Tantoco proudly.

Rows and rows of bright lights, shiny white-tiled floors, wider aisles, and the sensible layout and location of merchandise explain why Shopwise Araneta Center’s interiors appear huge at first glance —even though the selling area has been reduced by 1,000 square meters.

This means more room for a new food area, four kiosks inviting shoppers to sit down and dine on delicious and affordable Mongolian stir fry, sushi and sashimi, assorted deli options, and good old-fashion favorites from a ’50s-style soda fountain.

But Shopwise Araneta Center’s modern ambiance and aesthetics aren’t the only things that have changed through the years. Tantoco notes that the hypermart’s customers have evolved in their standards and expectations, too, and as such, deserve a shopping arena that meets such demands.

“One of the objectives of the renovations was to bring to residents of Quezon City a store that is comparable in quality and environment to the kind of stores our shopper are exposed to abroad,” he declares. “We wanted to develop a store that is of First World quality. We want to exude quality in every square inch of the store.”

Efficiency may be his goal, but in a business built on relationships, Tantoco also strives for warmth, loyalty and comfort. Pointing out how Shopwise Araneta’s spacious aisles and relaxed shopping atmosphere provide the perfect escape from Cubao’s chaotic crowds and traffic jams, the boyish and charismatic RSCI president says he’d like his stores “to feel like an extension of your home.”

“This is not just a renovation,” Tantoco sums up. “It’s an execution of a new vision that we intend to launch in our other branches and in future Shopwise branches.”

Now 45, Tantoco was 8 when he started working for his family’s Rustan’s Supermarket in Makati. Spending summers and Christmas breaks behind the check-in counter and gift-wrapping section (a task he says he didn’t do too well) was only natural for the eldest grandson of Ambassador Bienvenido Tantoco Sr.

“In my family, all they talk about is work,” says Tantoco, who would be assigned to the supermarket’s meat section, information counter, and finance, sales reconciliation, and quality control departments through the years.

“And they talked about it in such a way that it wasn’t stressful, but something they’re truly passionate about. They became my models.”

Armed with a Bachelor of Arts degree in Economics from Connecticut College and a master’s degree from JL Kellog Graduate School of Management, Tantoco originally set his sights on a career in investment banking. His ability to turn flagging businesses around, however, proved his strong suit.

In Hong Kong, he reinvented his parents’ artificial tree venture into a supplier of lush landscaping for a major property development company and the go-to Christmas decorator of all the hotels. In Subic, and upon the instruction of his grandparents, Tantoco and his wife Crickette resuscitated the Royal Duty-Free Shop by adding a grocery and home store section.

Despite the dominance of supermarket giants and the high-risk nature of hypermarts, Tantoco launched Shopwise in 1998 and performed, well, the way new ventures are expected to perform at the onset. “When we opened our first store, we made $100 on our first day,” recalls Tantoco. “My grandmother said, ‘Magsara na kayo!’”

But her grandson persevered, driven no doubt by advice from a man who was once in his shoes. “My lolo, who also started from small beginnings, always said, ‘Nothing of great and lasting value comes easy.’”

He was right, of course: Today, Rustan’s Supercenters Inc. is the Philippines’ fourth-largest food and grocery business with an estimated worth of P17 billion.

Such achievements have not gone unnoticed: a Ten Outstanding Young Men awardee in 2004 for business entrepreneurship, he was recently cited as Innovation Entrepreneur in the prestigious 2011 Ernst & Young Entrepreneur of the Year Awards.

Still, Tantoco is proudest of the fact that the business he started from scratch continues to provide employment to over 3,000 people and counting. “It’s really about having a higher purpose, something that will be the source of your patience and resilience,” he explains.

“Our purpose is to create and preserve jobs. Internally, we talk about it often: who deserves to be promoted, who do we want to help grow, how do we do it?  Everything begins with our employees. Our approach,” he says, “is to win the lifetime loyalty of our best employees.”

Clearly, all these years in the supermarket have been good for him. “I’m more prayerful,” he says with a chuckle when asked how the industry has affected him. “We work our butts off 99 percent of the time. Our blood, sweat and tears are all over the place. But at the end of the day, whatever accomplishments we achieve and crises we survive are because of Him. We’re ordinary people with an extraordinary God.”

Grateful as well to a team of people he describes as “superstars” (“I hire Michael Jordans,” he declares unabashedly. “I don’t settle for anybody less”), he has also become more open-minded and humble. “Whatever we know, and however much we know,” he reminds, “there’s still so much we don’t know.”

One thing that hasn’t changed, however, is his shopping habits. “My bill’s bigger than my wife’s!” he admits with a laugh. Visits to his Rustan’s Fresh and Shopwise branches will find the RSCI president walking through one aisle after another, picking gifts for his son Christian and twin girls Nicole and Camille.

“I buy pasalubong,” he says with a chuckle. “Snacks, juice, deli stuff, chocolates for the kids. They expect it.”