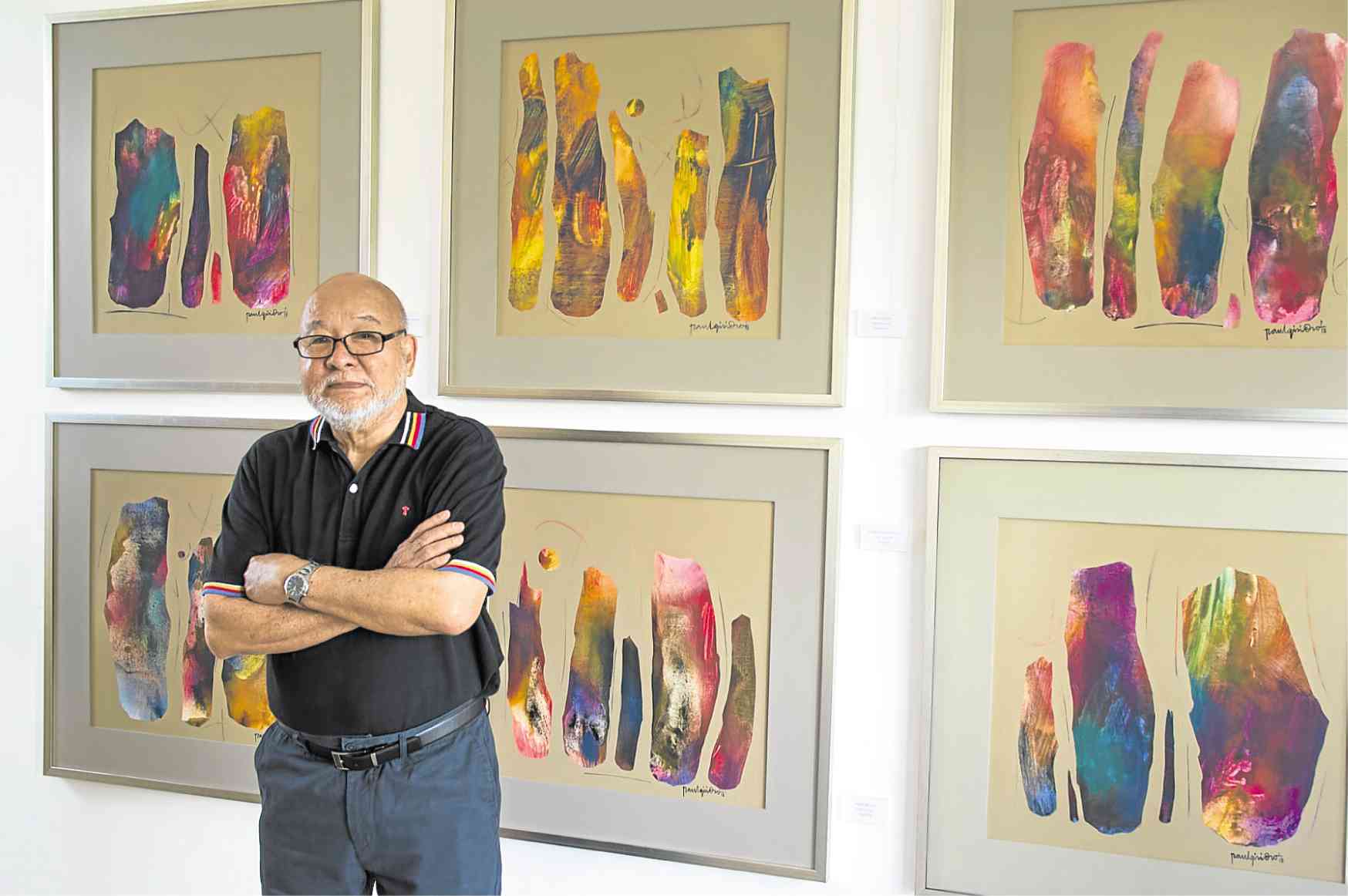 Raul Isidro’s new solo exhibit, opening June 7 at Galerie Stephanie, has a modest title: “Glimpsing Terra Firma.” Modest because surveying the length and breadth of his persevering art, one would easily conclude he has shown as not only “glimpses” of the world, but true and tactile representations of it, albeit in abstraction.

Isidro’s art has all along been solidly grounded, firmly on earth, so to speak.

Born in 1943, Isidro is turning 75 this year with at least 50 years of art making behind him. Although he’s done excellent representational works, he’s an unrepentant abstractionist whose oeuvre could evoke the breathtaking topography of his hometown, Calbayog City, the trade and cultural hub of Samar. Its coastal location and its striking topography are reflected in Isidro’s works, especially in his new series.

In a way, “Glimpsing Terra Firma” is a paean in striking colors and vibrant lines to his beloved Calbayog. Here one could see the Isidro signature: subtlety of colors, intricate gradation of hues, deft composition, sweeping calligraphic lines.

Samar’s typhoon-tossed islands and crags are more than evoked in “Bato-Bato,” the Filipino penchant for repetition underscoring the sheer multiplicity of earth and rock.

“Lunarscape” on the other hand seeks to evoke the surface of the moon at first blush; but what it achieves is a nocturnal panorama of utter romance and nostalgia.

Isidro came to abstraction not exactly by abstract expressionism, which seeks to represent the mind and its derangements, but by figuration and landscapes.

Perhaps because he came from Samar, his bucolic sensibility was hardly affected by the “expressionism” of the modernist art he encountered, first, at the University of Santo Tomas, the cradle of modern art in the Philippines, and later, at the larger art scene in Manila.

Perhaps too because of his natural affinity to nature (pun intended), Isidro was more at home with the meditative aspects of abstraction, rather than its “expressionist” dimensions.

It likewise helped that Isidro was spiritually rooted: Samar island was one of the pioneer missionary endeavors of Spanish Catholicism and a native son of Calbayog, Julio Rosales, became the second Philippine cardinal and the first cardinal-archbishop of Cebu.

The spirituality of Isidro’s abstraction is more than “glimpsed” in the present show: nature and spirit are evoked in calligraphic strokes, resulting in peace and meditation on the part of the viewer.

Even when Isidro tackles nature’s wrath (and Samar is the island of typhoons), what is evoked is not hysteria, but contemplation and perhaps resignation.

A former dean of fine arts of the Philippine Women’s University, Isidro has always been a steady hand in art and has been a mentor and good example to aspiring artists. He has always urged aspirants to learn the fundamentals first: in art, there are no shortcuts.

It’s a preaching that Isidro himself has practiced firmly and steadily. His work ethic is legendary. And his brilliant art is always on firm ground.