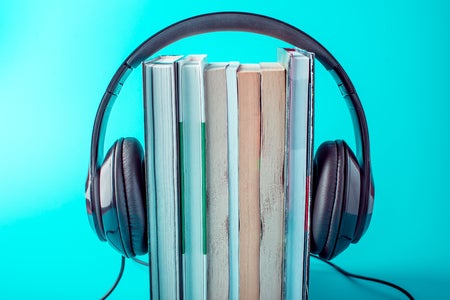 NEW YORK (AP) — As the audiobook market continues to boom, publishers find themselves both grateful and concerned.

The industry gathered over the past week for BookExpo and the fan-based BookCon, which ended Sunday at the Jacob Javits center in Manhattan. The consensus, as it has been for the past few years, is of a stable overall market: physical books rising, e-book sales soft and audio, led by downloaded works, expanding by double digits.

Authors and publishers alike celebrate the format’s appeal and creativity. The standard approach of a single narrator has given way to productions of remarkable ambition. More than 100 voices were used for George Saunders’ historical reverie “Lincoln in the Bardo”, winner of the Audio Publishers Association’s “Audie” for the year’s best recording, a prize handed out during BookExpo.

For some publishers, as many as 1 out of every 10 books sold is in the audio format, a percentage far higher than just a few years ago. And while the industry debated whether e-books expanded the market, or simply shifted it to digital reading, publishers agree that audio brings in new customers and allows them to encounter a narrative when a physical or e-book would be impossible — while driving, for instance, or doing housework.

But as the market thrives, competition grows and the industry looks warily at audio’s dominant seller, Amazon, and the Amazon-owned audio producer and distributor, Audible Inc.

“Audible has done a phenomenal job in creating their business and making it popular and branching it out. And they have become a very strong owner of that market to date. And that’s to their credit,” said Simon & Schuster CEO Carolyn Reidy. “But with strong dominance in the market, problems come.”

Publishers wonder — they say it hasn’t happened yet — when Amazon will demand a greater share of audio revenues. They speak of Audible approaching writers directly. They have turned down deals because the agent was insisting that audio rights be negotiated separately, a conflict that arose during the early rise of e-books.

While major publishers are insisting that all rights be acquired together, Houghton Mifflin Harcourt and Grove Atlantic are among the houses with no audio divisions; those rights often go to Audible, at times for advances unthinkable until recently.

Three publishing officials say that Audible recently paid well into six figures for B.J. Fogg’s “Tiny Habits: The Small Changes That Change Everything” and Adrienne Brodeur’s memoir “Wild Game”. The officials were not authorized to discuss negotiations and asked not to be identified.

An Audible spokesperson told the AP that “We are proud of the work we’ve done over decades on behalf of the listening experience that has created a proliferation of opportunities for authors, actors, and other creatives who are flocking to the format today.”

E-books still easily outsell audio, although their presence has essentially vanished at BookExpo. Gone are the years when countless panels agonized over the e-future and when an entire section of the convention floor was given to e-books. The physical book and physical stores were BookExpo’s unofficial guests of honor, whether during a forum of CEOs or by keynote speaker Len Riggio, the chairman of Barnes & Noble, who delivered his remarks across the aisle from an Amazon meeting room.

Booksellers looked forward to such summer and fall releases as Michelle Obama’s “Becoming”, Stephanie Land’s memoir “Maid: Hard Work, Low Pay, and a Mother’s Will to Survive” and a highly anticipated debut novel, Tommy Orange’s “There, There”. Two former presidents are making unexpected appearances in the fiction section. Bill Clinton has collaborated with James Patterson on the thriller “The President Is Missing” and Barack Obama and former Vice President Joe Biden resurface as crime fighters in Andrew Shaffer’s spoof “Hope Never Dies” billed as “An Obama/Biden Mystery”.

Anti-Trump books such as James Comey’s “A Higher Loyalty” have topped best-sellers lists, but pro-Trump works have a market, too, with solid sales earlier this year for Corey Lewandowski’s “Let Trump Be Trump” and Newt Gingrich’s “Trump’s America”. More are expected. Anthony Scaramucci, known for his exceedingly brief tenure as White House communications director, has “Trump, the Blue-Collar President” coming out in October, while former press secretary Sean Spicer’s “The Briefing” is scheduled for July.

Spicer’s talk at BookExpo was well attended, despite some objections to his being invited, and conventiongoers lined up to meet Sally Field, Tony Kushner and Charlaine Harris, among others. They also stood (and sat) patiently for the once-notorious James Frey, whose “Katerina” will be publushed this fall by Gallery Books, a Simon & Schuster imprint.

A decade ago, Frey’s addiction memoir “A Million Little Pieces” was revealed as being extensively fabricated and the author himself was chewed out on television by Oprah Winfrey, but not before her initial endorsement had helped the book sell millions. But Winfrey and Frey later reconciled, Frey now openly writes fiction and Gallery is openly promoting his old work, whether billing “Katerina” as “Written in the same percussive, propulsive, dazzling, breathtaking style as ‘A Million Little Pieces'” or highlighting the memoir in a billboard ad for his new novel.

“‘A Million Little Pieces’ is a beloved and brilliant book, regardless of the controversy, so we did not think twice about using it in our advertising,” Gallery spokeswoman Jennifer Robinson said.

But one change was made for the convention.

“The Javits Center did reject our first design for the billboard as it showed a bit too much flesh,” Robinson said. “We had to make a little less of ‘Katerina’ visible.” CC