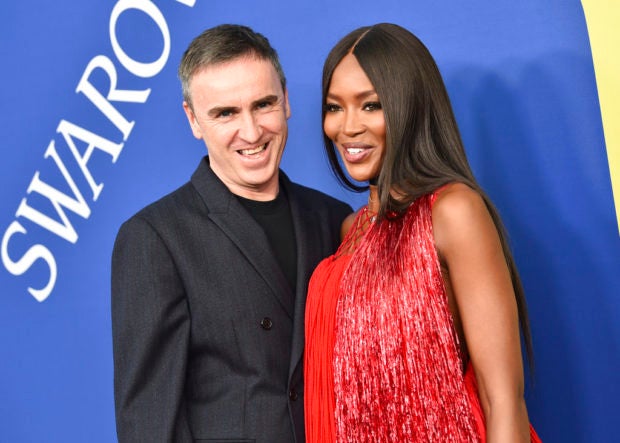 “Thank you, women!” Simons said, accepting the prestigious womenswear prize of the Council of Fashion Designers of America from presenter actress Cate Blanchett. It was actually the Belgian designer’s third CFDA award in two years; last year he won for menswear, too.

The CFDA awards are fashion’s answer to the Oscars, and a slew of celebrities were on hand at Monday’s ceremony at the Brooklyn Museum,’ hosted by TV’s Issa Rae — who pointed out she was the first person of color to host the annual event, and the first woman since 2009. Presenters included Oprah Winfrey, Lupita Nyong’o, Trevor Noah and Claire Danes, among many others.

One of the biggest draws of the night was Kim Kardashian West, who came — in a midriff-baring, clingy white ensemble by Rick Owens — to collect the inaugural Influencer award. “I’m kind of shocked that I’m winning a fashion award when I’m naked most of the time,” she quipped, before going on to tell the story of the publicist she’d hired seven years ago who told her she’d never achieve her goal of making the cover of a fashion magazine.

“Let’s find some more realistic goals,” Kardashian West said the publicist told her. When she later made the cover of Vogue, she noted, she made sure to send the publicist an autographed copy.

This year’s menswear winner was the streetwear label Supreme. “I never considered Supreme a fashion brand or myself a fashion designer,” said its founder, James Jebbia, accepting the honor. And the award for accessory design went to perennial winners Ashley and Mary-Kate Olsen, and their label The Row.

Veteran supermodel Naomi Campbell gave the evening’s most stirring speech as she received the Fashion Icon award — dressed, aptly, in a deep red, fringed number by Simons at Calvin Klein. She was introduced by Lee Daniels, who directed her in “Empire” and “Star.” Daniels praised her efforts toward diversity in fashion and her philanthropic work, and also told her: “I’m sober because of you. I thank you for saving my life.”

Iconic American designer Ralph Lauren received a new award, the CFDA Members Salute; CFDA chairman Diane von Furstenberg noted that the 78-year-old designer had won so many awards, they needed to invent a new one. Lauren, who wore faded blue jeans with his tuxedo jacket and bow tie, listened as a series of designers lauded him, including Vera Wang, Michael Kors, Tommy Hilfiger, Donna Karan and Alexander Wang.

“This is not the end,” Lauren told the crowd. “This is the beginning of fashion.”

Designer Carolina Herrera, who stepped down from the creative helm of her label earlier this year, received the Founder’s Award, presented by Caroline Kennedy. Kennedy described how Herrera had made her a memorable wedding gown and recently did the same for her daughter, Tatiana. She also spoke of Herrera’s relationship with her mother, Jackie Kennedy.

“Together they took over New York,” Kennedy said. “They didn’t talk about it, they just did it by looking better than everyone else.”

Winfrey presented the Media Award to Edward Enninful, the Ghana-born editor in chief of British Vogue, who declared: “British Vogue is about being inclusive.” American designer Narciso Rodriguez choked up frequently as he accepted the Geoffrey Beene Lifetime Achievement Award, presented by Danes, who told the crowd how when she wears his designs, “I always feel the most like myself.” Nyong’o presented the International Award to Donatella Versace.

Von Furstenberg was awarded the Swarovski Award for Positive Change, presented by Delaney Tarr, a student at the Marjory Stoneman Douglas High School in Parkland, Florida. Von Furstenberg noted that Tarr had just graduated high school the day before, and that she now is old enough to vote.

“But actually, I want Delaney to run,” the designer said. MKH

Who wore platform sneakers and an N-word belt at the CFDA Awards?