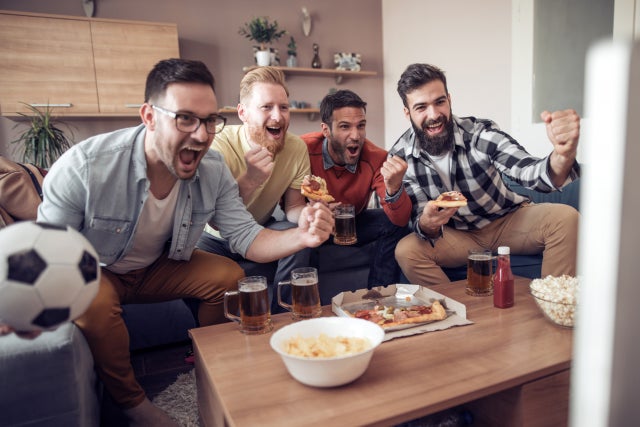 Research has shown that psychological triggers such as stress, anxiety, and anger -- emotions any sports fan can relate to -- can bring on a heart attack. © Ivanko_Brnjakovic / IStock.com

For football fans, the World Cup should be a time of fun with family and friends. But beware, experts say, it can also sicken or even kill you.

Research has pointed to a long list of hazards ranging from heart attacks and strokes, to unsafe sex, accidents, suicides, and a spike in domestic abuse.

“It is not just a game,” warned a 2010 study in the American Journal of Medicine which said major sporting events “can acutely increase cardiovascular event and death rates.”

Most at risk are patients with known coronary artery disease, it said, or those who find themselves in particularly stressful circumstances: “a passionate fan, a high-stakes game, a high-intensity game, a loss, and a loss played at home.”

Many a football fan may have shouted at the TV that they “nearly had a heart attack” when their team missed a shot at goal or let an opposing player through to score.

But this is not something to joke about.

Research has repeatedly shown that psychological triggers such as stress, anxiety, and anger — emotions any sports fan can relate to — can bring on a heart attack.

“We know that this is an exciting time but don’t forget about your heart health,” advises Julie Ward, a senior cardiac nurse at the British Heart Foundation.

Measures to reduce risk include using blood-thinning aspirin, meditation, and avoiding activities such as smoking, eating artery-clogging, fatty foods, or binging on alcohol or drugs.

Though not within the control of fans, winning or losing makes a difference too, according to one study in New Zealand.

It found a 50 percent increase in hospital admissions for heart failure, particularly among women, after a semi-final loss in the 2003 rugby World Cup.

By contrast, hospitalizations were lower after the country’s 2011 semi-final win.

It is not only our hearts we should watch.

One study noted an explosion during the 2014 World Cup in cases of “retinal vein occlusion” — a blockage of small veins in the eye that is also known as an “eye stroke”.

A common cause of vision loss, it is more common in people with cardiovascular disease. Researchers compared the number of cases treated at a German university eye clinic during and four weeks after the 2014 World Cup with the same period in 2013.

It found a definite increase, and said: “It can be assumed that the emotional strain caused by a World Cup is a risk factor.”

Why does the beautiful game stir up such dangerous passions?

Psychologists have suggested that sporting events can give people a sense of group belonging and shared identity.

There is also the sense of hope they provide, even for fans of teams that never win… Maybe this time!

With such a deep emotional investment and high expectations, failure can lead to crushing disappointment. And it can drive some to more than just tears.

A study last year found “a significant increase” in hospital admissions of young women in Tehran who drank poison during the four weeks of the 2014 World Cup.

Iran was eliminated in the knockout stages.

Conversely, in 2012, a study reported a “significant decline” in suicides in France during the four weeks of the 1998 football World Cup the country hosted and won.

A further threat to fans, experts warn, is risky behavior driven by drinking too much alcohol, leading to road accidents, unsafe sex, and violence.

Keeping an eye on alcohol intake is high on the list of “simple steps to stay healthy” compiled by Ward.

“Make sure you drink plenty of water to keep hydrated during the match,” she added.

“Also cut back on the drinks high in sugar or caffeine as these can affect your heart rate and rhythm,” she told AFP.

No need to cut out snacking altogether.

“But try and have some healthy choices in the house too — try hummus and carrot sticks, a variety of colorful fruit and some popcorn, either plain or spiced with paprika, chili or rosemary, for a lower-fat, lower calorie alternative to crisps and roasted nuts,” Ward recommended.

And don’t sit down for too long, she added. Get up and move around at least every 30 minutes for the sake of our heart. MKH

Neymar to play vs. Austria; Fred injured in Brazil training