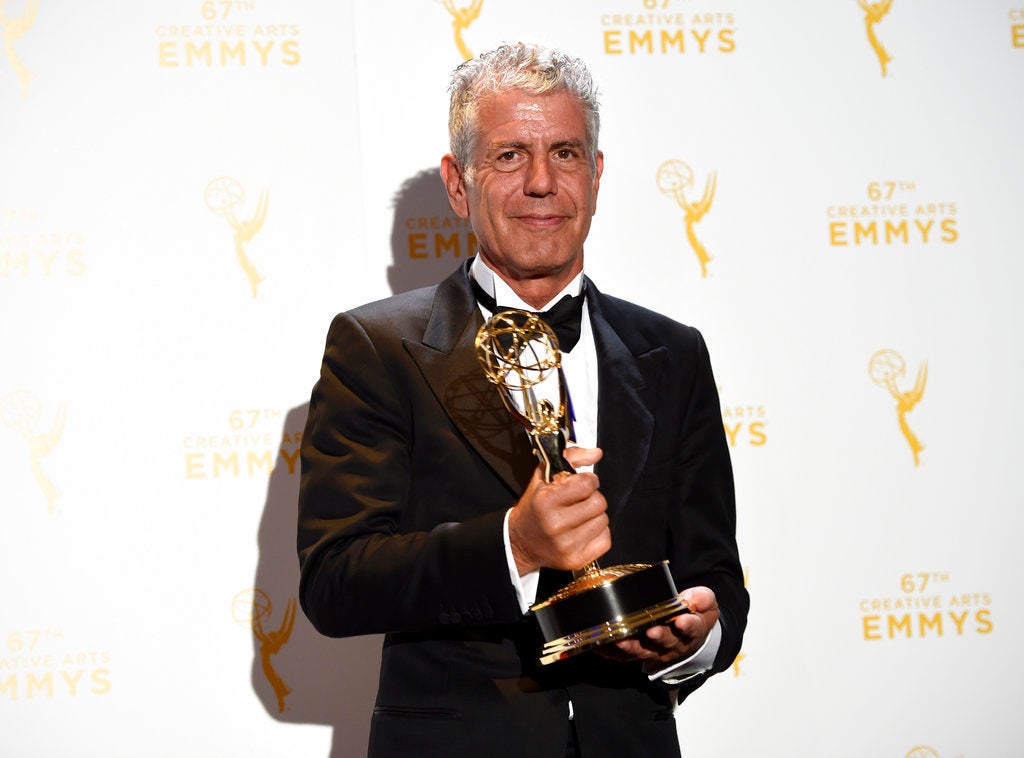 FILE - In this Saturday, Sept. 12, 2015 file photo, Anthony Bourdain, winner of the award for outstanding informational series or special for "Anthony Bourdain Parts Unknown," poses with his trophy in the press room at the Creative Arts Emmy Awards in Los Angeles. On Friday, June 8, 2018, Bourdain was found dead in his hotel room in France, while working on his CNN series on culinary traditions around the world. (Photo by Chris Pizzello/Invision/AP)

MINNEAPOLIS (AP) — A North Dakota newspaper columnist who received online vitriol in 2012 for her glowing review of an Olive Garden in Grand Forks said Saturday she was grateful that Anthony Bourdain came to her defense as others ridiculed her prose about the town’s hottest new Italian restaurant.

Marilyn Hagerty catapulted to internet fame after her Olive Garden review, in which she marveled about the chain restaurant’s chicken Alfredo, crisp greens and “two long, warm breadsticks.” Then, she learned what it’s like to go viral.

Bourdain, who died Friday in France at age 61, was among those who stood up for her on Twitter. The celebrity chef and TV host asked to meet her for coffee while she was on a media tour in New York, and he ended up publishing a book of her columns, “Grand Forks: A History of American Dining in 128 Reviews.”

In the foreword, Bourdain wrote: “Anyone who comes away from this work anything less than charmed by Ms. Hagerty — and the places and characters she describes — has a heart of stone. This book kills snark dead.”

Hagerty, who’s 92, said she enjoyed meeting Bourdain, whom she described as “handsome.” She said they talked for a couple of hours about her life, North Dakota and a birthday party he held for his daughter, who was 5 at the time.

“You just would like to sit and have coffee with him, or booze, or whatever he’s having,” she said. “To me, he was a warm person, and you liked to spend time with him because he was interested. He wanted to talk about me and my home … he just didn’t talk about himself and his interest in food.”

She went on to say: “It was just like talking to a friend.”

Hagerty said she knew Bourdain’s work was popular but admitted she wasn’t a huge fan.

“I never really could understand a lot of the things he did, why he’d want to do them,” she said. “But he wasn’t weird or kooky or anything. He was just a really pleasant person.”

Hagerty said she thought Bourdain, who wrote the bestselling book “Kitchen Confidential: Adventures in the Culinary Underbelly” and hosted TV shows including “A Cook’s Tour” and “Anthony Bourdain: Parts Unknown,” wanted to meet with her so he could make sure she wasn’t “some kind of a kook” before he decided to work on her book.

“I am sorry that Anthony Bourdain died. I’m especially sorry about the way he died,” Hagerty said. “And, of course, I’m forever grateful for the fact that he chose to enter in and take up my side in the dispute that I had nothing to do with.” NVG

Anthony Bourdain: The coolest dude in the kitchen