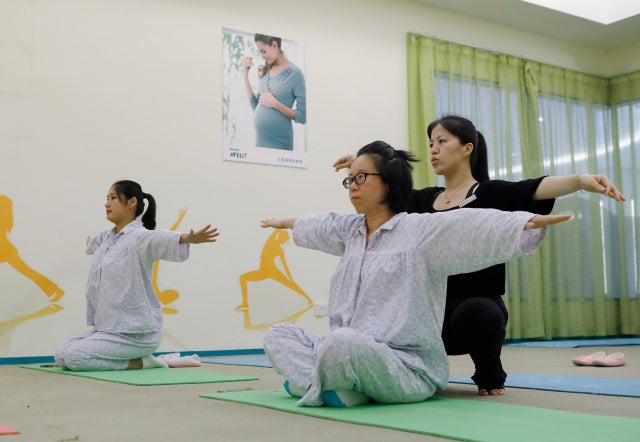 Yoga class starts shortly, the pristine massage center is open for business and cheesecake is served on a platter of pastries and fruit.

And then the muffled cry of a baby emerges down the hallway.

The setting may resemble a five-star hotel, but this is a “sitting center” on Shanghai’s outskirts where mothers pay up to 70,000 yuan ($11,000) a month to stay with their newborns.

Chinese culture dictates that mothers confine themselves after giving birth, also known as a “sitting month”. Such confinement was once widely practiced in many areas of the world and continues to be popular in other parts of Asia.

But as incomes rise in China, the sitting month no longer means being cooped up at home without bathing or visitors.

“We prefer to find a professional facility to take care of our baby. We have no experience in taking care of the baby or ourselves after birth,” said Yu Xueting, 34, a first-time mother, her weeks-old son “Kangkang” lying contentedly beside her.

Mother and son are accompanied at all times by a nanny who sleeps in the same room. Numerous specialists, nurses and cooks are on hand.

A photography studio captures those precious early days of life, while a “Mother’s Classroom” runs lectures for new mums to learn how to care for their baby — and themselves.

Dads can stay too, but usually just visit.

Yu, who works for IT firm Hewlett-Packard, said the lengthy stay “liberates our family”.

“If we do it at home (take care of the baby), then the whole family can’t sleep well. I can take maternity leave, but my husband needs to go to work.”

“Sitting month”, or “Zuoyuezi”, stretches back to about 200 BC and the Han Dynasty, said Elizabeth Hui-Choi, a lecturer at Hong Kong University’s School of Nursing.

Empresses would be well looked-after following childbirth, including a special diet and lifestyle to restore their “broken” body and prevent future illness, said Hui-Choi.

“They believed that treating the mother well would also bring good things to the baby, and it is still believed to be that way.”

Traditional Chinese Medicine (TCM) “also plays a very important part” in how most Chinese women still think after childbirth, dictating they should eat more of certain foods, such as ginger, and cut out others such as fruit, she said.

Some stop showering, washing their hair, or even brushing their teeth for the month, and won’t venture outside — TCM says these can upset the body’s balance.

Yu did not wash her hair for a week, but doctors told her that was unnecessary and the center recommends a more scientific approach that blends TCM and Western medicine.

Hui-Choi, a registered midwife trained in Western medicine, said some of the old rituals are unhygienic and that studies suggest strict observance of tradition can make women feel isolated, risking post-partum depression.

According to the Legal Daily, a state newspaper, the number of sitting centers in China has “exploded” from dozens in 2000 to more than 4,000 in 2017.

One reason is that Chinese today are now giving birth later in life — meaning grandparents are older and may not be able to help as much.

And Chinese are increasingly able to afford places like the Shanghai center, where staff fuss over every baby sniffle.

Demand has also ramped up since China began phasing out its one-child policy in 2015. Families can be too stretched with their first child to cope with a second, especially if there is no extended family to help out.

Sitting centers or self-proclaimed experts in “Zuoyuezi” are found almost anywhere that ethnic Chinese are found, including in North America, making it a big business with global reach.

However in Britain, doctors recently warned about the dangers of Chinese mothers locking themselves away after childbirth, fearing post-natal depression may go unnoticed or mums may avoid seeing a doctor for physical problems.

Xu Jingfang, baby son Kirk gurgling away beside her, said her British husband was initially skeptical.

“At first he thought it was a weird idea. He said, ‘You’re having a baby, not heart surgery,'” said the 30-year-old Xu, one of about 80 other mums at the Shanghai establishment.

Xu scouted similar centers including one in a high-end hotel, saying “all our friends and relatives” now opt for such care.

“It’s much easier. Here, you’ve got 24-hour care for the baby and someone to cook for you six meals a day,” added Xu, a phalanx of carers on hand to whisk away Kirk at the first hint of a whimper.

Xu said that while her parents and grandparents did not wash for weeks after birth, they accept that times have changed.

So will it be a shock to finally go home?

“I’ve hired a nanny at home. I guess life will be more interesting than here — sometimes I do get a bit bored — but also tougher.” NVG

Japanese woman scolded for becoming pregnant ahead of company schedule