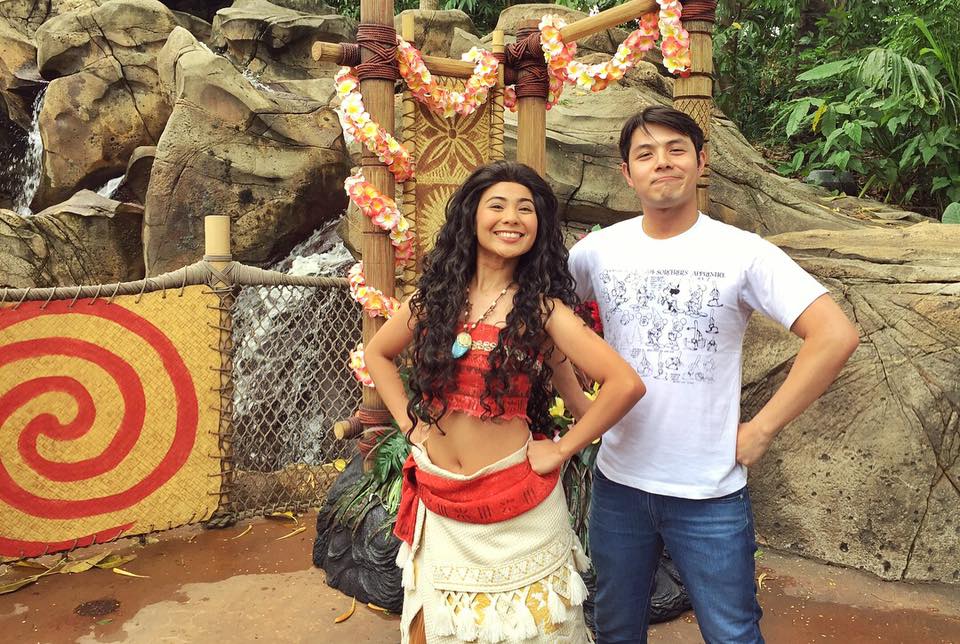 Disneyland with a dear friend? It’s all in a day’s work for Fred Lo and Rissey Reyes, who are the latest additions to Hong Kong Disneyland’s roster of Filipino performers.

Not that they ever planned on working in the same theme park at the same time. Reyes was already set to leave even before Lo attended a casting call. When she found out the day after New Year’s this year that she had booked the job, Lo was one of the first to know.

“He was ecstatic for me. And to our surprise, there was another round of auditions. I felt like a stage mom, pressuring him to do well in his audition and constantly bugging him about the results afterward,” says Reyes. “We imagined how cool it would be to take our friendship abroad and have each other in Hong Kong.”

The two first met in 2013, when Lo was alternating with Reyes’ boyfriend Victor Robinson III for the male lead in the Sugarfree musical “Sa Wakas.” But it was during their stint in “Hi-5 Philippines,” based on the Australian children’s educational television series, that they really hit it off.

They last appeared onstage together in ADHD Productions’ “Si Saldang, si Marvin at ang Halimaw ng Gabi” for Fringe Manila 2018. Since April, Reyes has been in Hong Kong; Lo arrived a month after.

“I was on vacation in Norway when I received the job offer,” Lo says. “I actually thought I didn’t make it because I hadn’t heard anything. Turns out, the guys from Disney just couldn’t reach my phone for some reason.”

The work now is something of a secret, as they’re contractually obliged to “preserve the magic.” (Based on their social media posts, Reyes appears to play the Polynesian heroine Moana, while one of Lo’s roles is that of the Genie in “Aladdin” for the half-hour musical “Mickey and the Wondrous Book.”)

But they both agree: It spells a world of difference to have a full-time job that pays well in the performing arts.

“I was a freelance actress in Manila,” Reyes says. “One day I’d get a high-paying gig; the next, I’d settle for anything to keep busy and keep earning. The financial stability of working for a company like Disney is something that’s just not available in the Philippines.”

“Freelance performers have to work long hours, and even multiple jobs, only to earn a meager amount and have a portion of it go to taxes,” Lo adds. “I realized the Manila entertainment industry has very little to offer, and then you still have to factor in traffic in the city.”

“Frankly, Filipino artists deserve so much more than what the local scene can currently give them,” Reyes says. “Until our profession can be treated like a real profession, with just compensation and protection for workers, there will always be a steady stream of local artists searching for greener pastures abroad.”

Still, it’s not all fun and games working for the world’s smallest Disney theme park. Performing in the self-touted happiest place on earth is still work.

“I do plan to go on trips, maybe hike some trails,” Lo says, “but so far, all I’ve done on my days off is sleep and shop.”

Lo admits that although he’s worked on a cruise ship for a few months some years back, moving to another country is totally different. “There were moments during my first few days [in Hong Kong] when I really felt alone, living in a hotel room by myself.”

For Reyes, being away from her loved ones has been the toughest hurdle. “My mama was the best stage mom growing up, so it’s frustrating for her that she can’t be physically near me everyday anymore. And it’s heartbreaking to be unable to see Victor’s work onstage, and also, just being away from our Maltese, Winter.”

To help with the homesickness, Reyes, a self-confessed grandmother in a 24-year-old’s body, goes grocery shopping to cook mostly Filipino viands.

“The fruits and vegetables are really cheap,” she says. “But there’s also the language barrier. Some locals know English, but some cab rides or moments at the cashier can get lengthily awkward.”

“Thank God for technology,” Reyes says. “My loved ones and I have arranged lots of trips to and from Hong Kong and Manila to visit each other.”