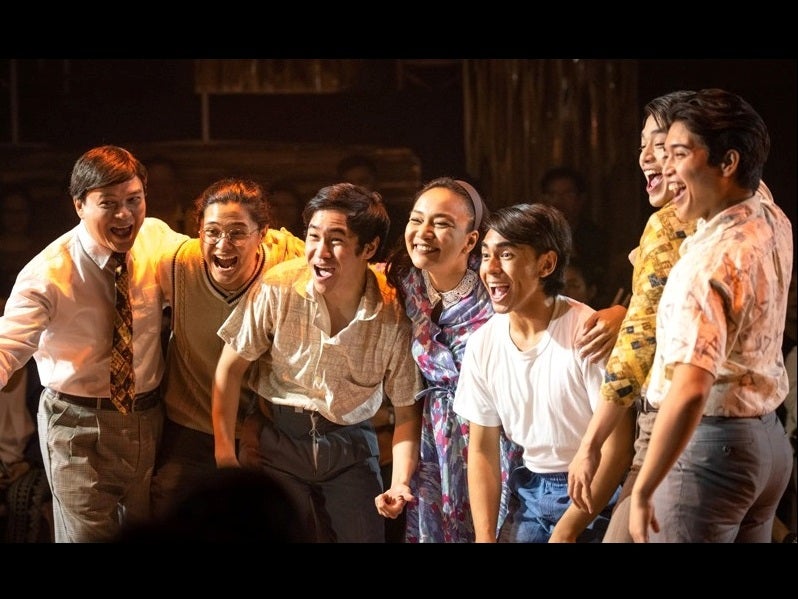 Recently, I had the pleasure of catching a thesis play that afforded me my best theater evening since Dulaang UP’s “The Kundiman Party.”

I went to “Dekada ’70” (staged at Bonifacio Hall at the UP School of Labor and Industrial Relations) with expectations that it might well be a notch above the general run of such efforts. An adaptation of Lualhati Bautista’s iconic novel of the martial law era (I had read the novel and watched the film version), it was the thesis production of Pat Valera (for both adaptation and direction), who had previously already staged “Mula Sa Buwan” at Ateneo’s Irwin Theater to popular and critical success. And its leads were the stellar real-life husband-and-wife team of Julien and Stella Cañete-Mendoza (the latter fresh from “The Kundiman Party”).

But millennials made up its larger cast, many still in university or just out of it (though some names—Nicco Manalo, Jon Abella, Gel Basa—would be familiar to aficionados of the theater scene). As well, the music—the production, rather audaciously, turned the material into a musical—was a collaboration between Valera and young composer Matthew Chang.

Initially, I had qualms about the conversion into a musical. In particular, I feared the rousing ensemble numbers of defiant activists would overwhelm the deeply personal and familial drama that had been the core of the novel and film. Yet as the production progressed, all the strands—the political and the personal, the social activism and the feminism, the violence on the streets and the small family interactions, affectionate and conflicted and even petty—came together as a powerful whole, giving deepened context to each other.

It was a wonderful adaptation, able to add dimensions to the original material with the stirring music, which was alternately militant and poignant (the lament of Bingo at the funeral of his brother was especially indelible, as was the mother Amanda’s song at the end of her soliloquy), and the employment of the superb ensemble to give flesh-and-blood social context.

Valero’s direction was excellent in orchestrating the rapid shifts of scene actions and moods, including the agile and imaginative deployment of the very economical stage props (basically bare chairs, tables and benches). One of the best introduced touches was the street theater scene, a brilliant counterpoint to the affecting dialogue between Amanda and her third son Em as she read his script, an anthem to the value of cultural work in a struggle.

(On the other hand, I was more ambivalent about the explicit depiction of the “salvaging” of the youngest son Jason, preferring the original understated but perhaps more painful “desaparesido” treatment. But perhaps it was intentional to draw a parallel to current EJK events.)

As a thesis production, there were clearly budget considerations, but the directorial flair so well harnessed the design supports—stage (Ohm David), lighting (Meliton Roxas Jr.), movement (Jomelle Era) and costumes (Hershee Tantiado)—that as it was, it could well stand being presented to a wider audience, as it deserves to be.

The acting performances were superb, from the versatile, passionate ensemble to all the supporting roles. Special mention must go to the eloquently understated wives (Gel Basa and Matel Patayon), and especially the actors playing the five sons, each one projecting individual, sometimes conflicted, personalities.

Obviously, the most blazingly dramatic role went to Jon Abella as Jules, but special kudos should go to Esteban Fulay Jr. as the more nuanced Em. His extended “quiet” scene with his mother was the play’s most moving moment.

Above all were the two parents. Mendoza as Julian was the infuriating embodiment of traditional patriarchy, overbearing but affectingly vulnerable in the end. And Cañete-Mendoza gave a spectacular performance as Amanda, running the gamut from yearning but loyally repressed housewife to uncomprehending and anguished mother to defiantly liberated and self-realized woman.

At the end, as she stood at the head of the full ensemble and her family, her clenched fist raised, one just had to give a standing ovation—to the actress and to the role she portrayed. And, by extension, to the whole ensemble and its director for such a galvanizing production.