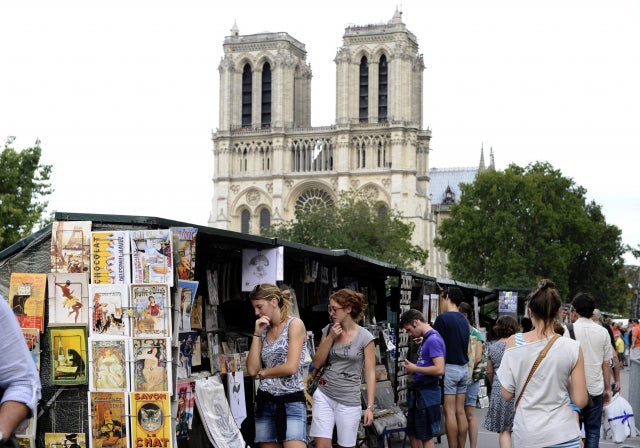 Nearly 1,000 stalls belonging to 226 registered booksellers stretch along both sides of the riverbanks -- which have already been on UNESCO's heritage list since 1991. © MIGUEL MEDINA / AFP

After baguettes and bistros, second-hand booksellers along the banks of the Seine River in Paris are pushing to be recognized as one of the world’s cultural treasures on UNESCO’s list of “intangible heritage”.

Calling themselves “the biggest open-air bookshop in the world”, the “bouquinistes” and their dark green stalls have been a fixture of the French capital since the 17th century.

Nearly 1,000 stalls belonging to 226 registered booksellers stretch along both sides of the riverbanks — which have already been on UNESCO’s heritage list since 1991.

“We are spreaders of knowledge, with phenomenal diversity, incredible personalities — we play almost a philosophical role in the city,” said Gildas Bouillaud as he dusted off his collection in the shadow of Notre-Dame cathedral.

Even Francois Mitterrand continued to visit the stands during his 1981-1995 presidency, strolling with two of his bodyguards in tow.

Yet despite paying no rent for their spots, making a living has become increasingly difficult, with some earning more money from tourist trinkets than hard-to-find tomes from France’s literary giants.

“Faced with the crisis among booksellers, the competition from multimedia and this increasing lack of education, we’re hoping to put the spotlight on us,” said Jerome Callais, president of the Bouquinistes association.

“We’re as important for tourists as the Eiffel Tower,” Callais added.

‘Antiques of the city’

He points out his peers: Bernard who “only does detective stories”, while another, further along, deals only in books about Algeria.

Mathias himself does “only history,”  in particular the Napoleonic period.

On a recent sunny day tourists were stopping to look, but most left empty-handed. “Out of 100 clients, only two or three buy something,” he says.

The city only allows one of a seller’s four allotted stalls to be stacked with keychains, miniature Eiffel Towers and other tourist favorites.

And for every pleasant day spent outdoors, there are others where the rain doesn’t ever seem to stop.

“We are among the antiques of the city, but we pay dearly for this freedom: it’s physical work,” Michelle Huchet-Nordmann said at the stall she has kept near the Academie Francaise for 30 years.

Olivia Polski, the City Hall official in charge of commerce, is pushing the bouquinistes’ campaign with the culture ministry, which has the final word on candidates who will be put forward in March 2019.

“They need to make it known that they are here,” Polski said.

She is also hoping to convince UNESCO to deem the postcard-perfect bistros and terraces of Paris a world heritage treasure.

Their hopes have been fanned by the UN agency’s decision in December to grant Naples’ pizza makers official heritage status.

“It’s one of the last typically Parisian professions,” Bouillaud said of the bouquinistes, admitting he doesn’t make a living selling his books —he gets by mainly on unemployment benefits.

“We need to be protected for the sake of humanity!,” Bouillaud exclaimed. MKH