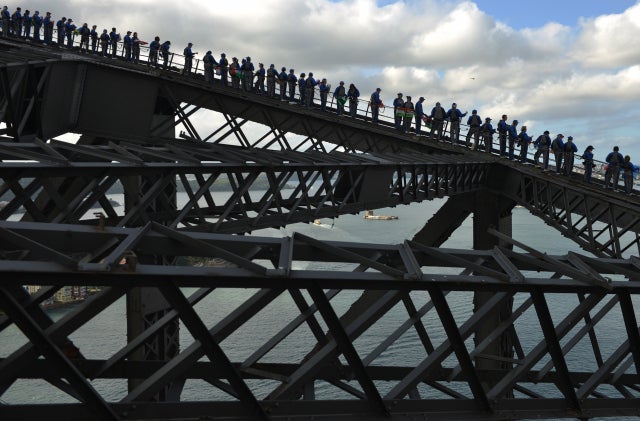 Climbing the so-called Coathanger -- one of Sydney's most-photographed landmarks and the centrepiece of the New Year's Eve fireworks -- has been a bucket-list attraction for celebrities and tourists. Image: Peter PARKS / AFP

One of Australia’s top tourist attractions the Sydney Harbour Bridge is set to get a “game-changing” makeover with new climbs and interactive technologies, officials said Friday.

Climbing the so-called Coathanger — one of Sydney’s most-photographed landmarks and the centerpiece of the New Year’s Eve fireworks — has been a bucket-list attraction for celebrities and tourists.

It has been run by the same operators BridgeClimb, which pioneered the activity, for two decades, but the New South Wales state government said it was time for fresh ways of exploring the imposing structure.

“The government is excited to be ushering in a new chapter for what is one of Sydney’s, if not Australia’s, most iconic structures,” a NSW Roads and Maritime Services spokesman said.

He added that the change of management, which starts in October, was a “game-changing opportunity that will lead to both enhanced and new experiences”.

Some 13 local and international firms were in a bidding war for the lucrative 20-year contract, which reportedly brings in some Aus$50 million (US$37 million) in annual turnover for BridgeClimb.

The new operators Hammon Holdings said they would make the structure more affordable and accessible.

“Our vision is to recreate the people’s bridge,” chief executive David Hammon, who runs a tourist attraction in the scenic Blue Mountains north of Sydney, said in a statement.

“We will be exploring ways to safely expand access to new areas of the Bridge, use innovative technology to bring the bridge to life, and make its history and connectivity a more central part of the experience.”

BridgeClimb brought in some Aus$17 million in profit last year for its current owners, founder Paul Cave, who came up with the idea, Australian fast-food mogul Jack Cowin and retail billionaire Brett Blundy, according to The Australian.

Cave said it was a privilege to run the business and stressed that BridgeClimb has had “an unblemished safety record, without one serious injury in 20 years”.

The bridge, which links the northern and central parts of the city, was opened in 1932 and is the world’s widest and tallest steel-arch bridge. NVG