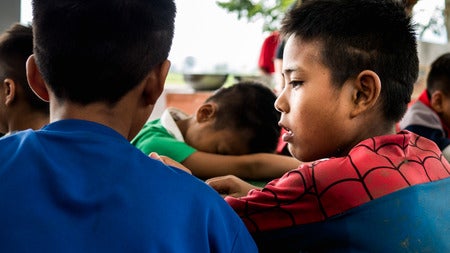 One 25-year-old man gave up the prospects of securing a high-paying job to become a charity worker and a father figure to troubled young boys from different walks of life.

Chang Ka-fai is a “dad” to about 20 kids, working in a care home under the charity organization Po Leung Kuk. According to the South China Morning Post last June 17, the organization specializes in taking care of boys who come from problematic families, usually those who have violent, abusive and drug-addicted parents.

Chang spent two years in a secondary school where he worked as a special education needs counselor. For Chang, the job limited him to only spending time with the kids during short recess breaks and after school hours. Unsatisfied with this, Chang decided to look for a job that would allow him to spend longer periods of time with kids, thus his working in a care home for troubled boys.

One of Chang’s jobs includes waking up the boys for school everyday, and on weekends, taking them on city trips and haircuts.

“Sometimes I’m like a father to them, having to teach them what’s right and wrong,” Chang was quoted as saying. “Sometimes I’m more of a brother or friend, I play computer games with them, have heart-to-heart chats and, sometimes, I’m their tutor and I teach them homework.”

The care home houses around 130 kids, some of them following a strict timetable during weekdays, while others go home during the weekends to see their family. It’s no easy job, as per Chang, as it’s difficult to develop a “sense of security” in the care home.

“They clearly know that this place isn’t their home, and they know that we aren’t their real parents,” Chang said in the report. “Each kid’s background is different. It takes time to develop a bond with them for them to feel like we are people they can trust.”

Chang has not married yet nor has children of his own. Some may think that he is still young to take on the role of a “dad” to the troubled kids, but Chang himself believes that his age and lack of experience aren’t obstacles but advantages. He cited that boys don’t feel such a distance between them because of his young age, saying. “It becomes easier to talk to them and reason with them.”

“I try my best to show them what it’s like to be a man since some of them lack a father figure in their lives,” he added. “Although we can never replace their real dad or mum, we can only hope that we become alternative parents for them in this temporary home.” Cody Cepeda/JB