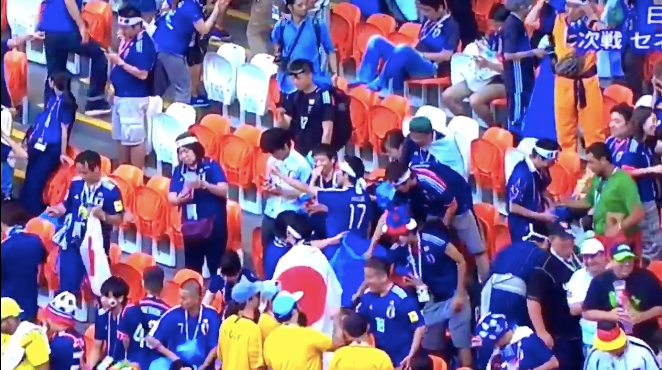 Japan is known for the many positive attributes its citizens live by. Recently, Japanese commuters awed the world when it reacted to a train delay by holding a drinking party and gymnastics show.

This time, FIFA World Cup fans from all around the world applauded them for their discipline when it comes to proper waste disposal.

In a short video uploaded by a Twitter user julie (@pinkys421) last Tuesday, June 19, Japanese fans are seen cleaning up the trash in their sitting area. It appears the fans have intentionally brought with them blue garbage bags for this purpose.

Japan won the Group H opener against Colombia, 2-1, becoming the first Asian football team to win against a South American team. While some may think that their clean-up has something to do with celebrating their historical win, ardent World Cup fans would not think so.

In the 2014 FIFA World Cup held in Brazil, Japanese fans captured the world’s attention after they were seen picking up the trash in their stadium stand. That was after Japan failed to triumph against Ivory Coast. They also cleaned up after their games against Greece which ended in a draw, and Colombia with whom they lost against.

Win or lose, or even in a draw, Japanese fans continuously prove that their discipline, particularly when it comes to cleaning up after themselves, is not determined by their triumphs or losses in the game — something that makes them winners in the eyes of fellow football fans. JB