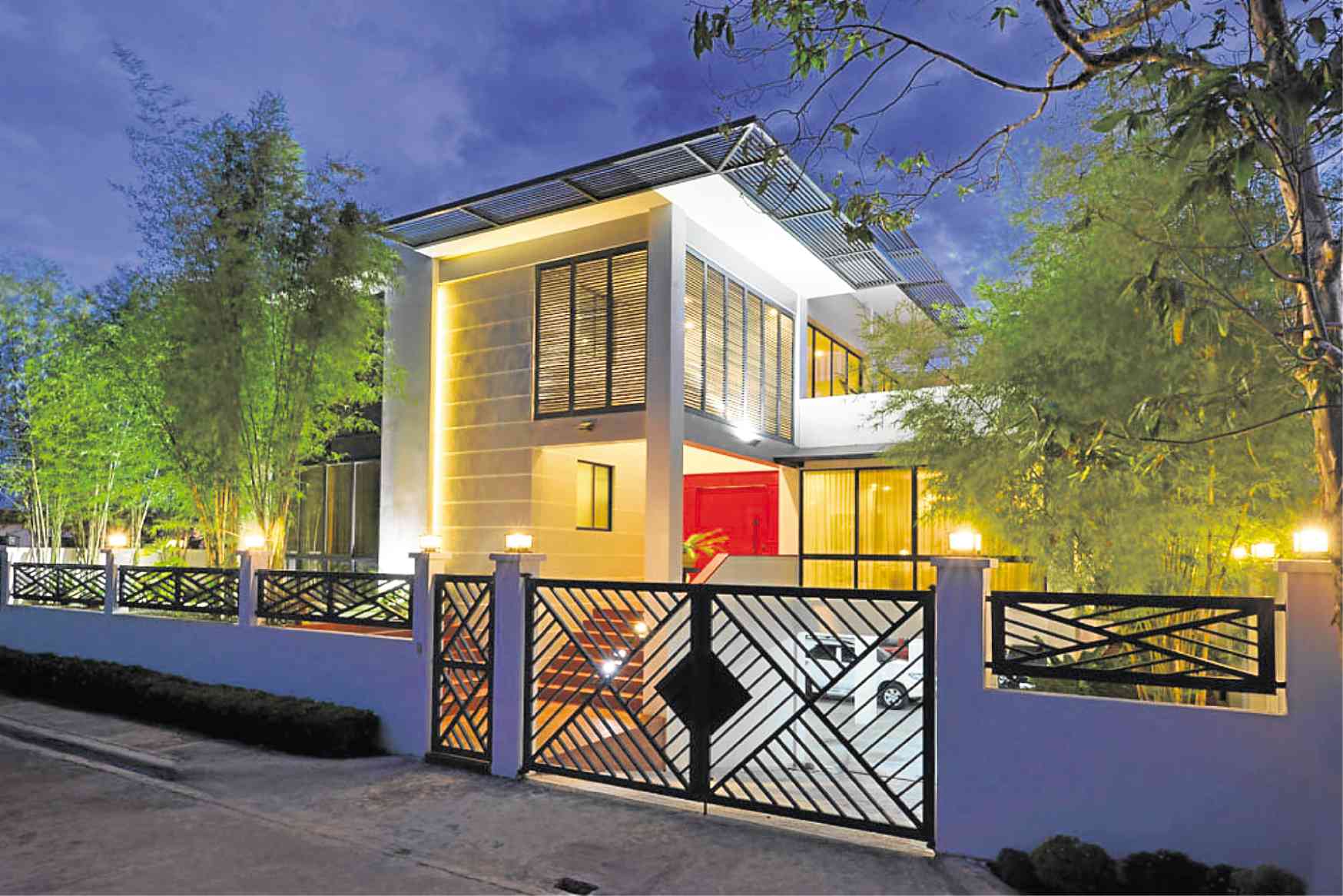 Evening light heightens the contrast between the all-white façade of the Dingcong house and its single touch of color—the red door.

Balik Bacolod: The return of the flamboyant native

Jojie Dingcong, successful businessman and effervescent manager to numerous movie stars and to a beloved concert queen, has touched base with his roots in Bacolod City—perhaps one of a few Bacolod natives who are going back to live in their home city, even if only on weekends, after their hectic lives in Metro Manila.

Is this a slow-building return migration of city slickers to Bacolod?

Having lived in Manila for so long, Dingcong said it was time to build a place in the city he was born and raised in. Dingcong is known in the lifestyle and entertainment industries for representing award-winning actor Derek Ramsay.

“My work is in Manila but I plan to visit Bacolod more often and not just on weekends but for longer periods. And when the time to retire comes, I intend to stay in Bacolod for good,” he explained to Lifestyle on our recent visit there.

“So I decided it was time to build a place that felt more permanent than a guest room or hotel room. After all, Bacolod is just barely an hour’s flight away from Manila. The Manila-Bacolod route has 10 flights a day. It’s easier and faster to come here than to drive around Manila.”

The kind of house he had in mind was more than just a bachelor’s pad and certainly much larger than a guest room. He already had a vision of the house for some time. It would be very modern and should reflect his tastes and character. To be the architect who’d make his dream house a reality, he chose an old schoolmate from La Salle Bacolod, Omon Maravilla.

“I wanted an architect who understood my vision, and somebody I could argue with if he was opposed to my ideas,” he said with a laugh.

Maravilla was the ideal architect for Dingcong. Building his initial practice abroad, he’s one of the city’s finest architects and had he been in the medical profession, he’d have impeccable bedside manners.

His affable demeanor is a nice contrast to his client’s
exuberant way of getting things done.

“The architect in him would sometimes say ‘NO’ to what I want. And I as an old friend would fight him to get my way. I’d usually win,” Dingcong said with a laugh, exaggerating the personal dynamic between friends.

The collaboration between the client and the seasoned architect is a multilevel house that’s a showcase of modern Asian and tropical architectural themes—exteriors in immaculate white, ample glass and high ceiling. It’s elegant minimalism.

Yet when it was time to furnish the place, minimalism apparently was far from Dingcong’s mind.

Recalled Dingcong, “I wanted the front door painted red. He wanted something that is normally used for tropical houses. I said ‘No, no…’ It has to be red. It’s one of my favorite colors. I love cheerful colors. I want chaos, or organized chaos.”

But then, if organized chaos was the rule of the day, why have a minimalist setting?

The answer lies in how Dingcong mixed his streamlined furniture, antiques and extensive art acquisitions.

The interiors channel an art gallery, except that, unlike a gallery, the space is cozier and more personal—Dingcong took great pains to put together his living and dining areas.

As soon as one steps inside the house, one is in awe of its cathedral ceiling and an encompassing view of the artworks that hang from the wraparound balcony. The second level instantly comes to full view.

One side of the second level is a panoramic glass window, which allows the sunlight in. The rays of light and the play of light and shadow help define the time of day in this house, and create patterns.

At first glance, the furniture and décor seem like a mismatch. It’s as if various styles of home accessories were placed randomly. But as Dingcong stressed, this is organized chaos.

Maravilla noted that to appreciate this house better, one must look at it from the outside to see the entire picture.

As in a gallery, every wall space has a colorful painting, from the ground to the second floor. A distinctive piece of sculpture is ensconced in corners. There are paintings by
Bacolod-based artists Charlie Co, Raymond Legaspi, a by-now iconic painting of Martin Honasan, and the acclaimed ballerina series of Sandra Fabie-Gfeller.

There are sleek sofas and tables by Philux.

The house is an eclectic and psychedelic work of art set in modern architecture. And yes, Dingcong’s red front door looks perfect in this colorful set-up— a showcase that would have done Andy Warhol proud.

“It’s funny that Andy Warhol has come up in our conversation,” Dingcong said. “I’ve always been an avid admirer of Warhol. I love his art and the colors he chose. I used to read almost every issue of his magazine, Interview. Warhol inspired my own style.”

Ultimately, the Dingcong residence resembles a large art gallery. Turn toward any direction and you’ll see a painting.

It’s easy to imagine an art show happening in the house, with an elegant cocktail party attended by Dingcong’s famous friends.

When Lifestyle was given a tour of the house, Dingcong’s house guest for the weekend was busy photographing the place for her Facebook page— Pops Fernandez.

Yet the house, as glamorous as it looks, belies the primary reason it was built. It’s really a family-friendly home.

Dingcong wanted a big house so that his two siblings and their own families can live in it as well. They now have their rooms in the house.

“The main reason I built this is for the family to be together. I grew up in Bacolod, we all grew up together. I think the family should always be intact,” he said.

“Each of our bedrooms is situated in different sections of the house. This allows us to have privacy. My siblings can spend quality time with their respective families without me or the other sibling overhearing them. But we do have our meals together. We go out together.”

It was after finishing college that Dingcong moved to Manila to find work. “It was in the late 1980s. At that early stage I already wanted to be a talent manager.”

He found work in the Manila Film Center’s Experimental Cinema of the Philippines (ECP) and later in the government TV network PTV-4, and the Music Museum, which was Kuh Ledesma’s theater venue in Greenhills.

Through the people he met, he found himself producing concerts for the likes of Martin Nievera and Fernandez. His exciting career in the world of entertainment went into full blast when the stars started approaching him to manage their careers.

He’s become a popular and respected figure in the industry and he’s managed his earnings wisely.

Still, a life attending concerts and movie premieres, and socializing with celebrities hasn’t changed the way Dingcong feels about his family and his roots. As he put it, “One should never forget about where he came from and never forget one’s family. This house allows us to stay together.”

Dingcong’s glitzy house in Bacolod does reflect his personality. Like the house, beneath his flashy façade is a warm and admirably family-oriented man. –CONTRIBUTED